City Council’s April 20 agenda was relatively light, and the regular meeting adjourned at a merciful 8:30pm. But the week carried plenty of business, with CodeNEXT on Tuesday, budget preview on Wednesday, and Thursday's advocate and activist pressure on policing. The draft CodeNEXT maps were released Tuesday morning, with a bit of press conference fanfare from Mayor Steve Adler, a work session exposition by the code consultants, and a persistent public buzz of “Are you kidding?” the rest of the week, as residents checked their neighborhoods and wondered if it (and they) would survive a year of public meetings and revisions. (“Dawn of the Code,” April 18)

The next morning, Council hosted the five-year financial forecast and the city budget preview, learning that the boom years and city revenues are moderating, they can expect a tighter budget year for FY 2018, and by the way: There’s about $48 million in anticipated new expenses (everything from employee pay raises to police body cameras) that will either have to be squeezed into the new numbers, or else endure a buzz cut.

Next to those two ongoing tasks, Thursday’s regular meeting was a virtual cakewalk, although Council did manage to free Lemonade Day (May 6) from the dismal regulatory burdens of the administrative state, enabling young entrepreneurs to set up a juice stand without the permits, fees, and licenses normally associated with food services. The largely symbolic and celebratory proposal provoked a Randian outburst from District 8 Council Member Ellen Troxclair, saying she would work to free all lemonade stands henceforth from such bureaucratic obligations – which have been enforced against children’s lemonade stands precisely … never.

Troxclair’s declaration prompted the mayor to respond (to both laughter and groans), “It's good to hear you’re supportive of this item. … I thought somebody was about to try to turn lemonade into lemons.”

Lemonade Day and most of the rest of the agenda served largely as preamble to the most contentious matter of the day’s discussions, although it didn’t start that way. The briefing of the day, delivered by Tom Stribling of the city’s Labor Relations Office, was a seemingly unremarkable update on the status of the three public safety “meet-and-confer” contracts with the public safety unions: the Austin/Travis County EMS Association, the Austin Firefighters Association, and the Austin Police Association.

Stribling provided a sort of Contracts 101 for the Council, recounting the recent history of public safety pay raises and their historical logic, the status of current negotiations, and (in response to prior Council inquiries) the potential outcome of an “impasse” – when the city and union can’t agree and a contract expires. He said little about policy matters, beyond noting that recent Councils had directed that Austin employees be paid at or near the top of the Texas market. 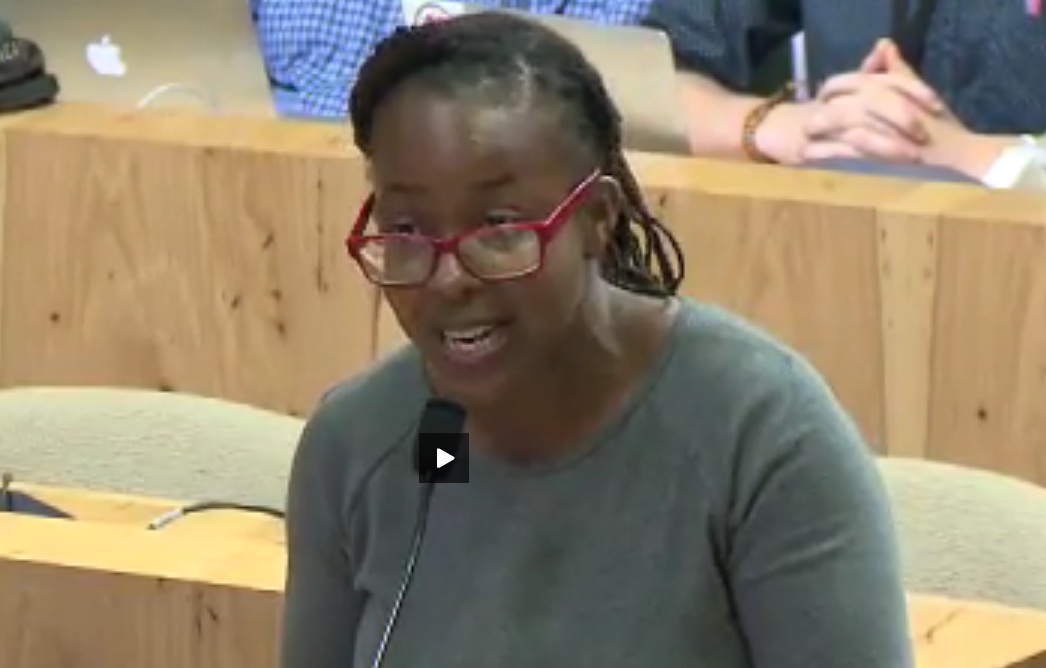 Nevertheless, when the matter was opened for public comment, local advocates and activist groups seized this occasion as their best opportunity to press the Council specifically on police accountability and transparency. Several dozen witnesses, beginning in the afternoon and then carried over the dinner break into the evening, demanded that any future contract provide better accountability from the Austin Police Department – especially over “critical incidents” (e.g., shootings or other uses-of-force) – stronger powers for the Office of Police Monitor, and much greater transparency for the monitoring and disciplinary processes over police officers. There were also calls for a freeze on APD’s budget, and more funding for social services as a better long-term route to public safety.

The comments ranged from those asking for more authority for the Citizen Review Panel – attorney Rebecca Webber, a member of the CRP (also current chair of the Public Safety Commission), specifically recommended (among other things) that CRP inquiries, deliberations, and recommendations, currently tightly restricted by the contract with APA, be made more widely available to the public, whether or not the APD chief imposes discipline on an officer in a specific case.

Webber’s CRP colleague, Dominic Gonzales, reiterated Webber’s comments, and said CRP members also believe that complainants are not receiving adequate or consistent information about the outcome of their complaints. He noted that many people had come to Council to pursue the matter, and told the dais, “There’s a clear mandate for you all to take action to ensure that we strengthen citizen oversight with the police.”

Then followed testimony from various sources, both individuals and representatives of larger groups – Austin Justice Coalition, Communities of Color United, Counter Balance ATX, Black Sovereign Nation, et al. – ranging from those (most) agreeing that the CRP process needs strengthening to those who speculated that a negotiating impasse (which would, among other things, eliminate the “toothless” CRP and return APD hiring and promotions to Civil Service standards only) might not be a bad idea. The AJC has taken the most systematic approach to the APA contract, and has posted on its Facebook page a detailed recital of the changes it advocates.

The most emotional testimony came from relatives of those shot by police officers, under various circumstances. Cluren Williams, brother of Lawrence Parrish – shot several times by police April 7 after, police charge, he brandished a rifle – asked that the Citizen Review Panel be strengthened, and that more video evidence be made available of critical incidents.

Amanda Lewis read a letter from a cousin of David Joseph, shot and killed by Officer Geoffrey Freeman in February of 2016. The 17-year-old Joseph was naked, unarmed, and apparently delirious, and Freeman shot Joseph a few moments after encountering him. (A grand jury declined to indict Freeman, but he was dismissed from the APD; the Joseph family received a $3.25 million settlement from the city.)

Joseph’s cousin Vanessa wrote a letter of eulogy for him, as well as advocacy for a better police accountability system. “The last thing any of us need,” she wrote, “is the invention of oversight programs that will continue to be underfunded, neutered, and neglected, like much of what is currently in place. And particularly, the office of the police monitor needs your support because it is our support. …”

Nearly all the witnesses pressed Council for a stronger accountability system, although in his testimony, APA President Ken Casaday reminded Council and the audience that the meet-and-confer contract is not imposed, but negotiated. He pointed out that the CRP came about via contractual concessions by the union, and that certain rights – e.g, that accused officers be given time to compose a response to charges – arose because officers, unlike accused civilians, are required to provide a response. Casaday also denied any involvement of APD officers with immigration detainers, to which someone shouted, “Lies!” evoking a rebuke from the mayor. D7 CM Leslie Pool asked Casaday to distinguish between the role of APD and that of the Travis County Sheriff’s Office, and he said once arrestees are delivered to the jail, police officers have no further involvement with their status or the TCSO’s relations with immigration authorities.

The briefing was not an action item – labor relations spokesman Stribling was somewhat caught off guard by the broad policy issues raised in the discussion – and Mayor Adler told Council that budget work sessions would provide a fuller occasion to consider what they had heard Thursday, and suggested Council might consider setting a “fixed percentage” of the General Fund for public safety spending – currently just shy of 68% of the GF (operating) fund.

D4 CM Greg Casar responded to the issues raised by the public testimony, telling his colleagues, “I can't in good faith support the next contract unless we have significant improvements in accountability and transparency.” D6 CM Jimmy Flannigan said he concurred with Casar, adding, “I think transparency is key.”

That concluded Thursday’s highest drama, although Council did act on several other matters:

• Get Smart: Approved funding of a joint “Smart Trip Program” with Capital Metro, aimed at encouraging and educating residents to use public transportation and thereby reduce traffic congestion. Some council members were skeptical, but Transportation Director Robert Spillar said a pilot version had shown good results, and that a relatively small increase in ridership in a “travelshed” (i.e., akin to “watershed”) can show substantial ripple results on congestion.

• Growing Bowie: Approved (amended but passed) a land use swap with Austin ISD near Bowie High School, allowing the school to expand on neighboring lands otherwise protected in the Barton Springs Contributing Zone, in return for other AISD lands not suitable for construction but also to be protected.

• Unidentified Rolling Robots: Withdrew, temporarily, the proposal to explore a pilot program for Starship Technologies to test in Austin its autonomous, sidewalk-rolling delivery robots: the posting language did not actually mention “robots,” meaning the issue will have to return on another day. Otherwise, some credulous agenda-reader (perhaps an Alex Jones enthusiast) might conclude that someone would be piloting real starships around Austin – raising the hysterical possibility of another War of the Worlds.