Still No Vote on the Bathroom Bill "Compromise"

After five hours of public testimony, HB 2899 sits in limbo

Wednesday saw another late night at the Capitol. The House’s State Affairs Committee heard public testimony on House Bill 2899, the supposed “compromise” to the bathroom bill. Though transgender activists and allies arrived for the hearing as early as 8am, the committee didn’t start on 2899 for another 13 hours. 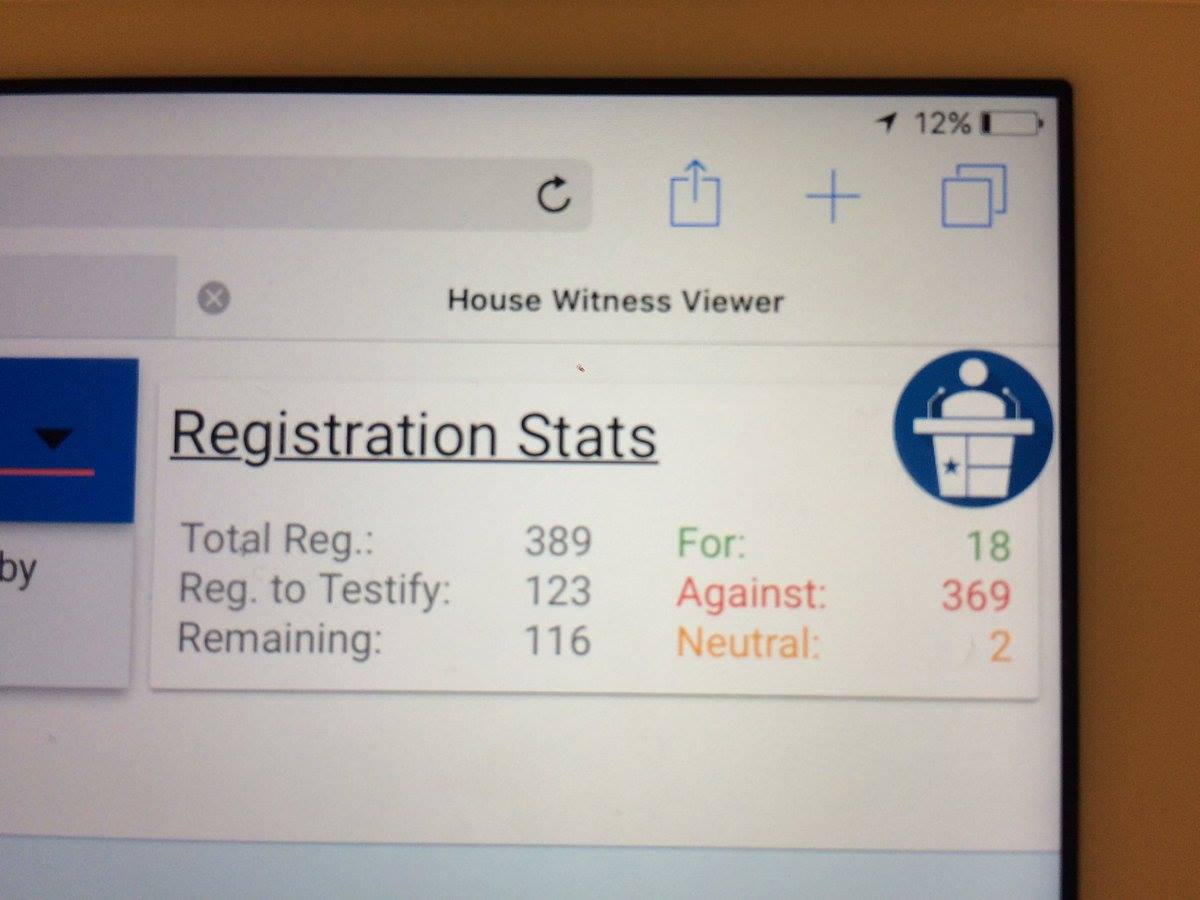 A screenshot snapped by Rep. Joe Moody, D-El Paso, showing the numbers of those registered to testify for & against HB 2899, shortly after midnight on Thursday. (Photo via Twitter)

The public testimony portion began well after 11pm and went through the night, ending just shy of 5am on Thursday.

More than 400 people signed up to speak, but according to the Statesman only 72 managed to testify. One attendee posted a photo on Facebook showing that another 369 people registered their opposition of the bill that’s being touted by its author Rep. Ron Simmons, R-Carrollton, as a more considerate version of SB 6. (Only 18 people registered in support of it.)

The original bathroom bill, the Texas Privacy Act, would override nondiscrimination ordinances and force trans and gender nonconforming folks into restrooms and dressing rooms that align with the gender listed on their birth certificate. Instead, HB 2899 slyly copies North Carolina’s compromise bill by simply removing all existing city nondiscrimination ordinances that have put bathroom protections in place. In addition, it would ban all public buildings and school districts from enacting or enforcing any gender affirming protection not abiding with state law.

If passed, HB 2899 would not allow any exceptions including cases of parents with young children, which even SB 6 offered. But there’s another threat with HB 2899. While Simmons’ bill would block any entity other than the state from putting bathroom protections into place, it specifically would not stop lawmakers and businesses from banning bathroom access to trans folks. Meaning, if SB 6 does not become law (which is seeming less and less likely as the House still hasn’t assigned it to a committee hearing since passing through the Senate), under HB 2899 another version of the bathroom bill could be proposed and passed during the 86th legislative session in 2019.

Unlike the hearing for SB 6 in early March, however, the State Affairs Committee decided to not vote immediately after testimonies were wrapped. That remains pending.