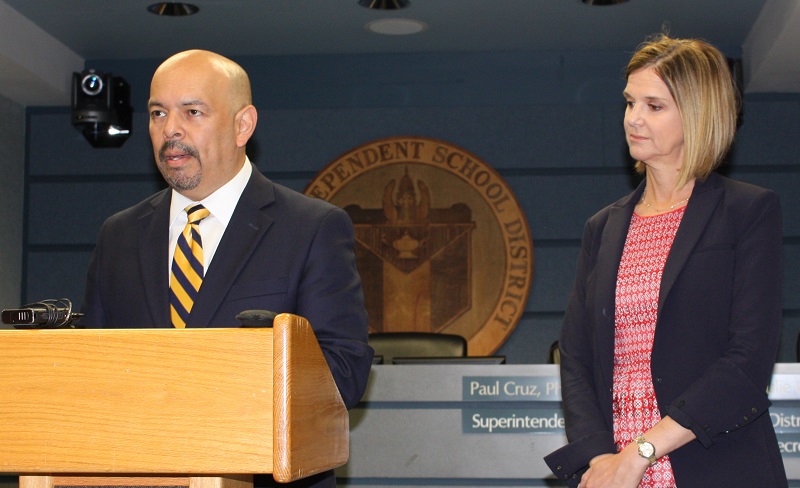 Departing Austin ISD board vice-president Paul Saldaña announces his exit from the board, alongside board president Kendall Pace (Photo by Richard Whittaker)

”After much consideration, it is with a heavy heart and mixed emotions that I formally announce my resignation as the board trustee for District 6.”

With those words, Austin Independent School District board vice-president Paul Saldaña confirmed this morning that he is resigning from the board two-and-a-half years into his first four-year term.

Saldaña‘s final day on the dais will be April 24, “which, coincidentally, will be my 100th board meeting,“ he said. “I’m happy to say I have perfect attendance.”

It was a tearful moment in the AISD board room. Flanked by board president Kendall Pace, Saldaña explained that his departure had nothing to do with policy, or a sudden and unexpected change in personal circumstances, but the continuing pressure of being a trustee. “I’ve sacrificed a lot of time and effort, losing quality time with my family – just like all of our other board members do – and I think I’m at a point where I’ve done and said everything that I had to. The last thing I want to do is spend the next 16 months complacent.”

Pace said she was “really sad” to see her vice-president leave that board, but that she respected his decision, and his contributions to the board. Before a farewell hug, she said, “You’re like a brother to me. We fought like siblings, but in the end a family always reconciled.”

Saldaña said that the decision to resign was not sudden, but rather something he’d been contemplating for a while, in no small part because the demands of the board were cutting into the time he could commit to his business. He said the board impacted his career “significantly,” and cited the 60-80 hours per week that trustees regularly work. The first term trustee said, “I talk about inherent and systemic problems and issues and challenges, and one of them is the fact that we’re all volunteers.”

While he did not advocate for making the post of trustee salaried – “Honestly,” he said, ”I can assure that all the people who serve on this board now, and those who have come before us, haven’t done it for financial reasons” – Saldaña did note that requiring the board to be financially independent wealthy discouraged candidates who come from poorer backgrounds from considering runs for seats. With 60% of all district students coming from economically disadvantaged households, he said, “Unfortunately there isn’t anybody, including myself, who properly represents [them]. That’s not democracy.”

Saldaña has been a fixture in Austin’s education politics and operations since well before he joined the board. After getting his feet wet as an aide to Mayor Gus Garcia, he went into political and business consultancy. He became a regular at board meetings, often representing groups like the Greater Austin Hispanic Chamber of Commerce and the Minority Contractors Trade Association Alliance. He moved to the other side of the dais in 2014, after announcing an unexpected challenge to incumbent Lori Moya. Moya stepped aside, but Saldaña still had to go through a run-off in a fiercely fought three-way election.

As the sole Hispanic member of the board, Saldaña has taken on the role of speaking for both Hispanic students and Hispanic community members, including clashing with Rep. Dawnna Dukes, D-Pflugerville, over how the district’s minority- and women-owned business program operated. In recent months, he had become more outspoken in his stance that the district’s actions on equity did not match its rhetoric. In fact, in what will probably be his last major vote before leaving the board, he was one of three nay votes on the updated Facility Master Plan, which he argued does not do enough to level the playing field between East Austin campuses and the rest of the district.

In his exit speech, Saldaña emphasized that there is now only one minority member on the board (District 1 Trustee Ted Gordon), and no Hispanic member, even though the majority of all AISD students are Hispanic or Latino. He encouraged the board to avoid an expensive special election, and instead do as they did when the late Robert Schneider died, and pick a suitable replacement to complete his unexpired term.