Progress and Justice With the San Antonio Four

Women hope to help the rest of the wrongfully convicted 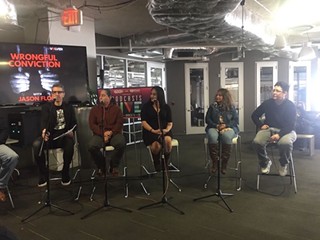 The San Antonio Four with Jason Flom, Tuesday at the Capital Factory (Photo by Sarah Marloff)

Nearly four months after the exoneration of a sexual assault conviction that sent the four women to prison for nearly two decades, the San Antonio Four (Elizabeth Ramirez, Anna Vasquez, Kristie Mayhugh, and Cassandra Rivera) were in Austin for an interview with Jason Flom and his podcast, Wrongful Conviction.

The founding board member of the Innocence Project met the four women and their attorney Mike Ware (of the Innocence Project of Texas) in the lobby of the Capital Factory. Flom, also a music executive in Manhattan, said that he hosts his Wrongful Conviction podcast in an effort to educate future jurors. “Everyone who listens [to our podcast] is going to serve on a jury at some point,” he explained to the Tuesday audience. “So if we can educate people on the causes of wrongful convictions they'll be less likely to happen.”

The Four were wrongfully convicted of gang raping Ramirez’s 7- and 9-year-old nieces in the summer of 1994. At the time, Ramirez, Vasquez, Mayhugh, and Rivera had each recently come out as lesbians. Two were pursuing college degrees. Both Rivera and Ramirez were young parents.

Ramirez, considered the ringleader of the untrue crime, was tried in 1997, convicted, and sentenced to 37 and a half years in prison. Her three friends were tried one year later, after declining a plea deal that would have kept them from serving any sentence. Vasquez told the audience: “We stood our ground. There was nothing to indicate we had done it. And justice did prevail, but it took a long time.”

All four of the women spent their time in prison frantically writing letters and seeking help from organizations around the country. Rivera, a mother to two children (ages 7 and 8) at the time of her arrest, identified the ACLU and Lambda Legal (a civil rights organization that represents LGBTQ communities) as two organizations who rejected their request. When an audience member asked what she thought her life would look like had she not been sent to prison, Rivera said through tears: “I would love to know how my kids would’ve grown up with me there.” She said she knows other people are currently dealing with the same circumstances. “That’s why we want to spend our lives fighting this.”

Though they offered no specifics, Vasquez did say that the four women “have some ideas in mind” regarding future entrepreneurial efforts. “This is still new for us,” she admitted. “We got the [exonerated] letter on November 23, 2016. We had to maintain jobs since our bail, but now I think some or all of us have some ideas.”

After the taping, Mayhugh told the Chronicle that each of the women are interested in continuing exoneration work. Vasquez has already agreed to work with the Innocence Project, she said, and in the last month alone the Four have traveled to several prisons, including Rikers Island in New York, to talk to inmates about wrongful convictions and ways they can seek help.

“I believe, if we keep beating in the door, we’ll turn this madness around. I feel really lucky to have found this.”

Film Flam
Law and order on the silver screen