Uber and Lyft splurge on lobby to deregulate themselves

If you don’t like the laws, buy some new ones. That’s not an option for most of us, but mega-corps Uber and Lyft have deep pockets and few scruples. If Austin officials and voters are not for sale, maybe state legislators will prove more agreeable. Uber spending on lobbying, 2017 (Courtesy of Texans for Public Justice)

That’s the message of the latest “Lobby Watch” from Texans for Public Justice, which reports that the two major “rideshare” companies (motto: "You share, we collect") have spent up to $5.5 million lobbying since 2014. That’s on top of the more than $10 million (mostly Uber’s) they spent last spring to impose and then lose an Austin deregulation referendum. In the wake of that humiliating defeat, they decamped the city and lay siege to the Capitol.

According to TPJ’s calculations, “Uber has increased its state lobby spending 23 percent over last year. It now is spending up to $1.6 million on 26 lobbyists. Lyft meanwhile boosted its lobby spending 88 percent, to pay 14 lobbyists up to $760,000. Together, the two San Francisco-based companies are [currently] spending up to $2.3 million to preempt the powers of local Texas governments.”

Drawing from recent ethics disclosure filings, TPJ estimates Uber’s most recent spending (early 2017) somewhere between $835,000 to $1.5 million, to more than two dozen lobbyists. Lyft’s comparable numbers, to a brace of 14 lobbyists, reflect filings between $365,000 and $760,000. (Filings provide only the range of payments.) There’s another $40,500 in contributions to various legislative caucuses, including minority caucuses and both state political parties. 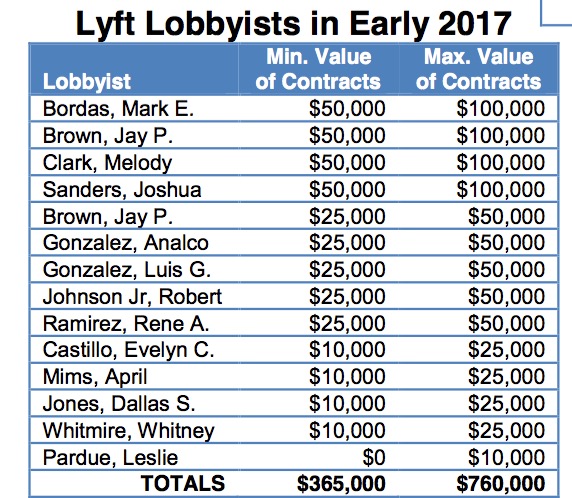 Lyft spending on lobbyists, 2017 (Courtesy of Texans for Public Justice)

In all, since 2014, TPJ estimates that the two companies have assigned 125 legislative lobbying contracts for which they’ve paid in excess of $5 million.

What will they get for their money? This week, House and Senate committees will be considering several bills that would prevent Austin and other Texas cities from regulating transportation network companies, move all such regulatory authority to the state, and specifically remove public safety regulations like fingerprint-based background checks, consistent vehicle markings, protections for disabled riders, rules against surge pricing during emergencies, and other commonplace taxi-service rules that the companies consider too onerous (although they often abide by similar rules where required, as in New York City). As drafted, the bills also ignore the fact that traditional taxi companies (competitors to ride-hailing firms) generally have to abide by stronger regulations).

Mayor Steve Adler defended Austin’s regulations and last year’s vote against the proposed bills: “Austin voters chose a system which fostered ride hailing competition and innovation and which delivered the safety choices they wanted. It’s working well and the people’s will should be respected.”

Council Member Ann Kitchen, personally targeted last year by the TNC campaign because she chaired Council’s Mobility Committee that drafted the city regs, said: “City and state legislators have a responsibility to protect the public. With ground transportation – like TNCs, taxis, limos, and other rides-for-hire – that means ensuring public safety by ensuring that the vehicle is safe, the driver is safe, the consumer is safe, and the traffic rules are followed.”

Council Member Delia Garza added, “The City of Austin struck the right balance between keeping riders safe and allowing the industry to operate, because riders are safer and the industry is still very robust.”

“Public safety and the success of TNCs are not mutually exclusive,” said Kitchen. “Austin has demonstrated how citizens can exercise their rights to choose public safety, and that the market will meet the challenge and provide the services.”

On the other hand, Uber and Lyft appear willing to demonstrate to local voters that public safety, like democracy, is determined by the highest bidder. 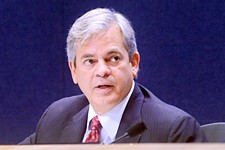