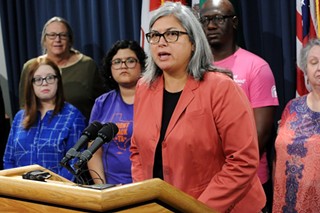 Fed up with the slew of bills regulating women’s health care, Rep. Jessica Farrar, D-Houston, has put forth a bill on the final day of legislative filing that would penalize men for “unregulated masturbatory emissions.”

That’s right. Under Farrar’s HB 4260, any man who beats off outside of the care of medical professionals (or otherwise ejaculates outside of a woman’s vagina) would face a $100 penalty for each emission and the private deed would be “considered an act against an unborn child, and failing to preserve the sanctity of life.”

While the bill is being characterized as satirical, the regulations inherent in the multipart legislation parallel many of the same onerous and intrusive rules imposed on women. “My bill may seem absurd, but what’s more absurd is what Texas women are already experiencing when trying to access what should be safe and legal health care,” Farrar told the Chronicle. “Sometimes humor can help people see things that they might not being paying attention to. You might be laughing at this, but again, this is something Texas women face every day when accessing their health.”

For instance, should the bill go into effect, before seeking a vasectomy, Viagra prescription, or a colonoscopy, men would need to undergo a digital rectal exam and MRI. The procedures could only be performed 24 hours after an initial consultation, similar to the state law requiring that abortion-seeking women undergo an invasive, transvaginal sonogram and wait 24 hours before their abortion procedure.

Under HB 4260, men would be given “A Man’s Right to Know,” a booklet that would contain medical information about the “benefits and concerns” of the three aforementioned procedures. The proposed pamphlet is similar to the error-riddled “A Woman’s Right to Know” booklet the state mandates must be given to women before their abortion. Criticized as anti-choice propaganda, the booklet graphically depicts fetuses at different stages of gestation. And the Department of State Health Services must maintain a registry of private nonprofit organizations to provide “fully-abstinent encouragement counseling, supervising physicians for masturbatory emissions, and storage for the semen.” Hospitals or contributing private nonprofits would pick up the costs, according to the bill. Today, the health department offers abortion-seeking women a list of non-medical, religious nonprofits called crisis pregnancy centers, which deter against abortion and in some instances, offer abstinence-only education.

“I want people to understand women are facing medically unnecessary procedures that are meant to mess with their heads instead of helping them to come to a comfortable place,” said Farrar. “There is a way to reduce abortion that doesn’t involve coercion and invasive procedures.”

Farrar’s bill also aims to ensure a doctor has the right to “invoke their personal, moralistic, or religious beliefs” in refusing to perform a vasectomy or a colonoscopy, or write a Viagra prescription, mimicking the proposed Senate Bill 25, which allows doctors to withhold medical information about fetal abnormalities (without the threat of a malpractice suit) if they believe a woman will consider an abortion.

And not to fret, masturbatory emissions created in health or medical facilities will be “stored for the purposes of conception for a current or future wife,” the bill reads. The fines incurred by rogue semen, on the other hand, will go toward aiding children in Department of Family Protective Services (CPS) care, in order to protect “the sanctity of life” – an oft-used defense of cruel, anti-choice bills by mostly white, male, conservative legislators.

A woman’s health champion and outspoken advocate of reproductive rights who also chairs the Texas House Women’s Health Caucus, Farrar has offered and supported several pieces of women’s health legislation over the years. This session, she’s introduced measures to fix medical misinformation in the “A Woman’s Right to Know” booklet (HB 746) and is fighting to repeal the 24-hour pre-abortion sonogram waiting period (HB 745).

“Frankly, I’m sick and tired of being sick and tired,” said Farrar, pointing to the misplaced priorities of the Texas Legislature when it comes to women's health. For instance, she noted, lawmakers have placed heavy focus on anti-choice bills like HB 35, a rule forcing women to bury or cremate their fetal remains following an abortion or miscarriage, instead of directing legislative efforts to fix the alarmingly high state maternal mortality rate.

“Bills filed this session continue to treat women as incubators rather than looking at ways to provide good health care and ensure healthy pregnancies,” said Farrar. “Instead, we get legislation that looks at how to get out of a Republican primary successfully.”