Despite 21 hours of testimony, SB 6 goes to chamber floor

Rose, a transgender kindergartener, told a story Tuesday night about the problems with Senate Bill 6.

“I was using the boys’ restroom, and a boy hopped over the stall and just looked at me,” the child told members of the state’s Senate Affairs Committee a few minutes before 9pm. 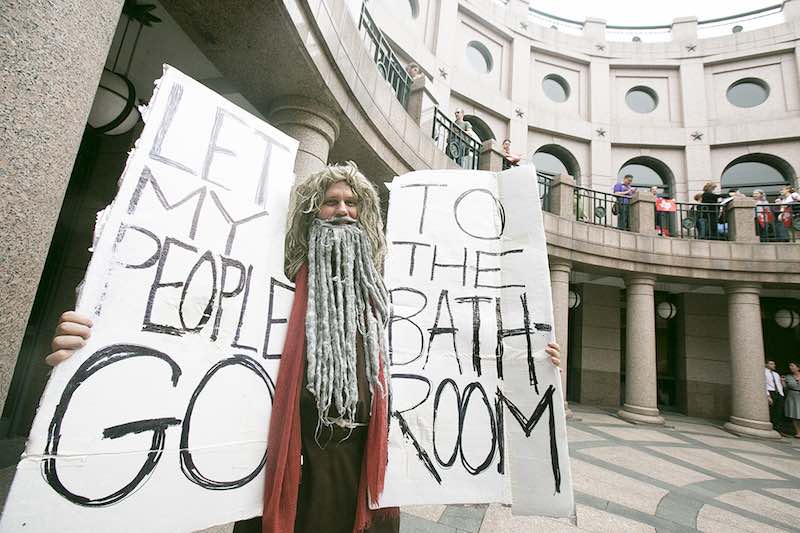 "Moses" makes an appearance at the Capitol for SB 6. (Photos by Jana Birchum)

“I thought I’d at least have privacy in there, but they shouldn’t have been there. It didn’t feel right.”

Rose was one of two dozen trans children and teenagers who had signed up to testify at the Texas State Capitol yesterday against Brenham Sen. Lois Kolkhorst’s Texas Privacy Act – better known as the bathroom bill – the crown jewel this session of the Senate’s most theatrical bigot, Lt. Gov. Dan Patrick. 430 speakers signed up to speak during public testimony (though some left before testifying). They each would have two minutes to speak – more than 14 hours in total. Lines began to form well before the hearing, which began at 8am. Testimony was still ongoing when we left at 4am.

Morning proceedings brought invited witnesses before the committee. For three hours, cisgender people – many of whom do not live in Texas – spoke in favor of the bill, which would force transgender, non-binary, and gender nonconforming folks to use the bathroom that aligns with the gender on their birth certificate as opposed to their gender identity, but under the guise of keeping predatory men out of women’s restrooms. Some insisted they didn't support SB 6 because it discriminated against transgender people, but rather because they believed it would protect women and children's privacy. Others slipped casual hate speech into their statements, as did a pastor from San Antonio who denounced trans people and mentioned having “former gays and lesbians” in his congregation. Tony Perkins, president of the Family Research Council, a conservative think tank the Southern Poverty Law Center has labeled an anti-LGBTQ hate group, was among the invited speakers, as was North Carolina's Lt. Gov. Dan Forest, who pushed HB 2, the bathroom bill that clearly inspired Texas’ iteration, and passed in the Tar Heel State last March. Texans line up to testify on SB 6.

The first part of the hearing demonstrated – at best – that SB 6 allows ignorant people to stay ignorant. Even Kolkhorst, who said she spoke with transgender people during her drafting of the bill, continuously referred to trans people as “transgenders,” even after one invited witness – a transgender doctor who works exclusively with trans patients – instructed the committee that using “transgenders” or “transgendered” is “extremely disrespectful.” Sen. Eddie Lucio Jr., D-Brownsville, had a tough time grasping pronouns. The elder Lucio, who’s broken with his son by supporting SB 6, misgendered one woman as she wrapped her testimony.

Opponents repeatedly noted an array of potential issues. Multiple people stressed how “SB 6 solves a problem that was never there to begin with.” Others pointed out that while Kolkhorst’s bill allows the use of updated birth certificates (a process the Republican senator helped pass in 2005), it remains difficult and expensive to update such a document in Texas. For those born out of state or natives who are still children, such a task can prove impossible, as Rose’s mother confirmed during her testimony. Zaoey Liddell, a Witchita Falls resident born in Louisiana, outlined for the Chronicle what it would cost her to change her birth certificate. On top of paying for doctor appointments, blood work, several months of hormone treatment – a total of $174 monthly, and the cost to see a Texas judge, Liddell would have to hire a lawyer to take her case before a Louisiana court to change her birth certificate at an additional cost of $15,000-50,000. Kolkhorst and Patrick have both been adamant, since the bill’s filling, that the Texas Privacy Act was created to protect the privacy of women and children. But ironically, SB 6 is one of few pieces of conservative legislation filed that expresses any interest in supporting women's rights, women's safety, and women's health. A litany of anti-abortion bills are currently moving through the Legislature. Very little has been done by Republicans to prevent sexual assault outside of public bathrooms, or to ensure the prosecution of rapists.

This was not lost on SB 6 opponents. As one witness stated, if Texas senators "wish to protect women, they need to target cisgender men and stop them from raping women.”

Several cisgender parents spoke in support of their young trans or gender nonconforming children. Some cried. Each of them told state senators that sending their transgender child to the bathroom aligning with their birth certificate would put their child at risk. Despite supporters' earlier statements about the need to shelter cisgender children from transgender bathroom issues, these parents ventured that SB 6 would in fact cause more harm to trans kids who are already 40% more likely to attempt suicide.

Yet two Texas school superintendents voiced annoyance with the opposition, and the Obama Administration’s May ordinance, which offered school guidelines to better support trans students (which the Trump Administration just dissolved). In statements of support for SB 6, they both said that the school system isn’t broken, and has worked effectively for years. Both statements proved tone-deaf to other speakers, who had clearly outlined how the system does not work for trans kids.

Testifiers also mentioned often how, despite all conservative lawmakers’ preaching about a desire to protect children, SB 6 in fact condones the bullying of trans youth (and adults). The bill encourages citizen policing – “potty patrol,” as one witness called it. Multiple members of the trans community told the committee they believe their rights will be violated. Becca, a graduate student from Galveston, said through tears that SB 6 serves as a constant reminder: “I'm not safe, I'm not good enough, and I don't belong.”

“This bill isn't about transgender people,” offered another witness. “It only harms us. Today has been one of the hardest days I've ever had to sit through, and I've never heard so much hate in my life.”

A few minutes before 5am on Wednesday, nearly 21 hours after the hearing began and just moments after witness testimony concluded, committee members voted 8 to 1 (with Charles Schwertner supporting in absentia) to send SB 6 to the full Senate, where it will now await a hearing date. Senators have “blood on your hands,” in the words of one testifier, who spoke after midnight. “Hope you can live with it.”