Judge Blocks Texas From Kicking Planned Parenthood Out of Medicaid

State determined to have provided "no evidence" of wrongdoing 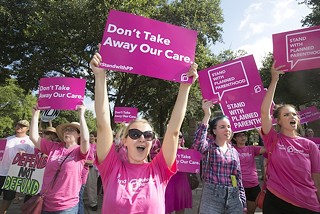 Austin-based U.S. Federal District Judge Sam Sparks blocked Texas health officials from kicking Planned Parenthood out of Medicaid on Tuesday, writing that the action would stand against federal law and cause irreparable injury to the 12,000 low-income Texas women who visit the reproductive health provider.

One term is noticeably prevalent in Sparks' 42-page ruling against the state: “no evidence.” The judge spent much of his preliminary injunction order noting that the state's health commission failed to provide any substantial evidence that Planned Parenthood engaged in wrongdoing before ousting the providers from Medicaid.

Basing its claim wholly on discredited undercover anti-choice videos produced by the radical Center for Medical Progress, the Office of the Inspector General at the Health & Human Services Commission alleged that Planned Parenthood Gulf Coast had “a history of altering" and "a willingness” to alter abortion procedures for research purposes. While the state only claimed program violations at the center in Houston, officials have threatened to pull Medicaid money from all 30 clinics statewide. Health officials first moved to boot the provider from federal-state insurance safety net in 2015, but it took a year for them to issue a final notice of termination.

During a three-day hearing in January, attorneys for the state attempted to highlight that supposed wrongdoing by showing snippets of an eight-hour video of a conversation by the fictional biomedical employees and PP Gulf Coast employee Melissa Farrell, which Sparks clearly wasn’t having.

“After reviewing the CMP Video in its entirety and considering the Inspector General's testimony, the Court finds there is no evidence in the record PPGC violated any medical or ethical standard,” he wrote. Sparks also found no evidence that PPGC ever made a profit from procuring fetal tissue for research: “Specifically, the Inspector General could not point to a single payment PPGC ever received that exceeded its expenses incurred.”

Sparks admonished the secretly recorded videos as “suspect” and criticized the state for failing to take steps to authenticate the footage. “Even when viewing these conversations in the light most favorable to the Inspector General, the Court sees nothing more than confused and ambiguous dialogue, open to interpretation,” he wrote. The videos and the controversy surrounding them, he said, are more akin to a “best-selling novel rather than” a Medicaid case. “Yet, rather than a villain plotting to take over the world, the subject of this case is the State of Texas's efforts to expel a group of health care providers from a social health care program for families and individuals with limited resources.”

Sparks also slammed the state for relying on witnesses with no expertise in women’s health, like Dr. Ted Spears, HHSC OIG’s chief medical officer and an orthopedic surgeon, to make their case. And, contrary to what the state’s health commission insists, his court stands unconvinced with that displaced Planned Parenthood patients could “quickly and easily” find new providers, causing “irreparable injury” to vulnerable women.

Sparks concluded the state’s intent must be something other than Planned Parenthood’s quality of care: The “evidence currently in the record implies HHSC was motivated by reasons other than qualifications to terminate the Provider Plaintiffs from Medicaid.” (We can all place a safe wager on what that motivation may be.)

Attorney General Ken Paxton vowed to appeal the ruling shortly after it was released, writing in a statement that the decision to allow a health care provider to continue to offer preventative services for the state’s poorest women “flies in the face of basic human decency.” Meanwhile, reproductive health advocates are celebrating the order as a victory.

“We went to court to protect our patients and to state clearly and simply that Texans, not politicians, should decide where to receive their health care,” said Ken Lambrecht, president & CEO of Planned Parenthood of Greater Texas – which includes Austin clinics – in a statement following the ruling. “Today, Texans received good news. This ruling ensures that Medicaid patients can continue to receive birth control, cancer screenings, HIV tests, STD treatment and other essential healthcare services at Planned Parenthood’s health centers throughout Texas.”

In January, Sparks also blocked a state rule that would force women to bury or cremate their fetal remains after an abortion or miscarriage. He criticized the state for proposing a regulation that may amount to a "pretext for restricting abortion access."