Federal immigration agency rumored to be in town for roundup

UPDATE (Feb. 10): Reports are coming in that ICE raids are taking place around Austin. Immigrant Services Network of Austin is directing those affected to resources and fact sheets from United We Dream and the National Immigration Law Center, as well as a deportation crisis hotline (512-270-1515).

Immigration attorneys and activists around the city expressed concerns today (Feb. 2) about the potential of an “active” U.S. Immigration and Customs Enforcement (ICE) operation in Travis County.

The threat of increased enforcement follows an immigration ban executive order issued last Friday by President Donald Trump and growing tensions over discordant “sanctuary city” policies between Travis County Sheriff Sally Hernandez and Texas Gov. Greg Abbott. Hernandez pledged to not comply with noncriminal ICE requests, with some exceptions, a policy that went into effect on Wednesday, Feb. 1. In a vindictive display of political payback, Abbott cut off funding of a $1.5 million criminal justice grant to Travis County. Immigrants and allies demonstrate outside of the Capitol Thursday during a Senate State Affairs Committee hearing on SB 4, a bill that would require local law enforcement to comply with ICE. (Photo by Jana Birchum)

According to the Immigrant Services Network of Austin, which published a news bulletin on Wednesday about the rumored raid, ICE has reportedly deployed four teams of five to 10 officers in Travis County. The federal agency is allegedly lodging detainers for any foreign-born individual in a county jail, and are detaining and arresting people who have criminal warrants or outstanding orders of removal. (DACA, deferred action, pending U visas, and stays of removal aren’t being targeted at this point, though that could change.) “Be careful,” warned the local network.

Professor Denise Gilman, director of the University of Texas Law School’s Immigration Clinic, said that ICE’s efforts this weekend are likely not a coincidence. Tensions are high after the standoff between Hernandez and Abbott. On Thursday, the Texas Senate State Affairs Committee convened for a well-attended hearing on Senate Bill 4, a bill from Sen. Charles Perry, R-Lubbock, that would ban so-called “sanctuary cities” and punish municipalities and universities that do not comply with detainer requests from ICE to hand over immigrants in custody for deportation.

“We are concerned about the likelihood this will spread a lot of fear in our communities,” said Gilman. “It’s unfortunate that it seems to be timed to intimidate members of the community into thinking twice about the smart policy decision that Sheriff Hernandez made to allow strong relations between local law enforcement and the community, instead of having them get involved with ICE orders.”

Pressed to confirm reports of ICE activity, Carl Rusnok, the agency’s central region director of communications, told the Chronicle that he could not “research vague accusations” and asked for “specific examples – dates, times, locations, description of the event” before researching to confirm if enforcement had increased in Travis County. So far, the Chronicle has not received notice of any specific detainments or arrests. 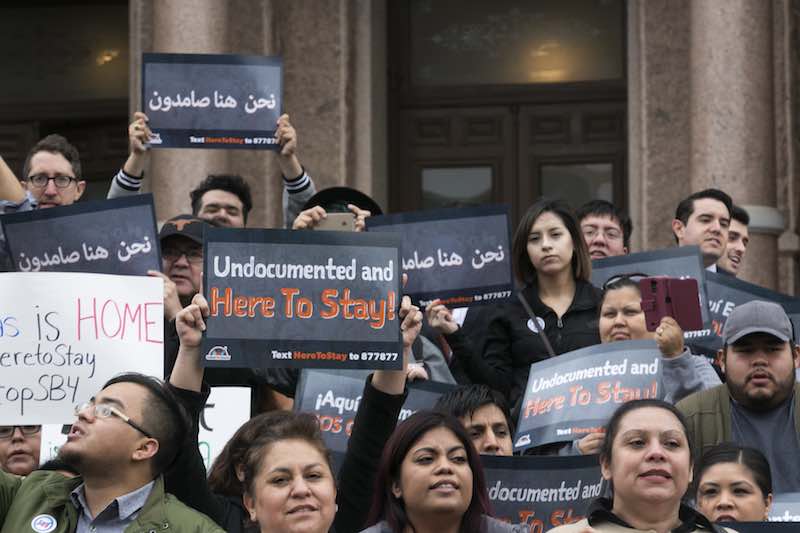 ISN Austin is moving forward with the expectation of ICE’s presence, and has directed those affected to resources and fact sheets from United We Dream and the National Immigration Law Center, as well as a deportation crisis hotline (512-270-1515). The fact sheets remind those concerned about immigration enforcement to not open your doors (ICE cannot enter without a signed warrant from a criminal court judge) or sign anything ICE gives you without talking to an attorney first.

District 4 Council Member Greg Casar said his office is is preparing to issue “Know Your Rights” pamphlets to area schools to help inform students and parents about how to respond to ICE enforcement. “Regardless of whether or not the raids are occurring this week, we believe such assaults on our community are imminent given the anti-immigrant hate of our federal administration,” said Casar in a statement to the Chronicle. “Trump and his allies will do everything they can to divide Americans, invoke fear in vulnerable neighborhoods, and demonize an entire community of people. For this reason, we are sharing know-your-rights materials with our constituents in District 4.”

Sam Robles with Workers Defense Project says her group is similarly focused on ensuring immigrant families and allies have the resources they need to protect themselves. WDP is holding “Know Your Rights” education and training sessions every Sunday from 4-6pm at 5604 Manor Road.

If you have any information or have been impacted by immigration raids, contact news@austinchronicle.com.