TCSO on new "policy on cooperation" with federal immigration agency 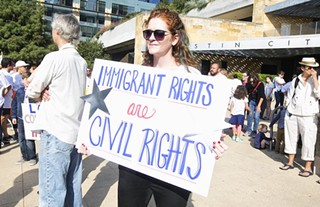 Travis County Sheriff Sally Hernandez published her long-awaited policy concerning how her office will work with U.S. Immigration & Customs Enforcement (ICE) on Friday. The sheriff plans to maintain communication with the federal agency, but will not comply with many – or any, at all – of its most rote detainer requests.

Hernandez’s edict, available on video via TCSO’s website, as well as in written form, now means that county law enforcement will only comply with ICE detainer requests if the request is accompanied by a judicial warrant or court order for continued detention, or if it involves an individual who has been charged with murder, capital murder, aggravated assault, or the smuggling of persons. Absent a warrant or court order, TCSO officials won’t be allowed to conduct civil immigration status investigations at the jail or at TCSO offices. Deputies are now barred from providing any information about an inmate’s release or address to ICE.

“Everybody arrested in Travis County will be treated the same under the law, as our Constitution requires,” said Hernandez in the nine-minute video. “If federal immigration officials believe they have enough evidence to prove that a person is illegally in the country, or that they should be held in my jail beyond the release date, they can go to a federal judge to issue a warrant to detain that person, as it’s generally required by law."

Hernandez’s policy on ICE is a drastic departure from that of her predecessor, Greg Hamilton, a staunch defender of ICE and the Secure Communities (S-Comm) program, which grants local law enforcement agencies 48 hours to detain an immigrant while their fingerprints and other vitals get sent to the FBI and ICE for review. In her video statement, Hernandez chided Hamilton’s policy without naming names, calling it a “system [that] does not foster public safety.

“Public safety is fostered whenever there is accountability and closure,” she continued. The shift aligns TCSO with the ideals of the Austin Police Department, whose most recent permanent chief, Art Acevedo, was an outspoken opponent of working with ICE, and whose current interim chief, Brian Manley, has stated publicly that he agrees local enforcement shouldn’t get tangled with ICE.

Hernandez’s policy is set to go into effect on Feb. 1. 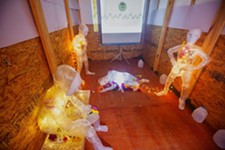