Your Guide to the Weekend Resistance

A breakdown of inauguration weekend counterprotests

Austin is preparing for an epic counterresponse to Friday’s inauguration of Donald Trump as president. It’s a long-haul weekend of protests, rallies, and marches calling for resistance against politics of fear and hate, and solidarity with the multiple communities the incoming administration has promised to target.

Because the multiple marches and groups and event pages have reached the pinnacle of confusing, we’ve made a quick and easy guide to the weekend’s events. So pick your destinations, lace up some sensible footwear, and keep the momentum high.

Friday, 12:15pm: UT Student Walkout
University of Texas students, faculty, and staff are encouraged to cut class and head for the tower to kick off Friday’s events. The walkout, organized by J20 Organizing Committee – a collection of students and staff who’ve come together to build “resistance to increasingly dangerous right wing extremism, neoliberal economic policies, wars without end, and all forms of racist, bigoted, xenophobic, sexist, homophobic, and transphobic rhetoric, movements, and policies on our campus, in our city, and across the U.S.” – will eventually march down Congress Avenue to unite with the One Resistance March by 4pm.

Friday, 5pm: One Resistance Rally and March
Organized by a coalition of 40+ Austin-area community groups and nonprofits, the One Resistance March is expected to be the biggest event of the day, with likely more than 3,200 protesters in attendance. Once convened at Auditorium Shores, the march will proceed north on Congress Avenue to the State Capitol and back to Auditorium Shores, where a rally will take place from approximately 6:30 to 7:30pm.

Friday, 7pm: LGBTQ Human Rights Rally
After the original LGBTQ inauguration protest fell through, several local members of the queer community came together to plan a two-hour rally specifically dedicated to the fighting of anti-gay and anti-trans legislation. The rally will take place on the south steps of the state Capitol and include speakers and performers until 9pm.

“There are over 20 pieces of anti-LGBTQ legislation that have been proposed this session,” wrote one of the organizers on Facebook in response to why they haven’t joined with One Resistance. “While we fervently support ALL groups, we feel that the LGBTQ community deserves to have its own, specific event.”

Friday, 9pm: LGBTQ Rally and One Resistance Afterparty
Head to Mohawk for the official afterparty to let off some steam. Performances include Lexi Cardenas, spoken word with Lady Bird, and Thelonious Love. Proceeds will be donated to Waterloo Counseling Center. 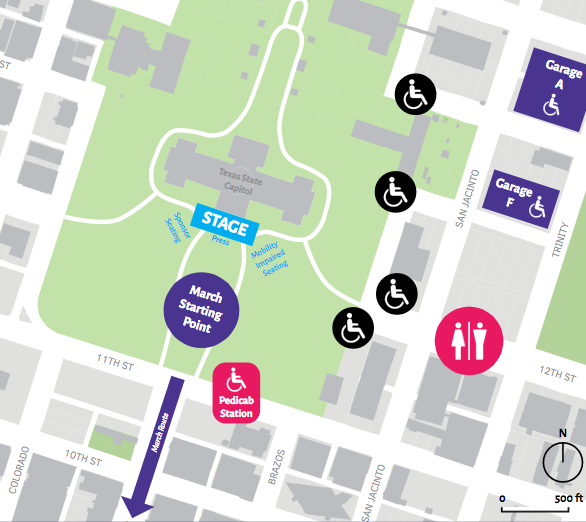 Saturday, noon: Women’s March on Austin
Expected to be one of the largest sister-marches to the national Women’s March on Washington, Saturday’s three-and-a-half-hour event currently has more than 26,000 online RSVPs. Though the march begins at noon, protesters can arrive at the Capitol between 11am and 11:45am. The march will move down Congress to Sixth Street, toward Lavaca Street, and back to the Capitol where the rally will begin at 1:30pm. Speakers include former Sen. Wendy Davis, Rep. Senfronia Thompson (D-Houston), and motivational speaker Lizzie Velasquez. Local musicians Gina Chavez and Tameca Jones will perform; additional speakers are expected.

Protesters are coming by busloads from all over the state to protest against the incoming administration’s rhetoric attacking women, immigrants, Muslims, LGBTQIA communities, Native people, people of color, people with disabilities, the economically impoverished, and survivors of sexual assault.

For additional times, locations, and events – including Sunday’s celebration rally of Roe v. Wade’s 44th anniversary – see our Upcoming Rallies page. If you're craving a more artistic protest, we suggest you take a look at our Arts Editor's events guide to catch local artists and comics speaking out against Trump. Otherwise, we’ll see you in the streets.