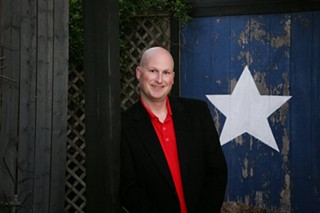 With complete disregard to women’s constitutionally protected right to an abortion, Rep. Tony Tinderholt, R-Arlington, filed a bill this week that would outright criminalize abortion at any stage.

Forgoing the usual pretense of clinic regulation and protecting women’s health and safety, Tinderholt’s “Abolition of Abortion Act” makes clear the far right-wing legislator seeks to turn the medical procedure into an illegal action by granting embryos the same rights as humans. HB 948 prohibits abortion and recognizes “the rights, powers, and privileges of all unborn children at every stage of gestation from fertilization until birth.” It would punish women and doctors by removing the immunity protection for abortion procedures in the Texas Penal Code’s rules for criminal homicide. While the law would not apply if a mother’s life is at risk due to pregnancy complications, there are no exceptions for rape or fetal abnormality, Tinderholt’s office tells the Chronicle. The state would enforce the abortion ban “regardless of any contrary or conflicting federal statutes, regulations, executive orders, or court decisions” – meaning the state could somehow ignore precedent in Roe v. Wade.

Luke Macias of the Tinderholt camp tells the Chronicle the goal of the legislation is to “make sure the law affords the same protections to the most vulnerable in society – the unborn.” The office is well aware their bill completely flies in the face of longstanding health law, but that’s never stopped anti-choice legislators from filing unconstitutional bills before. “If this becomes law it could absolutely be challenged by the Supreme Court and that would be a challenge we would go forth with,” said Macias. “Rep. Tinderholt would tell you Texans can decide, and the Legislature can decide if every human should be protected. We shouldn’t have to ask permission from any court system along the way.”

NARAL Pro-Choice Texas considers the bill the most drastic abortion bill filed thus far. The only comparable legislation has been SB 186, filed by Lt. Gov. Dan Patrick (when he was a state senator) in 2007 during the 80th legislative session. Tinderholt's bill goes even further by changing the Penal Code and placing criminal penalties on women who have abortions.

“This cruel bill is the most extreme measure we’ve seen at the Texas Legislature,” said Heather Busby, executive director of NARAL Pro-Choice Texas. “It takes away a pregnant person’s legal rights and could open up to investigation and prosecution of anyone who has a miscarriage or who seeks an abortion. When politicians criminalize safe medical procedures, they put patients’ health and safety at risk. HB 948 strips away our constitutional right to abortion."

More than a dozen other anti-choice bills have been filed so far this session, including measures to ban insurance coverage for abortion and force women with fetal abnormalities to carry pregnancies to term after 20 weeks.

After Years Sheltered From ICE by Local Churches, Immigrants Get Reprieve
Trio of refugees granted stays of removal for the next year