Anti-choice rule will not go into effect until Jan. 27 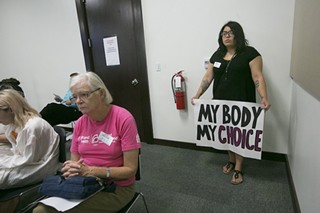 During the second day of hearings to challenge a state health department rule that would force women to bury or cremate their fetal and embryonic remains after an abortion, miscarriage, or ectopic pregnancy (regardless of gestation period), the court heard from state witnesses, who often failed to ensure their ability and capacity to handle the new rule.

The first day in court (held Tuesday) featured mostly plaintiff witnesses, who expressed the difficulties of taking on more abortion-restrictive rules. On Wednesday (Jan. 4) the court heard from the plaintiff’s final witness, Dr. Karen Swenson of Women Partners in Health. The Austin OB-GYN of 31 years told the court she left her post at Seton Hospital because patients were “distressed” by a consent form that directed their fetal tissue post-miscarriage to be buried in a Catholic cemetery. The similar state rule would cause an equivalent negative emotional reaction and doesn’t respect women’s autonomy, said Swenson. When pressed by the state on whether or not burials are less safe than the current method of sanitary disposal, Swenson repeated that the revised rules carry with them the potential for mistakes as they “deviate from the already established standard of care.”

State witness Jeffrey Bishop, a philosophy professor at St. Louis University and former doctor, took the stand to reaffirm the state’s claim that the revised rule promotes “dignity,” by waxing philosophical with no concrete data, to which an unimpressed Sparks responded by turning around in his chair. “The state has the responsibility to uphold the dignity of human beings,” said Bishop. The witness probably didn’t help the state’s case much either when he admitted that he hadn’t examined the regulation in detail because it was “very complicated” to read, or that he didn’t take the time to peruse the original rule for comparison’s sake. Later, at the conclusion of the hearing, Sparks vocalized his visible discontent of Bishop, saying the witness has “no credibility whatsoever” with the judge. Sparks admonished Bishop for not having a “substantive” knowledge of the rule.

During cross examination, Center for Reproductive Rights attorneys revealed Bishop, while sitting on the editorial board of Christian Bioethics journal, wrote that an ideal world is one in which abortion is not “conceivable.” Bishop clarified that he hoped society could create a supportive climate in which no woman would choose abortion. Lawyers also noted Bishop had written that he promoted a Christian system of medicine, akin to the services provided at Catholic hospitals.

Next to speak, Jennifer Allmon, executive director of the Texas Catholic Conference of Bishops, answered questions about the religious group’s offer to pick up the tab for fetal – or as she worded it, “children” – burials. Allmon said the arrangement is still being worked out and didn’t have specifics on how the organization could generate the capacity or volume to handle tissue from the thousands of abortions and miscarriages that take place in Texas annually. In fact, Allmon could not report how many burials the organization conducts a year. (Currently, the group only contracts with mostly Catholic hospitals.) Allmon did inform, however, that to date, roughly 15 Catholic cemeteries could potentially be part of the service, however permitting and licensing to handle fetal tissue had yet to be addressed. Comparing the situation to a neglectful parent’s child being taken away by CPS, Allmon said women who choose to abort in turn forfeit their right to make the decision about what happens to their fetal tissue and that should then fall to the state.

Final state witness Jay Carnes, owner of three Texas funeral homes and a crematorium, told the court he is in talks with eight medical hospitals about contracting his services with them if the rule goes into effect. However, Carnes said he’s only handled “some” fetal tissue cases, making his capacity to handle the thousands of tissue in Texas questionable. While Carnes is licensed to handle human remains by the state Funeral Commission, fetal tissue is classified as medical waste and its transport regulated by the Texas Commission on Environmental Quality. When asked by plaintiff attorneys whether or not he holds a TCEQ permit, Carnes repeatedly insisted he could “not recall.”

Sparks decided to again halt the rule until Jan. 27, the week he plans to make a final decision. While we won’t know the fate of the rule until later this month, Sparks did give a strong indication that he stands critical of the state’s ideological intentions. Sparks appeared frustrated by state attorneys during closing arguments, saying there is “no question” the rule doesn’t advance public health. Sparks told attorneys there was no evidence in the record showing the regulation is anything other than "100 percent political" especially given the fact it was published just a few days following the U.S. Supreme Court’s reversal of HB 2.

“Even you admitted there’s no health benefit and no problem here to be fixed. It’s for the dignity of the fetus,” said Sparks to state attorneys.