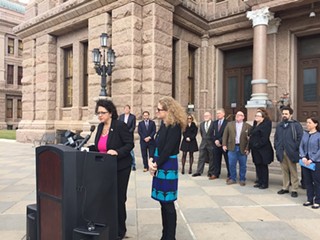 It’s hard to imagine Republican legislators diverging with the Texas Association of Business, a powerful conservative lobby group, but when it comes to discriminatory bills, the state’s chamber of commerce is strongly cautioning against passing any legislation that would hurt LGBTQ Texans.

During a press conference at the Capitol on Tuesday, Dec. 6, the unlikely allies unveiled a study showing the state could be in jeopardy of losing at least $8.5 billion in GDP and 185,000 jobs if they passed bills that discriminate against gay and transgender residents. The study, conducted by St. Edward’s University, also found anti-LGBTQ bills would drastically impact Texas’ convention and tourism industry, which infuses $69 billion into the economy. Over four years, Austin stands to lose $38 million from SXSW festival and $108 million at the Formula 1 race track, TAB projects. “Discriminatory legislation is bad for business,” said Chris Wallace, TAB president. “Our economic study points to the dire and far-reaching impact of discriminatory legislation on Texas businesses, our communities, families, jobs and the larger state economy.” Wallace said the group is building a coalition of businesses including Apple, IBM, and Intel, to make sure legislators understand the economic threat.

Duff Stewart of Austin-based ad firm GSD&M; Hugh Forrest, director of SXSW Interactive Festival; and Caroline Joiner of TechNet stood alongside TAB members to highlight how impending anti-LGBTQ bills would impede recruitment, inclusion, retaining talented employees, and maintaining competition at their companies. “Creativity is part of the identity of Austin and we rely on a diverse pool of talent to maintain that creativity. Should Texas be perceived as a hostile work environment it would hinder our ability to attract and retain the kind of talent that make up our unique city,” said Stewart.

Next year’s legislative session is guaranteed to feature a heated battle over LGBTQ rights, and only time will tell if the strictly economic argument – including the fact that Texas businesses make up 60% of the tax base – will sway the minds of conservative legislators. Making it one of his Top 10 priorities, Lt. Gov. Dan Patrick has promised to introduce a North Carolina-style ‘bathroom bill’ that would ban transgender residents from using the restroom that aligns with their gender identity. And anti-LGBTQ bills, like Sen. Bob Hall’s SB 92, have already started trickling in. On the House side, moderate Republican Rep. Joe Straus has publicly downgraded the transgender restroom issue as just not that important. “This isn’t the most urgent concern of mine,” said Straus last month. “If it creates a situation like North Carolina went through, my enthusiasm would not be high for that.” North Carolina has lost out on $630 million and several sporting and entertainment opportunities since March, not to mention millions in lost wages. Texas businesses, including dozens from Austin, recently wrote an open letter to the Lege strongly warning them to lay off passing similar bills, the Chronicle previously reported.

Joining TAB, Austin Reps. Donna Howard and Celia Israel, also vowed to fight against discriminatory legislation when session begins and redirect focus to basics like education, healthcare, and infrastructure come January. “In all my years of activism and public service, I’ve never seen the business community step up like this,” said Israel, a small business owner and member of the LGBTQ community. “Transgender and LGBT Texans should not be a wedge issue. We should be treated with respect and dignity, and our transgender children do not need to be bullied.”

Appealing to bottom-line minded conservative legislators, Israel concluded practically: “I would say to our statewide leaders if the moral argument doesn’t touch you, I hope the business community, with their facts and data will resonate."