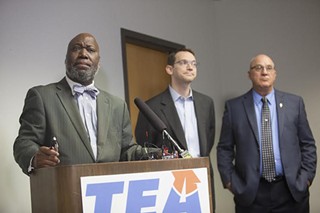 Texas is poised to become the first state with an educational program designed directly to address dating violence and sexual assault among student-athletes.

"Start the Conversation," a new campaign developed by the Texas organization Resources in Learning and spearheaded by the Texas High School Coaches Association (THSCA) and several professional sports franchises, launches in January with the goal of equipping high school coaches with the tools necessary to lead conversations with student-athletes on safe, respectful relationships. According to Love Is Respect, an online resource helping youth learn about dating violence and find help, one in three adolescents nationwide falls victim to physical, sexual, emotional, or verbal abuse from a dating partner. That amounts to nearly 1.5 million American high school students each year experiencing abuse from someone they’re dating.

D.W. Rutledge, executive director at THSCA, quoted the aforementioned statistic during a Friday press conference, in which he noted how “dating violence is affecting youth in every population.” The THSCA, which began in 1930 and currently claims 26,000 members, will be responsible for the campaign’s implementation in classes and locker rooms across the state.

Rutledge says he wants the program to help reduce relationship and sexual violence as well as online abuse by empowering students to create a community of respect, with the hope of “eradicating sexual assault of female students.” However, as Rose Luna, the deputy director of the Texas Association Against Sexual Assault, pointed out Friday, men are also likely to be victimized. In fact, one in five men in Texas become victims of sexual assault, according to the Aug. 2015 report from UT’s Institute on Domestic Violence and Sexual Assault. (For women, that figure jumps to 40%, or two in five.) The study also finds that men are more likely to be raped between the ages of 14 and 17 than at any other age group.

Asked by the Chronicle if "Start the Conversation" intends to address male sexual assault, former Commissioner of Education and current campaign supporter Michael Williams clarified only that the program will “cover the breadth of assault. It can include young men as well as young women.”

"Start the Conversation" will begin its rollout through Texas high schools during the upcoming spring semester. Materials will be made available to coaches across the state that program organizers say will provide an “in-depth curriculum for teaching student-athletes how to prevent sexual assault and harassment.” Both coaches and teachers are invited to share the program with their students and encourage them to recognize and report “inappropriate” behavior. According to the release, "Start the Conversation" focuses on defining sexual assault (aka rape), explaining the legal concept of consent, and exploring larger issues of justice and accountability for one’s behavior.

Commissioner of Education Mike Morath said Friday that while sexual assault is not a comfortable subject to discuss, there’s clearly a need for open, honest conversations to “better support our kids across the country. ... Sexual assault is not a women’s issue,” said Morath. “What we do to mentor our young men can make a major dent in this.”

Three professional sports franchises in Texas – the Dallas Cowboys, Houston Texans, and Houston Rockets – donated money to the campaign, another visible step toward denouncing dating violence in athletics. Over the past five years, both professional and college sports have seen a heavy uptick in sexual assault and domestic violence. In 2014, the National Football League donated an undisclosed amount in excess of $1 million to the National Domestic Violence Hotline (based here in Austin) after two videos were released of former Baltimore Ravens running back Ray Rice knocking his girlfriend unconscious and dragging her out of an elevator.

This past October, another NFL player admitted to domestic abuse. Josh Brown of the New York Giants was originally suspended for only one game, though his suspension was extended indefinitely after league officials learned of the degree to which he abused his wife. Over the summer, Stanford swimmer Brock Turner made national headlines when he was sentenced to six months in jail for raping an unconscious 22-year-old woman on campus. (Though he only ended up serving three of those six months.) Major League Baseball is no stranger to dating violence either. In May, shortstop Jose Reyes received a 52-game suspension after physically assaulting his wife. That same month, the Atlanta Braves’ Hector Olivera received an 82-game suspension after being arrested on charges of misdemeanor assault and battery.