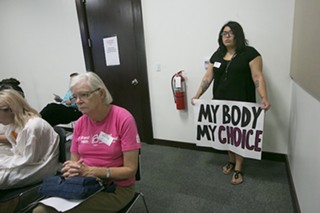 Despite emotional public hearings, roughly 35,000 comments, and major pushback from pro-choice advocates, the Texas Health and Human Services Commission finalized a new rule on Monday that would require women to bury or cremate fetal tissue after their abortion or miscarriage, rather than deposit them in sanitary sewers and medical-waste landfills.

The rule, initially drafted under the radar in July, is set to take effect on Dec. 19 (in 20 days).

During public hearings in August and November, anti-abortion activists – often using loaded and graphic language – praised the rule as a measure that promotes “dignity” and “respect” for the unborn, without pointing to any evidence of the rule’s medical necessity. Pro-choice advocates relayed their personal experiences with abortion and miscarriage and stressed the new rule would serve to shame abortion-seeking women in Texas, add financial barriers to abortion, and further restrict access. Nonpartisan medical organizations, the Texas Medical Association and the Texas Hospital Association, have questioned the rule and its cost burden. According to estimates from the Funeral Consumers Alliance of Texas, the rule could add $2,000 to the price of abortion care, and since the state has refused to pick up any of the tab, the cost burden falls on providers, and then down to patients.

HHSC spokesperson Carrie Williams says after listening to public comment, the commission changed rule language to make clear the regulation doesn’t apply to miscarriages or abortions that occur at home. It also added language clarifying that the issuance of death and birth certificates isn’t required. However, those changes may not be enough for the anti-choice rule to withstand a constitutional challenge following the summer’s U.S. Supreme Court ruling in Whole Woman’s Health v. Hellerstedt. Legal groups argue the regulation is wholly unnecessary, fails to advance any health or safety benefit, and increases the procedure's cost, which poses an undue burden on abortion access. (Sound familiar?) The ACLU of Texas and the Center for Reproductive Rights have hinted at a potential lawsuit should the rule officially pass.