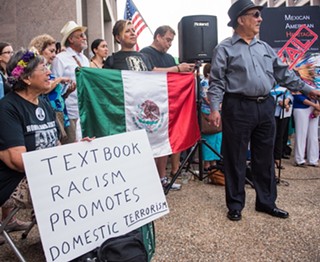 Educators and activists have rallied against the proposed Mexican American Heritage textbook for months. Scholars say the book reinforces negative racial stereotypes and is filled with factual errors. (Photo by David Brendan Hall)

Some textbooks are too politicized for even the State Board of Education to accept. In a unanimous vote this morning, Republican and Democratic SBOE members preliminarily shot down a controversial Mexican-American studies textbook, after months of debate and rallies against the text.

Prior to a vote, university professors, Texas legislators, and public school students held a press conference at the Texas Education Agency yesterday (Tuesday, Nov. 15) to continue their call for the SBOE to reject the proposed Mexican American Heritage textbook, deemed racist and rife with factual inaccuracies. The Responsible Ethnic Studies Textbook Coalition, which also includes the Texas Freedom Network and the Mexican American Legal Defense Fund, say the book dangerously promotes racial stereotypes and is beyond repair. In September, an ad hoc committee of scholars, including University of Texas at Austin professors, found more than 140 errors in the book, which describes Mexican-Americans as “lazy” and Chicano activists as a “threat to society.” In a new report, released this week, the committee found more than 400 factual errors with the book author’s responses to their previous findings.

“In our considered opinion as scholars, we find that the textbook continues to commit serious errors and does not meet other basic expectations,” said Emilio Zamora, a professor of history at the University of Texas at Austin. “Student textbooks must be free of factual errors and based on sound scholarship. This textbook, which was not authored by scholars in the field of Mexican-American studies, fails that test.” Zamora offered to submit his own Mexican-American studies book for consideration by 2018.

SBOE member Ruben Cortez Jr., D-Brownsville, said the divisive book would only serve to “perpetuate the hatred” already being directed toward minority school students in a post-Trump climate. “This book offers one thing: It offers hate toward Mexican-Americans,” said Cortez.

Dozens of testifiers, including public school students and educators, passionately urged the board to vote down the book. Echoing Cortez’s concerns, some parents said the book is even more dangerous today in light of growing aggression toward minority students after the presidential election of Donald Trump, who has vowed to deport 3 million immigrants and referred to some Mexican immigrants as “rapists.” Yvonne Dutchover, a mother for two young children in Austin public schools, said the book would help continue to stoke fears and unfounded anger toward her Mexican-American children.

“Last week, two different students asked my daughter if she could be deported now. She came home and asked me if she could be forced to leave the country due to her Mexican heritage,” said Dutchover, through tears. “My daughter is 9 years old and a seventh-generation Texan. I explained to her what this meant and she asked me if she was bad for being Mexican because of the way the other kids were talking about her heritage. Students read textbooks as truth … just skimming this book I found many factually inaccurate passages and a skewed understanding of Mexican-Americans.”

Former right-wing SBOE member Cynthia Dunbar – an ideological figure who has described public education as a tyrannical “tool of perversion,” and called the Department of Education an “unconstitutional bureaucracy” – heads Momentum Instruction, the book’s publishing company. Board members, including Republican member Thomas Ratliff, R-Mount Pleasant, grilled Dunbar on the integrity of her book, and expressed a lack of confidence in her process.

Dunbar defended her book before the board, saying several changes were made after public concern. (Professors say upon their second review, the publisher failed to correct many of the original problems and even created new errors.) “I promise you, I do not have horns and a tail,” said Dunbar. The former board member accused liberal media and “radical liberal groups" of criticizing the book, despite the fact the rebuke has mostly come from scholars and academics of Mexican heritage. In 2008, Dunbar literally wrote the book on a supposed liberal agenda, One Nation Under God: How the Left is Trying to Erase What Made Us Great.

Before a vote was cast, Ratliff, likely shielding the board from a potential lawsuit from the publisher, stressed the SBOE was not censoring the textbook, rather it was simply following education code. “We are not engaging in politics or personalities,” said Ratliff.

Senators Sylvia Garcia, D-Houston, and José Menéndez, D-San Antonio, said on Tuesday that they plan to introduce bills this legislative session forcing the SBOE to offer optional ethnic studies courses. “The Senate Hispanic Caucus continues to urge the State Board of Education to keep this misleading and factually inaccurate textbook out of Texas classrooms by voting against its adoption because revisions have not addressed the concerns of scholars and experts that the contents of the Mexican American Heritage textbook remain inaccurate,” said Garcia, chair of the Senate Hispanic Caucus.

GOP board member David Bradley, R-Beaumont, was absent from the vote. Emails obtained through open records requests by the Texas Freedom Network revealed Bradley had hoped to “deny the Hispanics a record vote” in November. The board plans to take a final vote on the textbook Friday, Nov. 18. The vote is likely to mirror today's outcome, marking a considerably rare victory for progress at the SBOE.