UT protesters took to the streets Wednesday for anti-Trump march

Maybe it’s pessimism, but in 2016 it’s hard to believe that protests, cathartic as they are, actually bring about the change they demand. Wednesday’s several-mile march from the University of Texas campus Downtown toward the South Congress Bridge and back, past the Capitol, felt different. 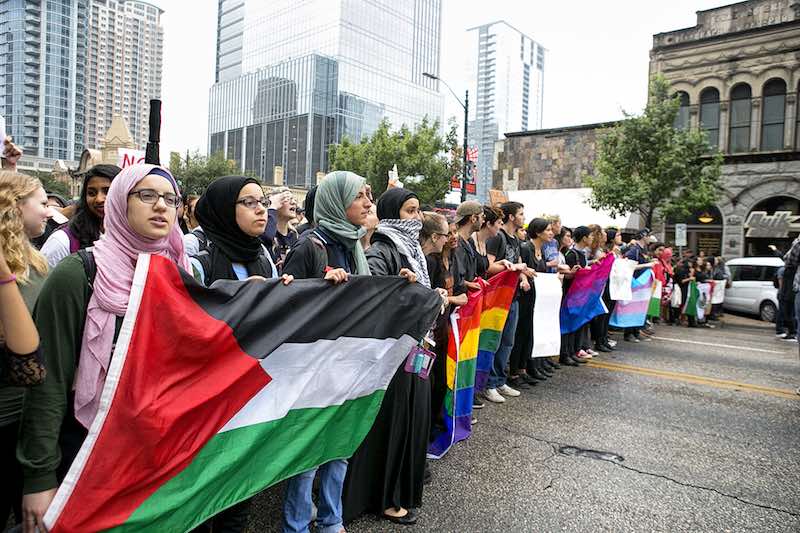 Hundreds of students took to the street in peaceful protest against Donald Trump’s devastating win in Tuesday’s presidential election. In a world where millennials are frequently shat on for their supposed shallow indifference, this anti-Trump march worked as a consolidated middle finger in response. Led by a group of marchers who wore scarves and bandannas to cover their faces, the young protesters appeared not only acutely aware of the issues currently plaguing our country – racism, transphobia, blind hatred toward Muslims – but seemed angry and united.

For millennials waking up on Wednesday morning the world felt scarier than ever before. Rather than wait for terror to pass, students banded together and took over the streets of Austin for the better part of the afternoon and early evening. On the front line, protesters carried a barrier of flags, representing Palestine, Kurdistan, Mexico, and one for Pan-Africa, along with the rainbow, transgender, and bisexual pride flags.

Their chants alternated between English to Spanish. They shouted: “Immigrants are welcome here.” They rallied for black lives, Muslims, transgender rights, and queers. They pumped their fists together in solidarity, and repeated “We stand with Standing Rock.”

Asked why they were protesting, 19-year-old Josh responded: “Because of the bigotry and misogyny of what happened last night. There’s a lot of unrest and a lot of people are upset with what’s going on … I’m a government major so this is actually quite fascinating to me. I’m very excited to see that more than just people that I study with care. I’m one of the very few black men in my major, so it’s good to see people care.”

Re-elected District 4 City Council Member Greg Casar marched alongside the protesters, telling the Chronicle that although he was upset about the national election’s outcome, he was “happy to be here.” Before he disappeared back into the crowd he added: “We’re not going to let him go after immigrants.” 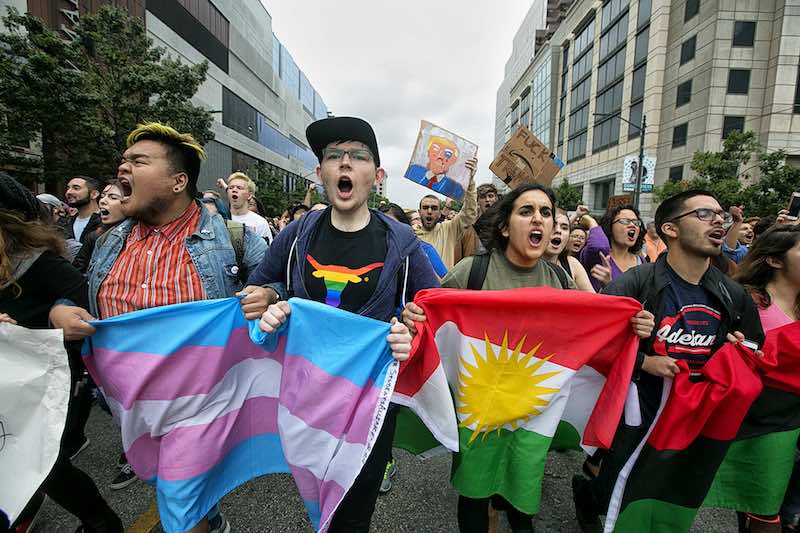 What’s most heartbreaking about Trump’s win is not the man himself – though having a racist, homophobic, xenophobic sexual predator in the White House makes our stomach turn – it’s that approximately 50% of the country is so okay with him taking over the job that they voted him into office. They chose him. We’ve been told, all of us under the “minority” label, that in one way or another our lives are not as valuable or deserving of rights as the “majority.” Nothing is going to get better without each and every Trump-targeted group coming together and actively fighting for the rights our soon-to-be president has promised to repeal, block, and deny.

Will Wednesday’s protest, one of many across the country and one of two in Austin alone, overturn Trump’s unfortunate but fair win? No. But it proves we’re not taking this lying down; we will not accept his win as our loss. And maybe we’re beginning to recognize the importance of intersectionality. Young Americans will not be viewed as apathetic. Perhaps yesterday’s students realized what so many generations previously failed to see, that united we are stronger. Black Lives Matter cannot be separated from the fight for trans rights. We cannot disassociate ourselves from Standing Rock. We cannot bow out of the fight.

When they go low, we go high.