You Don’t Miss Your Water … ’Til It Turns Green

There was good news and bad news at City Council’s Nov. 3 meeting (last Thursday). The best news was a lilting medley from Ruben Ramos and the Mexican Revolution at live music time. The worst was a staff briefing on the future of Onion Creek, if Dripping Springs succeeds in its plan for wastewater disposal. 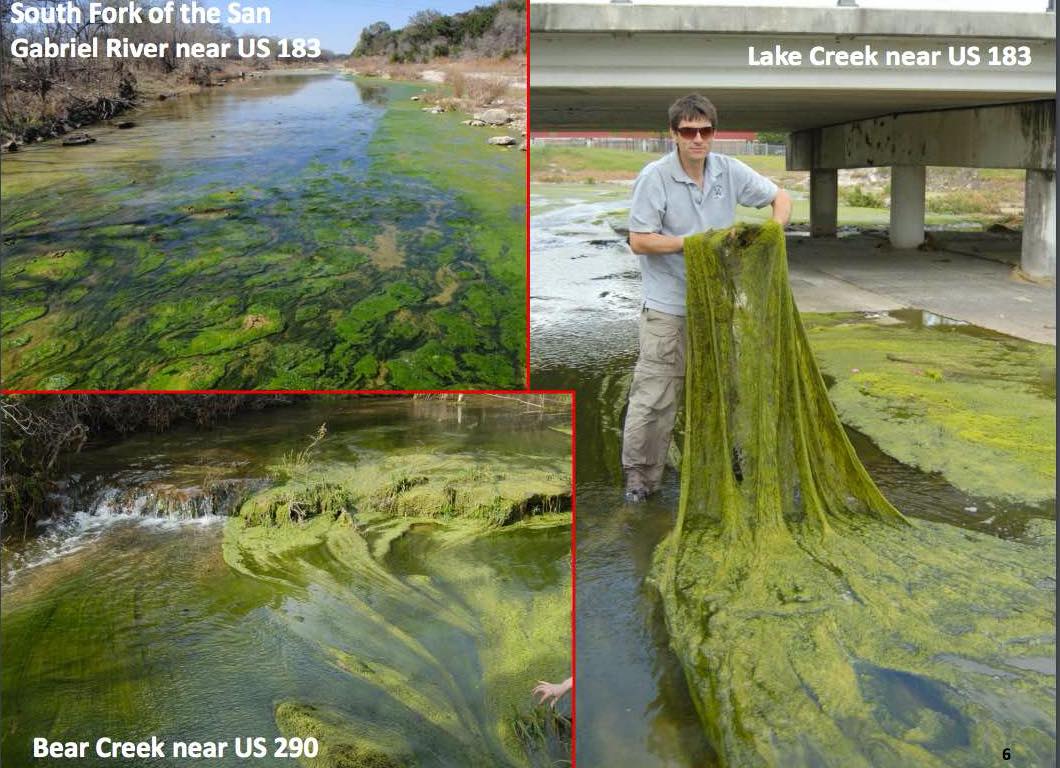 Worst news first: The morning staff briefing updated the Council on the city’s ongoing discussions with Dripping Springs and other stakeholders over the suburb’s application to the Texas Commission on Environmental Quality to discharge, daily, as much as 995,000 gallons of treated wastewater into Onion Creek. The creek is a major contributor to the Edwards and Trinity Aquifers, and thence to Barton Springs, and staff reported that virtually any amount of the wastewater – which would retain contaminants like nitrogen and phosphorus – would degrade the water in the creek, the aquifers, and the Springs. ("Council: From Trash to Treasure," Nov. 4)

The effluent discharge permit is not imminent – the earliest a permanent one could happen is March of 2017, and it would provide a secondary method to spraying on land (the current practice) – but Dripping Springs is growing, land is expensive, and the Belterra development set a precedent in acquiring a discharge permit (which it hasn’t yet used). City of Austin staff has been working with Dripping Springs staff and other stakeholders in hopes of finding alternatives, but Dripping Springs told the Austin Monitor last week that they’re moving forward with the application.

The city of Austin officially opposes the permit, and eventually there may be a contested case hearing and perhaps lawsuits from downstream landowners. District 2 Council Member Delia Garza appeared to express the majority’s sentiment when she said, “I don't think I need to be a chemist to know essentially it's treated poop being asked to be put in our water.” But CM Don Zimmerman said he wanted to hear more from the Dripping Springs perspective – perhaps on the theory that District 6 boundaries now extend into Hays County – and pointed out that Austin already discharges some of its effluent into the Colorado River. That’s true, acknowledged Watershed Protection Department Chief Engineer Chris Herrington, but the difference in volume dilution and geology between the Colorado and (often dry) Onion Creek make the comparison unilluminating if not absurd.

Council thanked staff for the update but took no action. The next immediate step is a TCEQ public hearing at Dripping Springs Ranch Park: 7pm, Thu., Nov. 10, at 1042 Event Center Dr. (For more info, see www.protectourwaternow.org.) In other matters, Council:

• Approved a six-year interlocal agreement, at a contract limit of $3.6 million, with Dallas County via the Southwestern Institute of Forensic Sciences at Dallas, to help the Austin Police Department reduce its forensic analysis backlog. City staff agreed to return to Council in a month with an update on progress. (CM Zimmerman complained that a change in the form of posting language required a postponement, but couldn’t get a second for his motion.)

• Approved a $617,000 contract to complete an ADA-compliant fishing pier on the Lady Bird Lake Boardwalk – over objections from D3 CM Sabino Renteria that the original plan had been to put the pier on the north side of the lake, near the I35 crossing and the Rebekah Baines Johnson senior apartments. Other Council members echoed his remarks, voting to approve the contract but indicating they would look for a way to provide a pier on the north side as well. CM Zimmerman used the occasion to object to the Boardwalk altogether as a waste of transportation funds, and said the contract should itself be moved to the north side. Failed for lack of a second.

• Postponed until Nov. 10 third reading on zoning amendments to the Champion Tract (City Park Road at FM 2222), after many neighboring residents and their representatives testified that the amendments would result in an oversize, traffic-heavy, incompatible development and should be rejected. The public hearing will remain open to those who haven’t yet testified.

• Postponed to Nov. 10 a resolution that would initiate historic zoning for a four-plex at 1618 Palma Plaza in the Old West Austin neighborhood, over the owner's opposition, despite no recommendation of same by either the Historic Preservation Officer or the Historic Landmark Commission. Mayor Pro Tem Kathie Tovo and other CM’s suggested they want to tighten requirements for allowing demolition permits on houses deemed (by somebody) "historical."

• Approved the cancellation of Nov. 8 work session (election day). Dais toyed with canceling Nov. 10 regular meeting (wasn’t posted for action, so legal staff advised using Council message board to indicate absences). But when they considered the burgeoning postponements to that meeting – and the looming return of the Grove PUD – they stuck with the schedule.

There was, finally, a romantic bilingual medley from Ruben Ramos, which made the next three hours (the meeting adjourned just before 9pm) almost bearable.

The agenda for the Nov. 10 meeting is available here. You can review more detail from the Nov. 3 meeting here. For more on City Council, follow the Daily News and this week’s print edition.