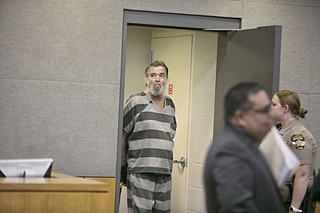 The turning point in Mark Norwood’s trial for the 1988 murder of Debra Baker should come Monday morning. Prior to the jury’s 10am posting to the 390th District Court, Judge Julie Kocurek is expected to rule on whether to allow discussion of the 1986 Williamson County murder of Christine Morton.

Norwood, 62, was convicted of Morton’s murder in 2013, after the high-profile 2011 exoneration of Morton’s husband, Michael. (Michael Morton has been in Kocurek’s courtroom throughout Norwood’s current trial, sitting among the members of Baker’s family. He would in all likelihood be brought up to testify if discussion of the murder is to occur.) Norwood has always claimed innocence, but never in convincing enough a way to sway appeals judges that the bandanna holding traces of his DNA (and some of Morton’s blood) found at a construction site within 150 yards of Morton’s home didn’t put him in the house on the day that she was killed. Norwood’s conviction, secured in a San Angelo County courtroom in an effort to get away from the Central Texas media scrum surrounding the murder, came in part because special prosecutor Lisa Tanner was able to use the circumstances of Baker’s murder to form the basis of a “signature crime.” Both victims were young mothers bludgeoned to death in their homes on the 13th day of the months, 17 months and 20 miles apart. In each case, something was stolen from the house during the murder. DNA evidence ties Norwood to both homes.

The consideration of whether to bring in the Morton case has never been in question for Travis County prosecutors Gary Cobb, Allison Wetzel, and Katie Sweeten: For them, there’s value telling a jury that an accused killer has already been convicted for killing another person. Norwood’s attorneys Brad Urrutia and William Browning have thus far tried to keep conversation of Morton’s murder out of Kocurek’s courtroom. There was a near panic from both desks on Tuesday when 92-year-old Gertrude Masters, Baker’s mother, who found her lying in bed the morning after her murder, began to blurt out during her testimony that she hadn’t seen a photo of Norwood until “that trial,” meaning Morton’s. But on Friday, just before the court recessed for lunch, Norwood told Kocurek that he wanted testimony about Morton’s murder brought into the trial. His thinking: If he could poke holes in that conviction, it may help him in regards to this one. Norwood later recanted, bringing the trial to where it is right now. On Monday morning, jurors may find out just how far this case extends.

Friday’s deliberations provided the jury with deeper analysis into DNA. Lee Hernandez, a former crime scene specialist with the Austin Police Department, answered questions about her involvement in the case: She was the specialist who went out to Bastrop with Detectives Jerry Bauzon and Mark Gilchrest to provide transport of the hair samples and buccal swabs Norwood provided to police from his mother’s home in 2011. (Browning brought up Hernandez’s 2012 resignation during cross-examination, submitted after she’d been accused of mislabeling evidence.) Jurors also heard testimony from Shelly Johnson and Bonnie Higgins, two employees at Mitotyping Technologies (State College, Pa.), the lab that conducted testing on Norwood’s hair samples. Johnson built on Thursday’s testimony from DPS lab technician Allison Heard, saying that the matchup of DNA found on the hairs taken from Baker’s home and pulled from Norwood’s head exclude 98.9% of the North American population as a suspect. Both were asked to answer, however, to issues with the delivery of Norwood’s three hair samples: When the three evidence packets arrived at Mitotyping, only two hairs were found within the package. One hair, labeled Q3, never showed up in State College. Sweeten made quick work to indicate that this was common.

The day’s testimony both began and ended with APD Detective Jerry Bauzon, who was working the department’s Cold Case unit when Norwood became a suspect. (Thursday closed with Bauzon on the stand, and an audio tape recording of his 2011 conversation with Norwood at Norwood’s mother’s home. That recording continued Friday morning.) Bauzon recounted getting a subpoena from a Travis County grand jury a few days later and bringing Norwood into Austin. An audio tape of the conversation on that ride played over the courtroom’s speaker system, as well. Most prominent was a question posed to Norwood about which hand he’d use to swing a hammer: He eats with his left, he writes with his left, but if he was banging a nail, he’d use his right.

Bauzon was brought back to the stand on Friday afternoon so that the prosecution could show video of Norwood’s interrogation down at APD headquarters. It was there that Gilchrest and Bauzon presented details to Norwood about how DNA evidence (the three hairs) linked him to Baker’s house. The two questioned him on what would have put the hairs in her home. “I think you were in the house to steal something,” Gilchrest was seen saying. “Something happened . . . that was out of your control.” The tape showed Norwood consistently denying the accusations and saying that he did not know Baker or the house she lived in, despite Bauzon and Gilchrest’s insistence he was at least accomplice to the murder.

The last image of Friday’s testimony found Browning grilling Bauzon on that interrogation, questioning the detective on why they presented Norwood then with a “fake” DNA report to try to coerce confession. (Bauzon said the report they showed Norwood had “factual numbers” even if it may have not been a true and accurate DNA report, and that it was presented to Norwood after a discussion between detectives, their supervisor, and an unnamed assistant district attorney. “Something seen carries more weight than something heard,” explained Bauzon of the decision.) But Browning appeared committed, and brought with him an urgency not previously seen during the trial. “After over an hour of questioning, [Norwood] was solid in denying the charges against them,” he noted. “Is that correct?” Bauzon confirmed the observation. Again, Sweeten was quick with her response, noting too how during interrogation Norwood had denied a number of other details (particularly that he was responsible for a string of burglaries in that neighborhood) that had already been confirmed earlier were true.

Kocurek’s consideration of the Morton case is expected to begin at 9am Monday. In or not, Norwood’s trial should continue through this week.

Read Chase Hoffberger's Dispatch 1 and 2 from the Morton trial.