Norwood Trial: Setting the Scene of the Crime 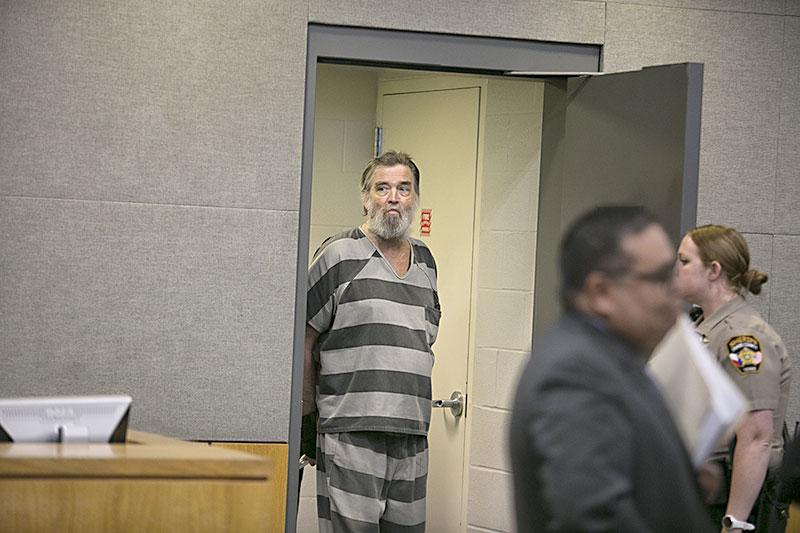 Mark Norwood at a preliminary hearing in August, 2016 (photo by Jana Birchum)

Together, those witnesses laid out the basic framework of who Debra Baker was and how she happened to die. The 34-year-old mother of two was living in North Austin in the late Eighties when she was bludgeoned to death in her bed on the night of Jan. 13, 1988. Her two children, Jesse, 7 years old at the time, and Caitlin, 4, were at their father’s house down the street. (Their father, Philip Baker, and Debra had separated but remained close with one another.)

Baker spent the evening of her death with her two sisters and their mother, Gertrude Ann Masters, in South Austin, where they threw an impromptu baby shower for a friend. Baker, her mother, and one sister, Lisa Masters Conn, returned to Baker’s home that night; eventually, her mother and sister trickled out. Masters, who’s now 92, testified on Tuesday that she became worried the next morning when Baker did not answer her phone calls. She drove to Baker’s house and saw her car still in the driveway. That, she said on Tuesday, is when she knew something was wrong. She went inside and found her daughter lying face down on her bed, the pillow underneath her head completely soaked with blood.

Masters ran to the phone and dialed 911. Leo Enriquez, a former APD assistant chief who in 1988 was working patrol around North Austin, was the first officer to respond. He was followed shortly after by Robert Cearley and Rudy Landeros, the two homicide detectives who first investigated the scene and crime. All three testified on Tuesday. Through evidence arranged by district prosecutors Gary Cobb and Allison Wetzel, they provided jurors with a visual tour of Baker’s home, from the backyard to the living room to the bedroom, where eventually jurors and those in attendance were presented with a series of pictures of Baker’s beaten and bloody corpse. The prosecution labored over the contents of the home, particularly the objects on and around the television, where a VCR was reportedly stolen during the murder, as well as the sliding door in the back of the house. Much to the chagrin of mother, sister, and husband, Baker rarely locked that sliding door. Based on some ruffled leaf piles in the backyard and the fact that there were no signs of forced entry, it’s believed that whoever committed the murder entered through that door.

Perhaps the most notable witness to testify during Tuesday’s proceedings was Mary Huffstutler, a former neighbor of Baker’s who now lives in Ohio. She’s the one who said she saw someone walking away from the direction of Baker’s house shortly after 10:30pm, around the time that it’s believed Baker was murdered. (Her dog’s barking is what triggered her to look outside.) According to her statement to police a few days after the murder, Huffstutler saw a white man, “medium build” between 5’8” and 6’1”, walking in dark clothes and a ski cap with his hands tucked into his pockets. She said that she couldn’t see his face but could see his cheek, and that he wore a mustache. Norwood’s attorneys Brad Urrutia and William Browning challenged Huffstutler on her statement, bringing into question the disparity between a man who’s 5’8” and one as tall as 6’1”. Like many details discussed Tuesday, Huffstutler was unable to provide a concrete assessment. This all happened 29 years ago, and much of the time in between has been spent thinking that the case would go unsolved.

The defense may have scored itself a few more points during Cearley's and Landeros’ testimonies. During the former, the prosecution presented a photograph of a wooden tee-ball bat with a bloodstain on the barrel. It’s unclear if the bat is considered to be the murder weapon. Expect its handle – and any potential hints of DNA evidence – to materialize sometime later in the trial. Landeros’ testimony was peppered by questions from the defense team with regard to changes in evidence collection procedures practiced by APD. Landeros, for example, did not remember if he wore gloves when combing through murder scenes back in 1988.

One other notable detail emerged during the testimony of the day’s final witness, Hsi-Min Chung, Baker’s landlord at 1206 Dwyce Dr. The prosecution centered its line of questioning into Chung around work reports he’d maintained for the home, particularly those from 1986 and 1987, when Baker moved in (that February). During that questioning, it was pointed out that Chung purchased a new rug for the living room from JCPenney. During the state’s examination, conversation hung on that rug’s purchase. But when the state passed the witness, Urrutia presented Chung’s work report from 1985, a year in which Chung and his family lived at the home for part of the time before moving out and preparing it to be rented – eventually to Baker. That report listed a carpet installment through the entire house. Norwood, it’s been well-reported, worked intermittently as a carpet layer throughout the Eighties. Outside after his testimony, Chung could be overheard expressing his surprise that the defense was able to procure his ‘85 work report.

The trial continues Wednesday, and is expected to run through the next two weeks.