Rick Perry, Lord of the Dance?

Why would a former Texas governor go on reality TV? Why not? 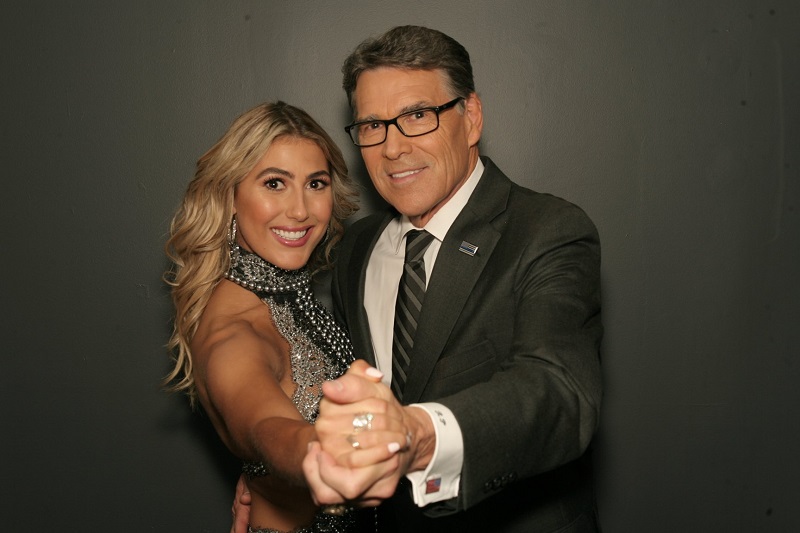 Dancing with the Stars pro Emma Slater and her next dancing partner, former governor and former presidential aspirant Rick Perry

Rogers. Nijinsky. Baryshnikov. Graham. Legends of Terpsichore. And now … Rick Perry. The former governor of Texas and two-time GOP presidential primary loser is joining the cast of Dancing With the Stars, because … well, what else was he going to do?

Let's cut to the chase: The odds of Perry winning are so long that you'd be safer letting your money ride on a third presidential run turning out successful. He's going up against Olympians (Laurie Hernandez and Ryan Lochte), professional athletes (Calvin Johnson), and Vanilla Ice. And, love him or hate him, rapper-turned-real estate flipper Robert Matthew Van Winkle has some sweet moves.

So that's double bad news for his professional dancing partner, British Latin expert Emma Slater: She'll be stuck with Perry, and she'll be on her sixth losing season. Oh, well, at least she'll always know that she got to dance with Billy Dee Williams.

Perry must have some motivation for dropping into the hurly-burly of reality television. He told the Austin American-Statesman, half jokingly, that it was prep to dance with his daughter on her wedding day. More seriously, he announced via his Twitter account that "I’m dedicated to helping #veterans however possible, and I’m going to use @dancingabc as a stage to do that."

His stated reasons are, in turn, adorable and admirable. But that said, obviously, the money can't hurt. Yes, since leaving office Perry has been drawing his $90,000 a year pension: However, that's a lot less than the $150,000 plus a free bed in the Governor's Mansion he was pulling while still in office. Plus he was actually double dipping, pulling down both his salary and his pension.

Or maybe this is a stepping stone back into politics. Dancing With the Stars joins together two seemingly pathological needs in American pop culture: TV's desire to play "where are they now?", and the passion of former celebrities to achieve some kind of public redemption.

Think it's a coincidence that Heather Mills was on season 4 the year after she divorced Paul McCartney, and her reputation was in the shredder? Or that boxer Floyd Mayweather was on season 5 with a slew of charges for violent offenses under his multitude of title belts? And then there's former Texas Congressman Tom DeLay, who appeared on season 9 while he has under indictment for money laundering and conspiracy charges.

Perry may have fought off his own felony charges over trying to kneecap the state's Public Integrity Unit, but he scarcely skated out of office unscathed. He's made cursory attempts to revamp his public persona (those infamous game show host glasses, for a start). But with his name being touted as a potential challenger to embattled Sen. Ted Cruz in 2018, what better way to keep his name current, and add a kinder, gentler sheen?

Or maybe there's a more visceral reason for his adventures in TV land.

Politicians can generally be broken down into two categories. Those that like running, but generally don't like actually doing the job, and those that love the minutiae of governance, but, on the whole, hate the whole life-on-the-stump, rubber-chicken-leg-circuit part of the election process. Those that love equally running for and being in office are a true rarity (ask any staffer and/or campaign manager), but even more tough to come across are those rare night-blooming flowers of politics: those that neither love running nor love being in office.

For a moment, let's drop into the parlance of pro wrestling. There are good guys, or faces, and bad guys, or heels. Good guys always want to fight the good fight. Most heels will fight, but they'll cheat, bully, and do what it takes to win.

But there's a subset of heels, the weaselly heel. They like to be champ, but will run laps of the ring to avoid a fair match. This raises the obvious question: If you don't want to fight, why become a fighter?

It's the same with Perry. He's a case study in the Peter principle, forever drifting upwards – at least in Texas. Why he ran for office as a Democrat in 1984 still seems a little baffling, but his jump from Democrat to Republican in 1989 seems obvious: It was a lot easier to run as a GOPer in an increasingly red state. As agriculture commissioner, as lieutenant governor, and then governor, it's hard to spot a race in which he was really forced to fight.

It was arguably notorious Republican fixer Karl Rove that took down incumbent Ag Commissioner Jim Hightower in 1990, rather than any charms of the recently converted Perry. The last real race for Perry was for lite guv in 1998 (after he had fallen out with Rove), which Perry won of course. Yet considering he beat Democrat John Sharp by less than two points, rather than George W. Bush's 37-point evisceration of Garry Mauro, the win was scarcely a glowing endorsement of his campaigning skills.

So ever since, he's played the weaselly heel, refusing to engage on the trail. Here's the thing: It worked. After being elevated to the state's top spot after Bush migrated to the White House in 2001, Perry just stood by as Democrat Tony Sanchez flamed out in his 2002 challenge for the governorship. Then Perry let the four-way political sideshow of 2006 play his way, as the press corps became fixated over stunt candidates Carole Keeton Strayhorn and Kinky Friedman, at the expense of former Congressman and serious contender Chris Bell. In 2010, he simply no-showed the debates with Bill White, leaving the former Houston mayor shadowboxing.

It may not be much of a tactic, but considering Perry never lost an election, can't blame him for it. Weaselly heels may not win fights, but they don't lose the belt either.

That is, until he ran for the presidential nomination in 2012. His national legacy will always be the "Oops" incident in which Perry forgot his own talking point, onstage, in the middle of a CNBC televised debate. That moment revealed the real Perry – not, as some glibly described him, stupid, but not a fighter. Not only could he not be bothered to memorize a cornerstone of his own platform (because which federal agencies you would shutter is kind of a big issue), but thinking he could wash that glitch away with a simple "oops."

This wasn't Texas, where the red base meant his No-Show Jones tribute act was enough. In fact, it showed the wisdom of that strategy at the local level: Imagine the political consequences if he'd oopsed during a debate with White? But in 2012, he was the dogfish in the GOP's shark tank. When he came back last year for another presidential run, Texas' prognosticators were falling over themselves, claiming that Perry 2016 was battle-tested and ready for the fight. But it doesn't matter how many times a dogfish circles the tank: They'll never become a Great White.

Perry loves the spotlight, that's for sure, and politics did okay by him for years. But now it's done with him, and there are no signs that his supposed post-gubernatorial career as some kind of free-roaming diplomat without portfolio, like a conservative Tony Blair, will ever happen. Indeed, considering that it would require massive travel and a head of nuance, it always seemed doomed for disaster.

Of course the next stop would be competitive reality TV. And while political launching pad The Apprentice is clearly looking for a new host (think Donald Trump is a presidential candidate because of his investing skills?), memorizing the fox-trot seems far more Perry's speed. 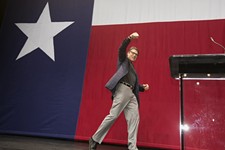 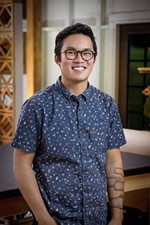