Morrow vs. Trump vs. the GOP 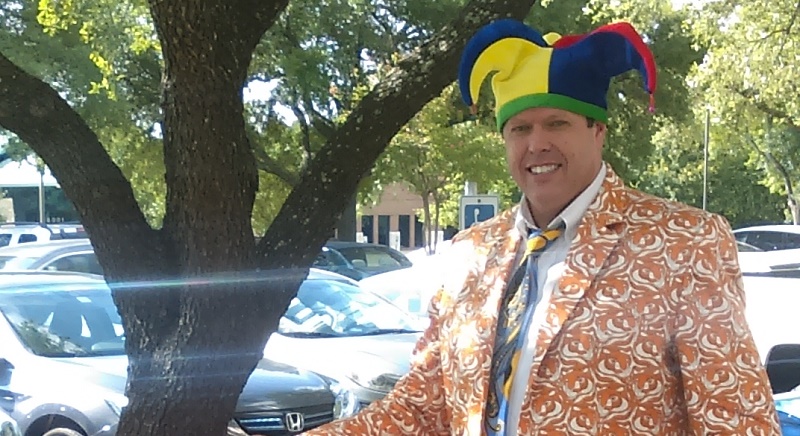 "Nothing interesting ever happens here," the office worker with the oversized iced drink said.

Well, the man in the tiger jacket and jester hat, carrying the "Donald Trump is a Child Rapist" sign downstairs, and the emergency Travis County Republican Party press conference upstairs, certainly put an interesting spin on her day.

Call them two rings of the same circus. Outside of a nondescript office complex off US-183, grinning and sweating in his Princeton jacket, was now-former TCRP county chair turned write-in presidential candidate Robert Morrow. Upstairs, the new county hierarchy had found a legal out to bounce Morrow from his elected position.

The issue, per Executive Vice Chair David Duncan, was that Morrow had made himself ineligible to be chair by filing paperwork to run as a write-in presidential candidate. Running for state or federal and holding the office would be a violation of state law (Section 161.005 of the Texas Election Code): Duncan called the act of filing "tantamount to a letter of resignation," and so their hands are tied.

The party will hold an emergency meeting on Sept. 20 (if they can get 50% of precinct chairs present to hit quorum) to select Morrow's permanent replacement. As for Morrow, TCRP Communications Director Andy Hogue told the press packed into a tiny upstairs office, "We're glad he has stepped outside our big tent. We're bigger than that, but he has stepped outside our fringe."

Showing the level of friction, Duncan admitted that the party hadn't officially told Morrow he was out, and that he had probably heard via the news media. In fact, they could (if they had wanted to) have saved him from removal. Morrow filed on Aug. 19, and the party managed to get hold of that filing two days ago. At that point, rather than call Morrow, the party decided to have their counsel make sure all their ducks were in a row, even though his filing didn't become official until it was certified by the Secretary of State yesterday. In fact, instead of calling Morrow, they called an emergency meeting of the steering committee to prepare for his removal. Moreover Duncan noted that Morrow had been saying "for quite some time that he was planning on running for president, so we've been watching for this."

The party is technically now leaderless, but the bigger issue may well be that it is emerging from bankruptcy. However, that wasn't Morrow's fault: That happened under his predecessor, James Dickey, who had run the accounts into the ground so badly that there was only $1,500 in funds when he left.

Since then, the finances have been handed over to the newly founded Friends of the Travis County Republican Party. They've managed to get the balance up to closer to $6,000, but Duncan suggested that was in spite of rather than because of Morrow. Duncan said, "Many of our traditional donors have been hesitant to give money to the party after watching Mr. Morrow's antics." With his exit, he said he will be calling those same donors to tell them, "Guess what? Mr. Morrow's not there any more."

When asked what he expected Morrow to do, Duncan said he had no idea. Well, if he'd walked downstairs to the parking lot, he could have asked Morrow himself.

The quick answer: running for president. Morrow said that he hadn't read the rules before filing, "but the election code is clear. You cannot be president of the United States of America, or even a candidate, and the chair of the Travis County Republican Party at the same time." So now he goes back to focusing on his attacks on Trump, especially the rape lawsuit filed against the aspiring oligarch in New York. If the allegations are true, Morrow said, "Trump should be in jail, big time. ... Ask the steering committee – are they going to support a child rapist for president?"

As for the claim that Dickey had left the party in financial straits, Morrow said that could scarcely be blamed on one person, and that he had been surprised how frail and disorganized the infrastructure was when he was elected. "It's a shoestring operation."

For Morrow, finances are the least of the party's problem. The biggest issue is Trump, and he has his own theory as to why the bulk of the party is falling into at least some degree of lock-step with their damaged presidential candidate: They're trying to keep his margin of defeat under 10 points, and keep the third of the party that backs him on-board to aid their own ambitions. "Most of the Republican Party is waiting for Trump to crash and burn, and then they can pick up the pieces of the party after November."