Zimmerman Does It Again [UPDATE]

D6 council member tells children to "do something useful"

District 6 Council Member Don Zimmerman was roundly booed at last night's City Council meeting after he told a group of young student witnesses that they should "do something useful" and not "live off others" when they grow up. D2 CM Delia Garza responded for the council, "We do not condone what he said." Zimmerman's comments came in the midst of public testimony about the proposed Fiscal Year 2017 city budget. Several young students, accompanied and seconded by their parents or teachers, had testified about the importance of city support for Austin ISD afterschool programs, both as educational opportunities and help for working parents with demanding jobs. "I know that we have a wonderful afterschool program at Hart Elementary," said one young student, "and I'm proud to be a part of this ["Rocket Peace"] program that helps me and another 248 students in my school."

When the student testimony was concluded, D10 CM Sheri Gallo, as is her custom, thanked the students and asked them to raise their hands and promise that when they turn 18 years old, they will all register to vote.

Before testimony could resume, Zimmerman followed with his admonition: "I'd ask for everyone here, including the children, when you grow up, I want to ask you to pledge to finish school, learn a trade, a skilled trade, get a college education, start a business, do something useful, and produce something in your society so you don't have to live off others."

UPDATE: Late Friday afternoon, Zimmerman released a statement saying he had given the schoolchildren "the same advice he would give his own son." (See below.)

Many in the audience booed, but his council colleagues are so accustomed to similar declarations from Zimmerman that they often simply ignore him and move on – and that's what happened initially last night, as Mayor Steve Adler resumed the testimony. Nearly two hours later, D2 CM Garza interrupted the testimony to "make a general statement," also acknowledging her role as the first Latina on City Council.

"The issue of the challenges y'all face," Garza began, "simply because of the color of your skin or your last name – earlier, Council Member Zimmerman said something that was really offensive and it happened really quickly, and now I'm hearing from members of our community that they're disappointed that more of us didn't stand up and say something. … I want our community to know that we do not condone what he said, and we have your back, not just the ones that are brown or black on this dais. There are other progressive members of this Council that support you and understand your issues." 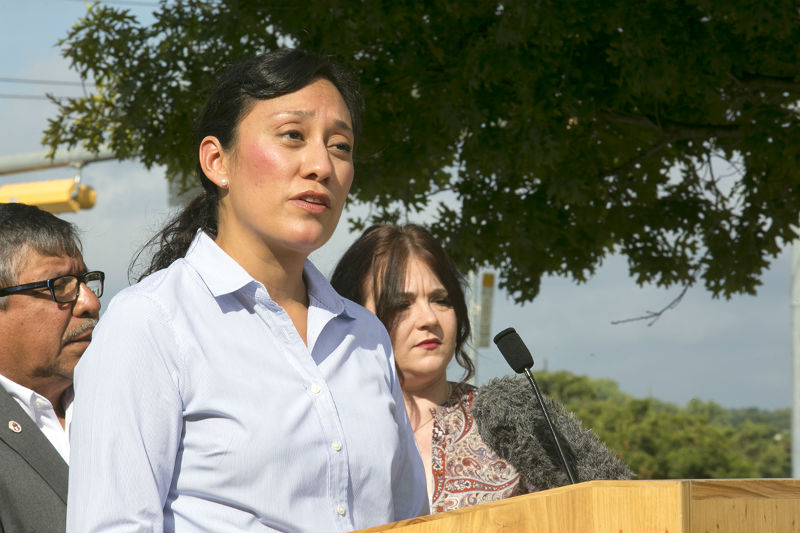 Friday morning on her Facebook page, Garza supplemented her remarks.

"I wish I had responded quicker," Garza wrote, "but honestly, and unfortunately, I often stop listening when he starts talking because these types of comments for him are not uncommon. I did eventually respond because I felt it necessary for the public to know that the majority of the Council does not condone his hateful comments. After adjourning close to 1:00 a.m. and getting some sleep I feel the need to say a little more because this hateful rhetoric towards Latinos in our community is unacceptable and has to stop.'

"Mr. Zimmerman will never fully understand the privilege he enjoys," Garza continued, "simply because of the fact that he was born a white male, nor will I attempt to explain that to him here. Latino families have lived through years of institutional discrimination but continually push on and work hard to support their families.'

"Do something useful you say Mr. Zimmerman? Let me tell you all the useful ways the Latino community contributes to our community – they help build the roads you drive on, pick the food you eat, repair needed infrastructure, clean the buildings where you work and live, serve the food you enjoy, patrol your streets, give CPR to heart attack victims, run companies, and sit on the dais next to you. And that’s just the short list of the ways we as Latinos 'do something useful.' And many who do the most back breaking work aren’t paid a fair wage and even have to deal with wage theft, followed by threats and intimidation when trying to get back those wages they have rightfully earned. So even after working long and hard days, they still sometimes can’t make enough to support their family ….'

"No mother wants to have to go lobby her local government to ask for help with after school programs," Garza posted. "She does it because she knows that program will allow her to continue to work so she can have the ability to put food on the table for her family. She does it because she wants to make sure her children never have to do the same." (Garza's full post is available here.)

Other CMs acknowledged the troubled session on social media.

The real story from last night isnt Zim. It's how much more powerful our families' voices are than his. More here: https://t.co/5sS91jTrHx

Looking for a brightside to y-day's council meeting? Heres a life changing res from our 1st Latina CM @DeliaGarza. https://t.co/jMa72UrLv5

Zimmerman later doubled down on his Council remarks, texting a KXAN reporter, “On behalf of those non-subsidized taxpayers being forced out of our city by legions of special interests, I apologize for the greed and selfishness of those willing to expand city government force, through the ‘political process’ to maintain and increase their own subsidies at the unaffordable expense of others.”

For the record, the city of Austin's support for certain AISD programs is in part an effort to lessen the burden on Austin taxpayers, as much of AISD's own property tax revenues are returned to the state via recapture, under the Legislature's public school funding system (aka "Robin Hood"). City tax revenues are not affected by recapture.

Meanwhile, Jeff Stensland of Time Warner News reported (via Twitter) that Zimmerman is refusing all follow-up interviews except one. His aide Joe Petronis texted Stensland: "For this story Don is giving an exclusive with Fox."

Zimmerman is running for re-election in November, one of the five council candidates who drew the initial two-year terms to begin staggering council elections. His opponent, Jimmy Flannigan, issued a statement saying in part: “Council Member Zimmerman has now attacked a group of school children who did nothing more than provide testimony asking for support for their after-school program. Instead of encouraging them to continue participating in their government, thanking them for their time, or simply saying nothing at all, Council Member Zimmerman saw fit to make offensive and condescending remarks to children. …'

"These are not the values of District 6," concluded Flannigan. "His offensive statements, ideological grandstanding, and constant bullying are an embarrassment to our community and it's time for him to go.“

UPDATE: Friday afternoon, after Zimmerman's council statement had received widespread criticism and demands for an apology, Zimmerman released a statement rejecting any apology and saying he had simply encouraged the schoolchildren "to pledge to finish school and pursue a lucrative career rather than expect government subsidies to foot the bill for day-to-day living."

Zimmerman said there was no "racist motive" to his statement, and pointed to earlier instances when he had said similar things, including about his newborn son. "If my comment was designed to humiliate our young guests yesterday evening," the council member asked, "then that begs the question: why would I say that about my own newborn son, or even myself?" The press release went on to cite earlier instances when Zimmerman had advised others to "do something useful" rather than become "a government official."

Zimmerman concluded: "The only people we should be apologizing to are non-subsidized taxpayers and business owners who are being chased out of Austin due to the runaway cost of government."