Last Thursday’s City Council meeting featured the usual brace of postponements, but moved forward on a couple of Big Ideas: Mayor Steve Adler’s “Go Big” Mobility Bond and an attempt to lessen the burden on a beleaguered group: poor folks caught in the grim cycle of the Austin Municipal Court. 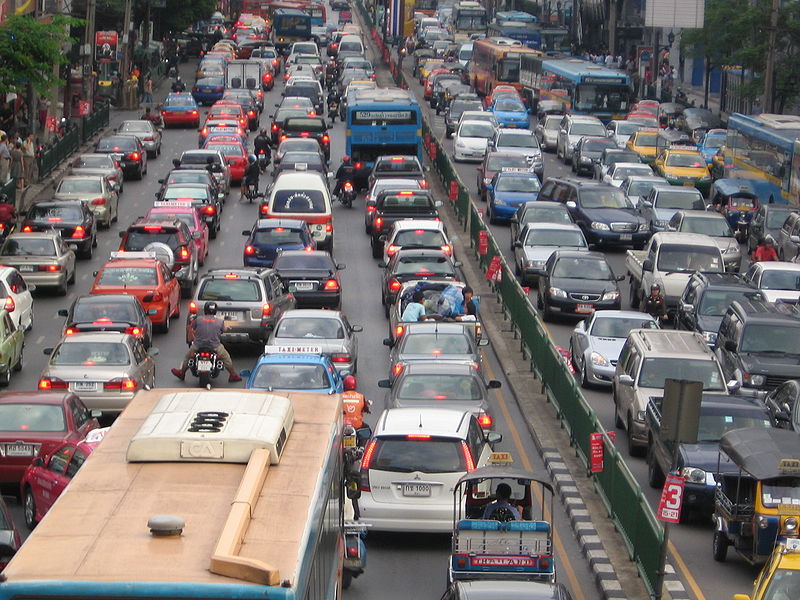 No, not MoPac: Bangkok traffic jam (Photo by Gemma Longman/CC-By-SA)

First, the postponements – the desultory list includes almost every agenda item Daily News previewed earlier as one to watch for:

• The Grove at Shoal Creek: The embattled planned unit development at 45th and Bull Creek will await its day (and night) in Council for at least another month, postponed at the request of “the neighborhood” until Sept. 22. Council Member Sheri Gallo (representing District 10, where the tract is located) suggested that an agreement between the neighborhood opponents and the developer appears more imminent, but responses from Mayor Pro Tem Kathie Tovo (D9) and D7 CM Leslie Pool suggested that the parties remain very far apart.

• Zoning Cases: Including Shoal Creek, 19 of about 30 zoning cases were either postponed or approved on first reading only, meaning that in due course they all will come ’round again. That included an East MLK Blvd. tract owned by St. James Missionary Baptist Church and planned for townhouse/condominium zoning. Council took it up for a lengthy discussion before the 11pm adjournment, but punted it as well to Sept. 22.

• Other postponements of note included: a Council discussion of the FY 2017 “Concept Menu" of proposed budget amendments (to return in Wednesday's budget work session, and our budget overview in this week's issue); extension of an ongoing contract with the Convention and Visitors Bureau (postponed to this Thursday, Aug. 18); long-delayed Downtown concrete-pouring regs (also to this week); two contracts concerning biosolids management at Hornsby Bend (discussed at some length in malodorous detail, and then punted to Oct. 6).

• Council did manage to direct the city manager to establish a Bond Advisory Task Force (aimed at potential future bond propositions in the next couple of years), after hemming and hawing at great length over just who should be allowed to volunteer to serve on the advisory committee (e.g., the usual hyperbolic suspicion of “lobbyists”).

That brings us to the substantive items approved. Kicked off with a morning press conference, Council passed a resolution sponsored by District 2 Council Member Delia Garza (co-sponsored by Casar, Renteria, Pool, and Kitchen) that would formalize the constitutional requirement (Sixth Amendment) that people not be jailed by Municipal Court judgments for inability to pay fines.

This is already official court policy, but the resolution (directing the city manager to bring back both information and a formal proposal) would more accurately define “indigency” (acknowledging Austin's high cost of living), regularize the process for various courts, and confirm that the alternative of community service be available for those who demonstrably cannot afford to pay a fine. (Staff is to return with a formal proposal in 90 days.) Thousands of people per year pass through the Muni Court system, and it’s not yet clear how many of those would be affected by this proposal. CM Garza said, “The resolution we will pass today will ensure our City Code fully reflects the values of our community, our Constitution, and plain common sense. No one should be put in jail for being poor.”

The other headline item passed Thursday (on first two readings) was the November ballot proposition for the Mobility Bond, after some amendments covering the central package (adding Slaughter Lane and/or William Cannon Blvd. to the group of “Smart Corridors”), and moving additional funding to the construction of sidewalks (especially on the Eastside).

The vote followed extensive public testimony for and against the proposal – several from advocacy organizations coalescing to support the bond – although most of those testifying criticized the package for one reason or another. With some variations, the objections broke roughly into three categories: 1) It’s insufficient to reduce traffic congestion (that is, automobile traffic); 2) It’s insufficient to improve mass transit (that is, it should include rail advocates’ proposal for an initial light rail line); 3) It should be broken out into multiple packages, to allow voters to pick and choose among various pieces and alternatives.

Council was unpersuaded on all scores – they’ve worked their way through most of these arguments, and compromised on most – and they held together as a group to pass the current version unanimously – subject to this week’s confirming third-reading vote. Mayor Adler followed Thursday’s vote with a statement: "The consensus we achieved tonight with unanimous approval of the ballot language for the Smart Corridor plan reflects the widespread support in the community to address traffic congestion, improve transit, increase safety, and build walkable neighborhoods. This sets up Austin for a big win.”