When Lexie Cooper was 20 years old she was raped by a man 15 years her senior. 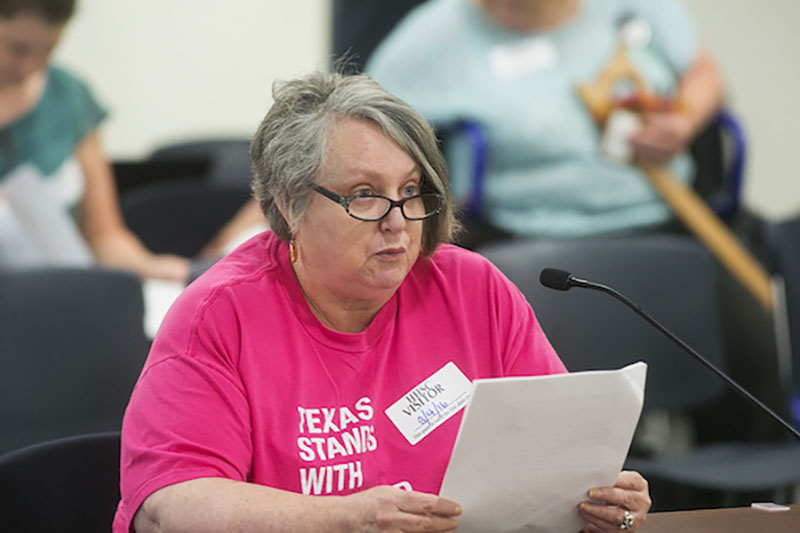 During an oftentimes emotional hearing at the Department of State Health Services on Thu, Aug. 4, about 90 speakers testified for or against a newly proposed rule that would require fetal tissue from abortion or miscarriages be cremated or buried. (By Jana Birchum)

The decision to get an abortion was difficult enough, but had she been forced to adhere to newly proposed state rules mandating her aborted fetus be cremated or buried, Cooper said the rape would have been further “traumatizing.”

“If I had to go through with [the abortion] and pay for what is basically a funeral for the remains of that pregnancy, it would have essentially been the state of Texas rubbing my face in my own rape,” said Cooper, an advocate with the Austin chapter of the National Organization for Women.

Cooper addressed a packed room at the Texas Department of State Health Services on Thu., Aug. 4. She and roughly 90 speakers, including health professionals, anti-choice activists, reproductive rights advocates, and women who've had an abortion or miscarriage, signed up to testify for or against the newly crafted DSHS rule to ensure fetal remains from abortions or miscarriages be either cremated or buried instead of deposited in sanitary sewers and medical-waste landfills. (Most abortion providers currently use a third-party waste-disposal service.) The anti-choice regulation, pushed by Gov. Greg Abbott, was quietly slipped into the Texas Register last month with little public notice.

The Texas Health and Human Services Commission contends the rule is meant to "ensure Texas law maintains the highest standards of human dignity,” despite the fact that no evidence suggests the current regulations, in place for more two decades, have been a problem. Anti-abortion speakers, often using loaded words and graphic imagery to describe fetal tissue disposal, echoed the state-backed sentiment, calling the current rules “inhumane.” Several speakers referred to the disposal services as “grinding up” or “shredding up,” and supplanted the word “fetus” for “pre-born child,” “baby,” or “dead baby bodies.” One testifier even claimed she was speaking “on behalf of Jesus Christ.”

“These babies deserve a burial or cremation. … They do not deserve incineration in bio-waste or a landfill or to be ground up," said Paula Moore, state board member with Concerned Women for America, a right-wing activist policy group. "What could justify this inhumane treatment of babies’ bodies?"

While HHSC is expected to approve the rule, that’s not enough for Abbott, who hopes it’ll become law during the next legislative session. Sen. Don Huffines, R-Dallas, and Rep. Mark Keough, R-Woodlands, testified to their support of the rule change, signaling they could be the ones to take up the bill in 2017. “Texas needs to update its practice to rightfully ensure every sacred human life is treated with the utmost care and respect,” said Keough, speaking on behalf of the Texas House Republican Caucus.

Joe Pojman, executive director of the Texas Alliance for Life, called on abortion providers to pick up the “nominal” fees associated with burials or cremations, which the state health commission confirmed would be the responsibility of the provider, not the state. But reproductive rights advocates argued that fee is likely not so nominal, and will surely fall on patients. Sarah Reeves of the Funeral Consumers Alliance of Texas opposed the rule, saying its economic impact statement was “incorrect,” as it has indicated there would be no significant increase in abortion-related costs. In a letter to DSHS, her group said basic funeral services cost $2,000, totaling an estimated $96 million annually for the state’s funeral business. As Amanda Williams of the Lilith Fund stressed, the rule would disproportionately burden low-income women already struggling to pay for care in a bruised abortion network.

Other pro-choice advocates pointed to the lack of evidence backing up the need for such regulations, the failure to provide any real health and safety improvement, and the state’s double standard, as the rule does not apply to any other tissue. It would have the effect of placing an undue burden on women and ultimately shaming them when it comes to their choice to terminate their pregnancy, they said. NARAL Pro-Choice Texas made note that they secured more than 1,100 comments opposing the measure.

“[They are] unnecessary health regulations that have the potential to put abortion out of reach for thousands of Texas women,” said Trisha Trigilio of the ACLU of Texas. “They are not imposed for any other human tissue or supported by any evidence suggesting a legitimate reason for treating miscarriages and abortion differently. In fact, Gov. Greg Abbott and Commissioner Smith have bragged about their ulterior motives. It’s disingenuous for this agency to continue to represent these regulations as advancing public health.”

Sound familiar? It should. As one testifier put it, the state’s claims for the rules are an “eerie” reminder of the ones used to uphold Texas' anti-choice omnibus law, House Bill 2. When the U.S. Supreme Court struck down two of its provisions in June, it made clear that states are not allowed to pass abortion-related laws without actual scientific evidence of their need. This rule, reproductive rights advocates say, is just that. The Center for Reproductive Rights, which led the successful legal charge against HB 2, penned a letter to DSHS, cautioning that the “sham” regulations would not withstand constitutional review. Similarly, the ACLU of Texas warned DSHS that Texas is once again “flouting” constitutional limits. Elsewhere, the rule has seen legal pushback: In June, a federal judge blocked a similar law in Indiana, writing that the “state’s asserted interest in treating fetal remains with the dignity of human remains is not legitimate given that the law does not recognize a fetus as a person.”

If it's evidence that the anti-choice camp needs to shield the rule from a constitutional challenge, it’s going to be an uphill battle. Carol Everett, founder of the anti-choice Heidi Group, delivered a wild hypothetical, bereft of medical science, during her testimony. Everett cautioned that a supposed sewer line that holds disposed fetal tissue could break down, exposing the public to the potential STDs and HIV in fetal remains. “What if one day something horrible escaped into the sewer system?,” she said, to hearty laughs from pro-choice advocates in the room. Her unfounded worry becomes a little less comical when you consider Everett sits on HHSC’s Women’s Health Advisory Committee, which advises the state agency on critical reproductive health issues.

DSHS spokesperson Carrie Williams said the department received more than 12,000 written comments, and will "carefully review and consider" each as its finalizes the rule, most likely before fall. The rule still needs to be approved by the HHSC executive commissioner and posted in the Texas Register; it would then be effective 20 days later.