While Kryston Skinner dreamed of starting a family one day, she knew it was not the right time for an early and unexpected pregnancy. 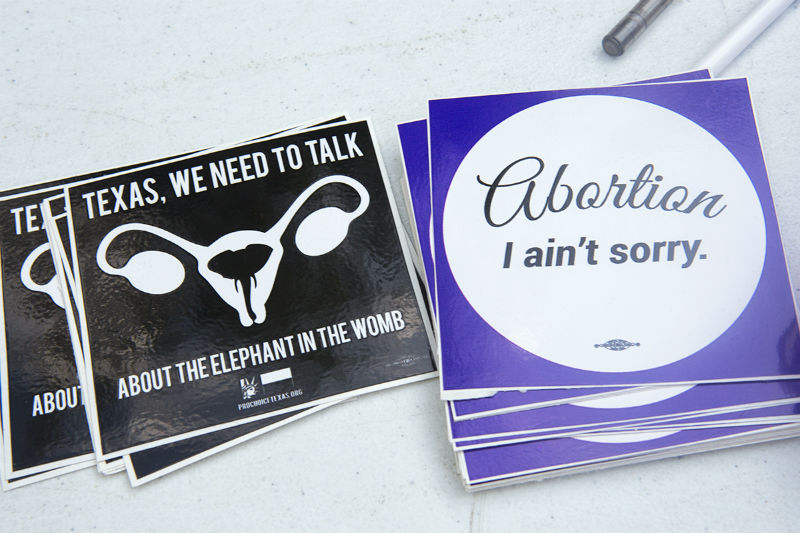 With little financial resources to raise a child at a young age, Skinner decided to undergo abortion. Before the procedure, her health provider was forced to hand her a state-mandated booklet riddled with medical mistruths, including the notion that women who have abortions are far less likely to become pregnant in the future.

During a Wednesday morning press conference outside the Department of State Health Services, Skinner said she learned firsthand the damage the state's “A Woman’s Right to Know” booklet could cause. “I believed the lies in the booklet,” she said.

Fearful of her chances to have a family in the future, Skinner had trouble holding still during the procedure. After it was done, she couldn’t leave her bed for three days and could barely eat. “My emotional distress was a direct result of the Woman’s Right to Know pamphlet. It made me so nervous about the possible impact that could result from abortion and made me feel more stigmatized,” said Skinner, who is now an organizer with the Texas Equal Access Fund. “I was even more afraid of what my community would think of my decision. It didn’t ultimately change my mind about my decision – it only made the experience traumatizing.”

The error-ridden pamphlet, created by a 2003 abortion informed consent law, has been criticized for years for its myriad of medical inaccuracies and biased, ideologically-motivated misinformation, such as linking abortion and breast cancer (debunked by the National Cancer Institute), and promoting the idea that abortion inflicts psychological trauma and suicide, which is not recognized by the American Psychological Association. Now, the already faulty booklet is seeing even more factual errors as it undergoes a round of revisions, the first since 2013, which the Chronicle previously reported. The new version includes a section on “fetal pain” – a condition backed by weak scientific evidence – and replaces medical terminology like “fetus” and “embryo” with “your baby.” A group of abortion advocates led by NARAL Pro-Choice Texas delivered nearly 5,000 comments denouncing the changes to the state health department on July 27.

Joining the group, Rep. Donna Howard, D-Austin, scrapped her pre-written intro during the conference for an impromptu apology: “On behalf of the state, I’m sorry. I’m sorry to Texas women for being forced to get information that’s inaccurate and certainly sorry for our physicians and health care providers for being put in the position of ignoring their medical training and medical knowledge to provide information that is misleading at best and false, as well.”

Calling the booklet a “propaganda piece,” Howard, vice chair of the bipartisan Texas House Women’s Health Caucus, vowed to propose legislation that seeks to rid the booklet of its many inaccuracies if DSHS fails to take the thousands of comments into account, as she has in past sessions. Howard tells the Chronicle that she would likely revisit bills she proposed in the 2015 session, including one provision that would allow doctors to exercise their medical judgment and be exempt from penalties (up to a $10,000 fine) associated with not distributing the booklet. “As a former nurse, I am outraged that the state requires health professionals to provide medically inaccurate information to their patients,” she said.

Eric Gonzales, one of those health professionals in training, spoke about the booklet’s invasion on the delicate physician-patient relationship. “There’s a trust and honesty that you will provide information for patients with complete autonomy and not try to manipulate or sway them in one direction or other based on your own personal beliefs,” said Gonzales, a UT Health Science Center San Antonio student and member of Medical Students for Choice. He contends the booklet’s bias and misleading passages corrupt this relationship. After dispensing the state-sponsored info, many providers feel the need to debunk the claims afterward so patients aren’t left with a false impression, which often ends up confusing them, said Gonzales.

DSHS spokesperson Carrie Williams told the Chronicle that the department will evaluate the comments they’ve received but don’t yet have a date set on when the finalized booklet will be published. “There is clearly interest in this draft booklet, and we need to be very thoughtful and diligent in reviewing the comments,” said Williams in an email response. “We’ll evaluate the feedback and make revisions as needed to make sure the booklet is clear and accurate for pregnant women.”

DSHS is accepting public comment on the revisions through this Friday, July 29, 2016, via email: wrtk@dshs.state.tx.us.