Craig Hutchinson shot and killed in his Round Rock backyard 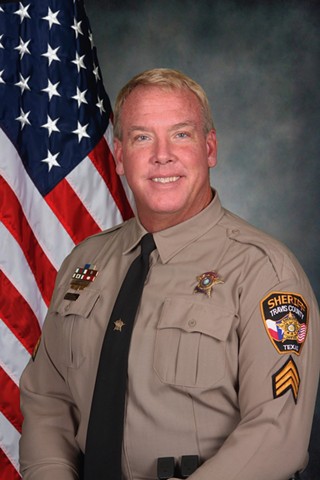 The Travis County Sheriff’s Office is reeling this morning as it begins to investigate the events that led to the shooting death of one of its own deputies. Sergeant Craig Hutchinson was found dead in his Round Rock backyard Monday morning after requesting backup from his own colleagues.

Hutchinson, a 32-year veteran of TCSO who was set to retire in early September, had just come off of a shift and was still in uniform back at his house early on Monday morning when he heard noises coming from a shed in his backyard. Suspecting a robbery, he called Round Rock’s emergency communication center asking for backup at 1:22am, saying then that he saw an undetermined number of people running through his backyard, according to Travis County Sheriff Greg Hamilton, who gave an address early Monday morning outside Hutchinson’s house on the 2000 block of Oak Meadow Drive. Officers from both Round Rock PD and the Travis County Sheriff’s Office arrived at Hutchinson’s house at 1:32am to find Hutchinson laying in the backyard of his home.

Hutchinson was taken to Round Rock Hospital and pronounced dead there. TCSO remains unclear about specifics, and has yet to report any information about potential suspects. The office has set up a tip line at 512/671-2767. Hamilton says that equipment has been removed from the shed in Hutchinson’s backyard.

Hamilton said he received a call shortly before 2am while he was at the Sheriff’s Association of Texas Training Conference and Expo in Grapevine, just north of Irving. He drove back to Travis County and got to Round Rock Hospital just as Hutchinson’s body was being transferred to the vehicle that would take him to the Medical Examiner’s Office on 12th and Sabine Street, where he was delivered shortly after 7am this morning. Hamilton, who was dressed in civilian clothes when he addressed a pool of reporters, said that he had known Hutchinson since 1985, and that the two worked in the jail Downtown together before Hutchinson went out on patrol.

This is the first death of a TCSO officer since the Sept. 2014 drowning of Deputy Jessica Hollis in Lake Austin. It is the first shooting-related death since Deputy Keith Ruiz, who was shot dead during the execution of a search warrant on Edwin Delamora’s home in Feb. 2001.

“I know you’ve got questions right now, but I don’t have answers,” said Hamilton. “It would be a waste of time to sit here and try to address your questions. We are going to get information. As soon as we get it, we will get back with you.”

For more on Hutchinson’s death, see this week’s Chronicle issue. 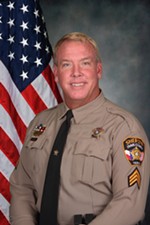