Texas senator tosses matches (and himself) on RNC dumpster fire It's rare – no, scratch that – it's unprecedented that Sen. Ted Cruz would get a standing ovation from Democrats. But when boos rained down as he refused to endorse GOP presidential nominee Donald Trump at the Republican National Convention in Cleveland, it's hard not to imagine at least scarcely stifled giggles.

Of course, everyone watching the celebration of Trump was waiting for the moment when somebody, anybody stood on the podium, patted their sweating brow, stared across the Quicken Loans Arena, and asked the assembled crowd, "Are you nuts?"

Did anyone expect it to be Cruz? After all, he has a reputation for being the superstar rabble rouser, as shown by his scene-stealing turn at the Texas GOP victory party in 2014. Maybe that's what Trump's team expected when they booked him as a prime time speaker during the convention.

They really should have known better. So now they're contending with photos of the Trump family enraged, wild finger-pointing, and the indelible image of Republican loyalists booing one of their own senior elected officials for saying they should vote their conscience.

It was already a car crash of a convention. Constant photos of an empty room for the Women for Trump press event, mirroring empty seats on the convention floor. Two Trump children being accused of plagiarism on speeches their father claimed they wrote, and then speechwriters being wheeled out to take the fall. Trump emerging from smoke (looking, depending on who you ask, either like Beyoncé, Drake, the Undertaker, or Satan in John Carpenter's Prince of Darkness). Right-wing talking head Laura Ingraham seemingly giving him the ol' straight arm heil.

Clearly, it was up to Cruz – one of the last men standing in the primary race, and one of the last to concede defeat – to put at least a little polish on this turd. Or, failing that, to at least throw enough red meat around to placate/rile up the crowd.

It seemed to be going well. The bulk of the early half of his speech was about Officer Michael Smith, one of the five members of Dallas law enforcement gunned down two weeks ago. Then he threw in the mandatory Benghazi and ISIS references, slammed the IRS and Democratic immigration policy, and even got another dig in on net neutrality (a personal bug bear of his that doesn't play well with the people that actually understand it.)

Next he set about listing all the victories of the Republican party: ending slavery (historically accurate), repealing Jim Crow laws (urm … ), putting humans on the Moon (wasn't that JFK?).

And then came those 82 words that changed the night:

We deserve leaders who stand for principle, who unite us all behind shared values, who cast aside anger for love. That is the standard we should expect from everybody. And, to those listening, please don’t stay home in November.

If you love our country, and love our children as much as you do, stand, and speak, and vote your conscience, vote for candidates up and down the ticket who you trust to defend our freedom, and to be faithful to the Constitution.

Of course, there were little clues that he was going off-script. Like saying that Muslims and atheists have the right to religious freedom, that gays are protected by the Bill of Rights, and mentioning Alton Sterling and the victims of the Charleston-Emanuel AME Church massacre.

But what was his game plan? Was it just to derail the Donald? Was it to strike back at the man who accused his father of being part of the plot to kill JFK, and tweeted a far-from-flattering picture of his wife like it was a policy statement? Well, that's definitely part of it. This morning, Cruz defended his non-endorsement to the Texas delegation in Cleveland, telling them: "I am not in the habit of supporting people who attack my wife and attack my father."

Or was it to set himself up as the less-extreme option for 2020, when the GOP is expected to stagger, blinking, into an election against an incumbent Clinton?

If so, he was in for a rude awakening. The CNN report of the backstage situation after his speech is eye-opening. While GOP leadership tried to spin that, for Republicans, voting your conscience means voting Trump, no one seemed convinced that Cruz's words were anything other than a snub. He was reportedly disinvited from the suite of GOP sugardaddy Sheldon Adelson (who he would need on board in 2020, if he has aspirations for the presidency, and maybe in 2018, if he wants to keep his U.S. Senate seat). There were even reports that he had to be physically separated from big-money donors.

And the big question: Was Cruz given the go-ahead to dive-bomb the nominee? David Shuster reported that RNC sources were telling him that Cruz gave them a different version of the speech in advance: but then, as has been the story of the week, Trump went against the party line. He took to Twitter to claim that he'd seen exactly the speech as delivered beforehand and didn't care. 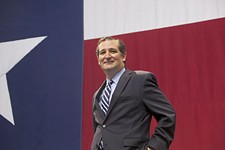