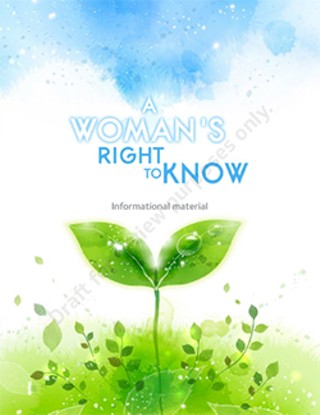 The Department of State Health Services replaces mentions of fetus or embryo with "your baby" in new draft of its "Women's Right to Know" booklet, given to abortion-seeking patients. (Source: DSHS)

Leave it up to Texas officials to pump even more factual inaccuracies into already factually flawed literature. (Need we remind you of the state’s social studies textbooks?)

The Department of State Health Services has updated an error-ridden booklet, required by law to be given to women seeking abortion, to include even more medical mistruths. Ironically titled “A Woman’s Right to Know” the pamphlet contains images of the fetus at different levels of gestation and details the many supposed dangers of abortion, including the false link between abortion and breast cancer, a notion long discredited by the National Cancer Institute and other medical authorities. It also promotes the idea that abortion causes psychological trauma to women (or “post-abortion stress syndrome,” a condition not recognized by the American Psychological Association). And the booklet intermingles anti-choice crisis pregnancy centers around town, nonmedical faux clinics tasked with dissuading women from undergoing abortion, with medical clinics in a list of resources where abortion-seeking women can go for assistance. (You’ll be hard pressed not to find a trove of the medically misleading literature at CPCs.) While CPCs proudly dispense the false knowledge, the state forces medical professionals and licensed health providers to hand the booklet to women considering abortion.

The pamphlet was created in 2003 as part of the state’s informed-consent-to-abortion law, and subsequent legislative attempts – supported by the American College of Obstetricians and Gynecologists, the Texas Medical Association, and the Texas Hospital Association – to correct the language have failed session after session. Rep. Jessica Farrar, D-Houston, and local Rep. Donna Howard, D-Austin, co-authored a bill in the 2015 session that would ensure the booklet info is supported by research recognized as “medically accurate, objective, and complete by the National Institutes of Health and affiliated organizations.” That bill was left pending in committee.

More than 35% of Texas’ informed consent booklet is made up of medical inaccuracies, a panel of experts in human anatomy led by a research team at Rutgers University found. They also found that nearly 50% of the information about first trimester abortion is scientifically incorrect or misleading. Texas ranked fourth in highest number of inaccuracies when compared with other state-mandated booklets.

Further exacerbating the problem, the new draft proposed by DSHS includes additional factual inaccuracies. Among them is an added section on fetal pain, the basis for Texas’ 2013 law that banned abortion at 20 weeks. “We know that babies develop the ability to feel pain while in the womb. In consideration of the potential for fetal pain, Texas law currently limits abortion to under 20 weeks,” the draft reads. However, that’s faulty science: A 2005 Journal of the American Medical Association paper didn’t find substantial evidence to support the claim. Another gem: Stunningly, the new booklet plucks anti-choice language to refer to the fetus or embryo. Instead of medical terminology, the state-sponsored book uses “unborn child” and “your baby” when describing gestation development, as early as four weeks.

The good news for those who aren’t fans of ideologically-driven pseudoscience is that you can voice your comments and opinions straight to the health department. Comments should be emailed to WRTK@dshs.state.tx.us by Friday, July 29. A network of abortion assistance organizations and progressive activist groups, including NARAL Pro-Choice Texas, Texas Equal Access Fund, Shift, and Progress Texas, penned a letter to DSHS that lists out the numerous inaccuracies, requests scientifically sound revisions as well as a public hearing on the issue. Citizens can send that letter in their name here.