APD will be at 100% staffing patrol through August

The officers’ lives were taken during a deadly ambush, which occurred at the end of a peaceful protest centered around publicly criticized deaths of Alton Sterling and Philando Castile at the hands of the police. Military veteran Micah Johnson – who perished via police robotic bomb detention – has been identified as the sole shooter. 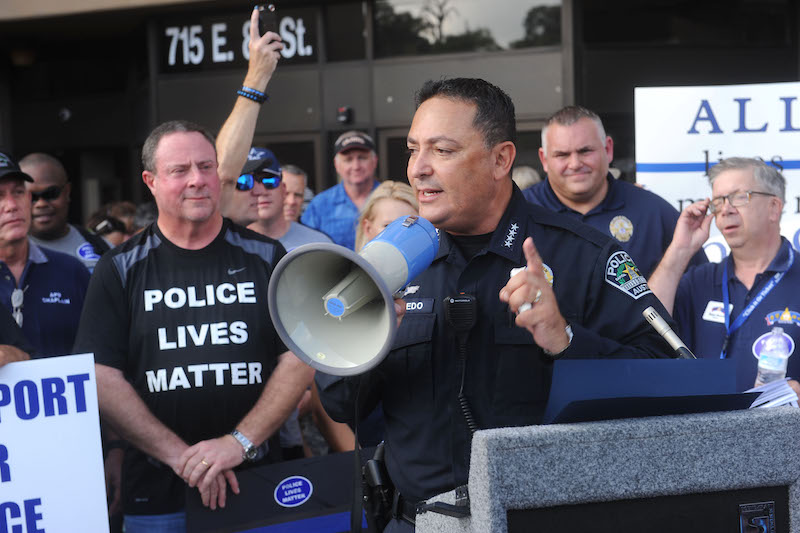 Acevedo sent condolences to the Dallas Police Department, expressed confidence in the pre-eminence of modern-day policing, and even evoked the names of Martin Luther King and Mahatma Gandhi.

Acevedo disclosed that the department will be at 100% staffing on patrol, with required overtime, at least through the months of July and August. He justified the commitment of force, citing current rises in crime and previous criminology reporting concerning upticks in violent crime during summer months.

The chief spoke with definition and fidelity, looking to hammer home some specific points regarding police and public accountability. “We need to hold bad people accountable, whether they are bad people in society, or bad [policemen]. We all have an absolute responsibility to hold people accountable. Just as important is [to lift] up good people and lift up each other.” Citing citizens attempting to stretch their First Amendment rights, Acevedo tersely cautioned against anti-police messaging, which could be interpreted as threats toward the department. “Beware,” he explained. “In the state of Texas, there's some laws you may be breaking.”

“Those of you that are celebrating the death of five law enforcement peace officers, shame on you,” he said, chastising some who took to Twitter and Facebook to praise the shooter. He said he understood the antagonism, and that “we have some instances in this nation where police officers fall short.” He asked citizens to remember that “these five officers that gave their lives yesterday, they had nothing to do with Minnesota. [They] had nothing to do with Baton Rouge.”

Acevedo doubled down, suggesting public resentment should be spread around. “Quite frankly, a lot of that disenfranchisement and anger in society is placed at footsteps of police officers,” he explained. “A lot of the ills impacting this nation has very little to do with police, and a lot to do with a lot of other issues that we face, and we don't control.”

Audibly disturbed, the chief’s tone turned, while expressing his deep disappointment in what he calls “ugly, un-American rhetoric, where we're painting people with a very broad brush. We're painting police officers, because they wear a uniform, as a bunch of thugs. A bunch of brutes. A bunch of racists."

He further attempted to pitch a counter to the anti-police sentiment, calling this current generation of police officers the best in the United States’ history, in spite of vastly increased media scrutiny and public pressure. "The truth remains that there are 800,000 police officers in this country, a vast majority of which will never shoot anybody, never kill anybody, will never seriously injure anybody, and will serve with honor, distinction, and respect over a 25- to 30-year career.”

Channeling the names of King and Gandhi, cultural icons and civil rights leaders – “These are men that changed the world, without ever firing a shot” – the chief emphatically called for more positive dialogue, as well as increased understanding between the police and the public they serve.

“[We] need to stop painting people of color as criminals, or people coming across the border as rapists. Start talking with each other. [We must] stop having these ugly discussions with one another, [or] we will have incidents like this, and other tragedies involving law enforcement.”