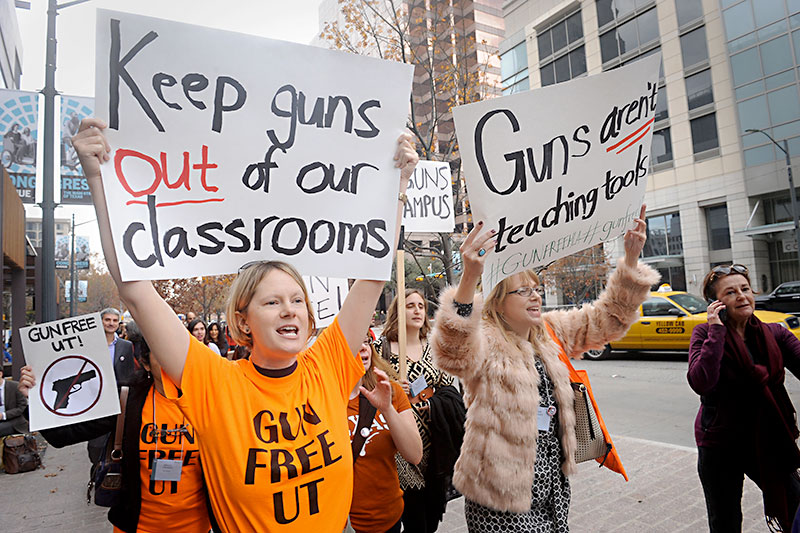 On Aug. 1, five decades to the day after Charles Whitman killed 14 people on the UT campus and injured 32 more, campus carry comes into effect in Texas public universities. That is, unless three UT lecturers have anything to say about it, having filed a request for a federal injunction allowing gun free classrooms.

The suit, filed in the U.S. District Court for the Western District of Texas, has been brought by three staff members: Professor of Sociology Jennifer Glass, Professor of English Lisa Moore, and Associate Professor of English Mia Carter. In it, they cite Texas Attorney General Ken Paxton, UT-Austin President Gregory Fenves, and the UT Board of Regents as defendants.

In the complaint, the three educators take a stance against what they call "the overly-solicitous, dangerously-experimental gun policies of the Texas Legislature and the insufficiently protective policies of UT-Austin’s President." Claiming that the rules as proposed violate the First, Second, and Fourteenth Amendments, they request an injunction to take effect before classes begin again on Aug. 24.

The three are not alone in their opposition. Last October, 800 UT professors and 1,000 UT grad students signed a petition opposing campous carry. Nobel Prize-winning lecturer Steven Weinberg has already said that he will make his course gun-free, and is willing to be prosecuted over it. Economics Professor Emeritus Daniel Hamermesh resigned rather than work with firearms in the academic mix, as did Dean of Architecture Fritz Steiner. On top of that, University of Virginia professor of Media Studies Siva Vaidhyanathan withdrew his application to become dean of the Moody College of Communications, and cited campus carry as the reason.

The issue at stake is the implementation of Senate Bill 11, passed last legislative session over the protests of most academics and university administrators. Fenves himself has stated opposition to the idea of allowing concealed firearms on university campus, as has UT System Chancellor and former admiral William McRaven.

However, in February, Fenves submitted his draft policy recommendations to McRaven on how UT could come into compliance with the new law. At the time, he wrote, "As a professor, I understand the deep concerns raised by so many. However, as president, I have an obligation to uphold the law."

Since the implementation was seemingly finalized, the more conservative-leaning UT regents have indicated they may revise Fenves' rules, potentially removing some of the restrictions and requirements he drafted. There has even been discussion of implementing a single statewide standard across all public campuses, rather than allowing individual presidents to allow localized interpretation of the law to fit their own schools.

The suit's claims of First and Fourteenth Amendment violations are to be expected, and all the three lecturers cite particular concerns in their classrooms. Glass teaches a class on reproduction, which touches on abortion issues. Similarly, Moore teaches a class entitled "LGBT Literature and Culture." Carter's class focuses on critiquing one's own belief structure. All three contend that having guns in the room would have a chilling effect on how students will express themselves, and damage the purpose of the class.

However, the claim on the Second may be the most interesting, with potentially the most far-reaching effects. Calling handgun regulation in Texas and across the U.S. "notoriously weak and inefficient, with gaping loopholes," the trio argue that the consequence is that, in Texas, the carrying of handguns is not “well-regulated” within the meaning of the Second Amendment because there has not been the imposition of proper discipline and training."