“The law was litigated for three years and in that time, we saw a lot of damage,” said Rebecca Robertson, legal policy director with the ACLU of Texas, during a Monday afternoon press conference held inside ChoiceWorks on I-35 North in Austin, the site of the former Whole Woman’s Health flagship clinic, forced to shut down due to Texas’ House Bill 2. “Some of those clinics are likely not coming back. It sometimes takes years to rebuild access that we had before.” 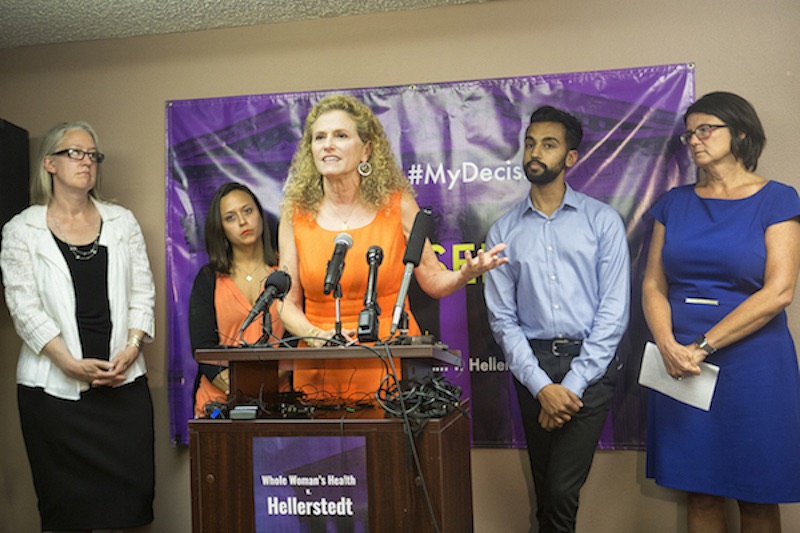 During a Monday afternoon press conference, Rep. Donna Howard, D-Austin, says she and other Democratic lawmakers will fight against new anti-choice bills that could creep up next session. (photo by Jana Birchum)

Dr. Bhavik Kumar, an abortion physician with Whole Woman’s Health, pointed to the complicated logistics like re-hiring laid-off staff, re-licensing the facility, and securing lost leases; Kumar said he didn’t know of any clinics with plans to reopen soon. HB 2 has led to the closure of more than half of the state’s clinics – from 41 to 19. Amy Hagstrom Miller, lead plaintiff and head of Whole Woman’s Health, reiterated her excitement but also caution in a statement: "Today’s decision marks a turnaround for Texas and for our country, but let me be clear: This win doesn’t mean the struggle is over. We have a daunting task ahead of us to determine whether and how we can reopen our health centers that were forced to shut their doors over the past several years … this decision only addressed two of the many, many restrictions women face to get abortion care in Texas.”

Amanda Williams, executive director of abortion assistance group the Lilith Fund, said that while the SCOTUS ruling was a positive step in the right direction, research shows HB 2 has inflicted “irreversible damage.” It’s important to remember Texas still continues to suffer from a deep funding gap for abortion services, meaning many low-income women continue to see abortion out of reach due to the impact of HB 2 and prior state laws still in effect, said Williams.

While anti-choice Texas Lt. Gov. Dan Patrick held his own presser in Houston to denounce the high court opinion and renew a call to further legislate reproductive rights in the upcoming 2017 session, local Rep. Donna Howard, D-Austin, talked about ways to expand family planning services. Howard proposed allowing for 12-month supplies of birth control pills, wider access to implants and IUDs, and providing a contraceptive benefit through the Children's Health Insurance Program (CHIP). Calling the basis of HB 2 “disingenuous and outright untrue,” Howard said the high court reaffirmed what many Texans knew all along: The law was never about the safety of women but about blocking constitutionally protected health care due to politics.

"This statement from the Supreme Court is a powerful indicator that we need to stop fighting a battle which was decided in Roe v. Wade more than 40 years ago,” said Howard. "Moving forward, Texas lawmakers should refrain from pushing medically unnecessary policies which erect barriers to a safe and legal medical procedure. If they do, it is now crystal clear that the courts – and the public – will forcefully stand in their way.”

"We are going to work to make sure that anything comes before us will be defeated by courts, if not by us in the Texas Legislature,” she said.