It was a full and enthusiastic house Saturday afternoon at Vivo restaurant for the official kickoff of District 4 Council Member Greg Casar’s campaign for re-election. Former mayor Gus Garcia sang Casar’s praises, as did U.S. Rep. Lloyd Doggett – fresh from the “Sit Down to Stand Up” gun legislation demonstration in the U.S. House. 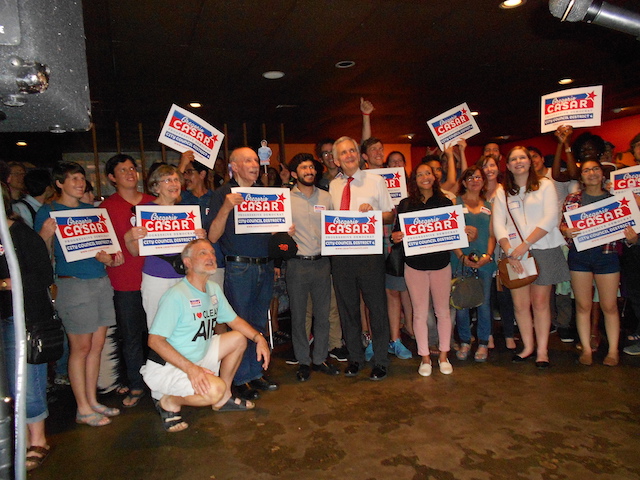 Supporter Amanda Lewis began by noting that she has watched Casar from the beginning and can report that he has been diligent and responsive from his first day in office. She was followed by Garcia, who said, “I”m always glad when we elect a good council member. And in this case, we’ve elected a great council member.” That was the general tone of the event, with Garcia and then Doggett citing Casar’s work for fair chance hiring, livable wages, and affordable housing as hallmarks of the young council member’s tenure thus far. Doggett recalled Casar’s prior service as an organizer and spokesman for Workers Defense Project as a preparation and augury for how he has performed as a council member. “Greg was serving our community,” said Doggett, "before a vote was ever cast.”

Casar thanked the crowd for their support, and encouraged them to get engaged in the campaign and more generally, the ongoing work of his office. When he first took office, he was concerned that he “needed to figure out how to do this” on his own, but he quickly learned that with support and activism of his constituents, “the work got done.” (Casar hasn’t yet drawn an opponent, although former challenger Laura Pressley continues to pursue on appeal a lawsuit over his 2014 election.) Casar noted the “serious challenges” facing Austin, and concluded, “Our district is the future of the city. There are so many challenges, but so many opportunities … I’m committed to do more, but I really need y’all’s help.”

Running for re-election in November, in addition to Casar, are D2 CM Delia Garza, D6 CM Don Zimmerman, D7 CM Leslie Pool, and D10 CM Sheri Gallo. Those are the five incumbents who drew lots signifying two-year terms following the 2014 election, eligible for four-year terms beginning January 2017. Jimmy Flannigan is campaigning against Zimmerman, and Garza and Pool have recently drawn challengers, but thus far no one has declared against Casar or Gallo.

The event had a celebratory air, with numerous supporters chatting up the council member and requesting selfies with the candidate. Afterward, Casar talked with the Chronicle about current council business, in particular the $720 million transportation bond proposal tentatively approved last Thursday. “I supported the proposal,” Casar said, although he had worked for some changes in specific allocations. “We need to start being bold about doing major projects, where not doing them is holding us back. As I said on the dais, Seattle did almost a billion dollars in transportation, and then $300 million in affordable housing. Our needs are much greater, because we’re a bigger city. So long-term, I think we need to get accustomed to campaigning for, building coalitions for, and having the boldness to do that size of bond.”

Doggett, who had arrived at the Casar event after attending an Eastside memorial service for local historian and activist Danny Camacho, talked afterward about the historic House sit-down led by Georgia Congressman John Lewis. While he noted that the “gun safety” legislation proposed by the Democrats is “modest” in intent, he said that the Orlando massacre had motivated some action to try to break the logjam on gun legislation.

“Many people don’t realize that we can’t consider a bill or even an amendment without the approval of the Speaker [Paul Ryan],” Doggett said, and Ryan is afraid to allow bills that might force difficult votes for Republican members. “John Lewis conceived this idea – to which he brings such incredible moral authority – of using the sit-in. What’s different about this and a somewhat similar event I participated in with him during the Gingrich era, is technology. … There was no way to get that message out. Now, with Periscope and Facebook, people could watch almost as though they were watching it on C-Span. That helped unite those of us on the floor with people around the country.” A few Republican members have now filed their own bill – “not as comprehensive as I would like it, but it’s a really important step, to make some incremental progress in forcing some action.”

The two bills for which Democrats are demanding votes include one that would deny gun purchases to people on the “no-fly list," and expanded background checks for gun purchases. Doggett said he is aware of criticism by civil libertarians that the no-fly list includes many people in error, but he argues, “There are problems with the no-fly list, but there are ways to set up legitimate processes for people to get themselves off the no-fly list. That ought to be there anyway, so people won’t have problems over flying. That’s a process that needs to occur,” he continued. “But if you’re on the list, you don’t get to purchase all the guns you want without determining whether you belong on that list. It’s about the ready access to weapons of people who are too dangerous to fly.“ He continued, “There are other things that need to be done, but this is a really good step, if we’re going to make headway on any of this.”

Doggett pointed to the National Day of Action for Gun Safety scheduled Wednesday to spread and amplify the message of the sit-in. (Austinites will be gathering Wednesday evening at the AFL-CIO Labor Temple to take part in the event: 1106 Lavaca, 5pm.) Asked if he thought substantial change is possible, Doggett answered: “This is not a battle, or a struggle, that we will win in one week or one month. We may get some modest incremental change; we may get no change at all right now. We have to keep pushing, we have to get some accountability, and hopefully, in a new administration, we get more comprehensive gun safety legislation.” 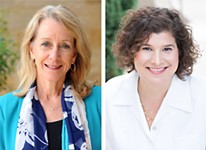