Texas Lt. Gov. Dan Patrick has built his political career on outrageous religious bombast. But a tweet this morning – at best misguided, at worst unconscionable – has brought down the hellfire of public opinion in the wake of the Orlando club shooting.

As Florida law enforcement were still trying to get a body count of the victims at the Pulse nightclub, it was becoming increasingly clear that the killer, named as Omar Mateen, targeted the gay club because of his homophobia.

So of course jaws dropped when professional homophobe Patrick tweeted this, six hours after the massacre: Even for the former senator who thought his first order of duty in the Texas Legislature was getting "In God We Trust" carved into the Senate chamber wall, this seemed an Old Testament reference too much. It also raised shades of December, when Patrick tweeted what seemed to be an endorsement of the San Bernardino shooter, but was actually a ham-fisted assault on the New York Daily News.

As the inevitable criticism came in thick and fast, Patrick's team released a statement saying that the post was part of his normal Sunday morning cycle of biblical quotations. The statement said it was actually scheduled last Thursday and that "we regret the unfortunate timing of these posts and ask everyone to join us in praying for the people of Orlando in this awful time."

What's interesting about the statement is that the point of contact was not Patrick's press team, but Allen Blakemore, of Houston-based political strategists Blakemore and Associates.

The implication is that Blakemore (who Patrick clearly has on speed dial) had been brought in to run some kind of damage control. However, the damage has already been done, and it's not really about Patrick's response to the Orlando shooting. It's that Texans (including the multiple people that liked the original post) think that this is exactly the kind of tweet that Patrick would send out in the aftermath of a mass shooting of gay people.

Moreover, if it was scheduled on Thursday, then his staff were planning to put this tweet out while Patrick was making national headlines for opposing gender-neutral bathrooms.

So Blakemore is left defending an officeholder who is a) a longstanding proponent of religiously-inspired intolerance and b) really bad at social media. Which is probably easier than trying to defend Rep. Drew Springer, R-Muenster, who seemed to believe the worst mass shooting in U.S. history would have been avoided if everyone in a darkened club had been carrying guns. 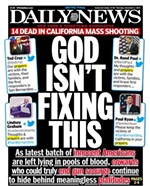