Down to the Last Pitch

Thursday afternoon, Austin Mayor Steve Adler joined six mayors from around the country delivering the final “pitch” in the competition for the Smart City Challenge grant – $40 million from the U.S. Department of Transportation, $10 million from Vulcan Technologies – to enable technological innovation in local transportation programs. 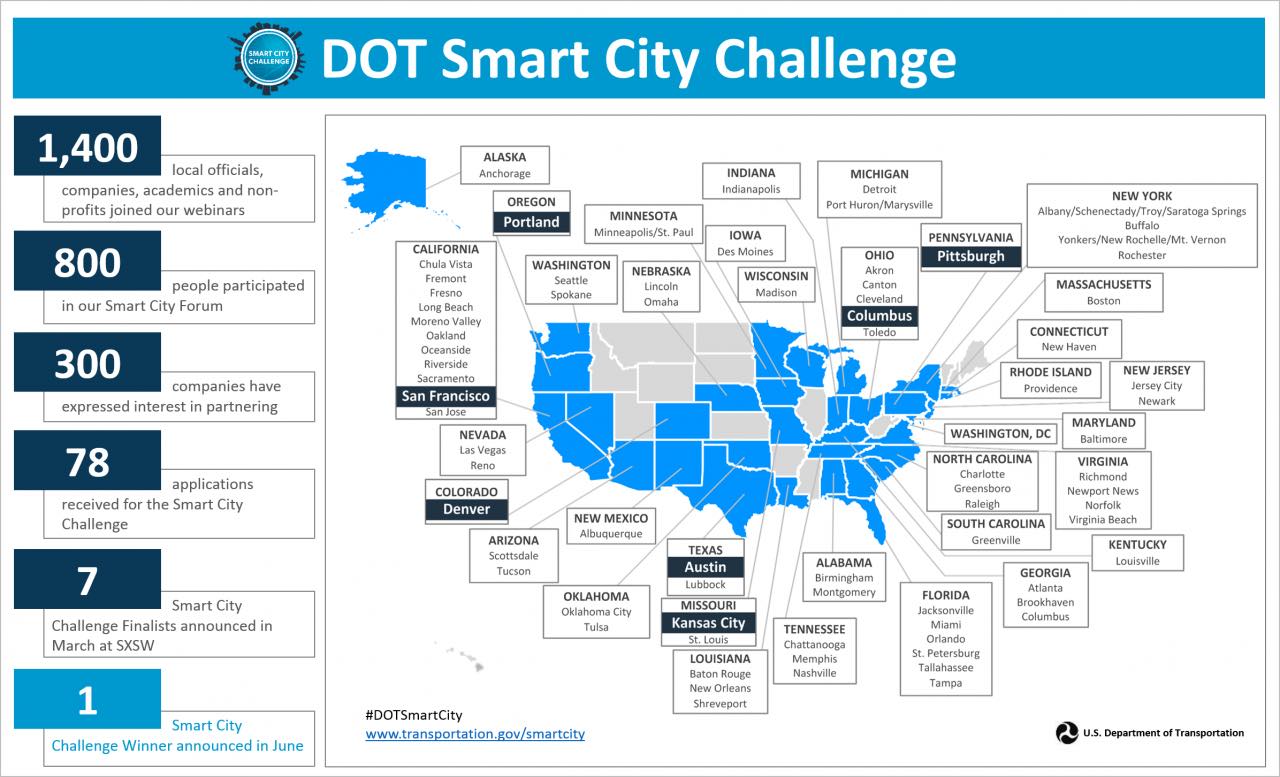 In an event (streamed online from the U.S. DOT website) that was part mini-debate, part sideshow, seven mayors delivered what was the final attempt to persuade the agency to favor their cities. The brief pitches – all introduced by short film clips heavy on techno-bells and whistles and inspirational music – emphasized both the technological and social aspects of the various projects to be underwritten by the grant, with a specific attention to “equity” issues raised by local transportation challenges.

That note was first struck by U.S. Secretary of Transportation Anthony Foxx, who summarized the transportation infrastructure problems created by population growth and said the agency was particularly concerned that the “smart city” projects – the term used to suggest programs using new technologies to amplify traditional transportation improvements – “include everybody.” He added that the grant challenge is in fact an attempt to provide a better answer to the question, “What is a Smart City?”

The seven mayors representing the finalists in the challenge provided the icing on the cake of months of municipal work and reams of materials already provided to the agency. In order today, the pitches came from San Francisco (Mayor Ed Lee), Austin (Adler), Portland (Charlie Hales), Kansas City (Sly James), Denver (Michael Hancock), Pittsburgh (William Peduto), and Columbus, Ohio (Andrew Ginther). The seven cities had been chosen from 78 municipal applicants, and Foxx noted that the original plan was to select only five finalists, but the quality of seven applications prevailed in the end.

Austin’s film clip featured both longtime residents facing daily transportation challenges and tech innovators (Joseph Kopser of RideScout) collaborating on solutions. In his presentation, Adler noted the city’s extensive public outreach in preparing its application and argued that the eventually designated city should exhibit three elements: 1) that it “recognizes and owns” the particular challenges facing it; 2) that it exhibit the social and cultural “capacity” to address those challenges; and 3) that it prepare a “breadth of response” to those challenges.

The mayor noted while Austin is in many ways “a magical city,” it carries a history of racial and economic segregation as a particular burden in addressing inequities (noting the 1928 Master Plan that formalized East/West segregation, as well as the recent national study reflecting deep economic segregation). He said Austin is pushing back against that history and has a cultural and technical culture of innovation, where “ideas move into action.” Austin’s challenge application, he continued, exemplifies “multifaceted” solutions to its central problems of transportation, affordability, and equity.

Even slipping in a brief sub-pitch for a transportation bond package for November, Adler concluded, “Your challenge has come at exactly the right time and exactly addressing what the priority is in our city. I think that if you'll partner with the city of Austin, we can deliver to you the Smart City that you have been looking to find.”

More material on Austin’s application is available on the city’s Transportation Department website and on the whole challenge on the U.S. DOT site. The decision on a winning city is expected sometime this month.