A visiting Scot takes us back in time

A warp opened up on the Internet earlier this week, a portal to an exotic yet familiar time and place – Austin, 20 years ago. The video, uploaded by Austin attorney Pete Reid, is a car ride down the streets of Austin in June 1996, narrated by Reid and another then-fellow Scottish UT student referred to as “Young Brian.”

Beginning on the Drag and crossing over the First Street Bridge before cutting off, the trip has the duo narrating their time at such legendary haunts as the Hole in the Wall (where he allegedly met Michael Stipe), Liberty Lunch (where he saw Blur, Garbage, and Terence Trent D’Arby), and Tower Records (where a new Metallica record had just arrived). Those longing for the Austin of yore will undoubtedly enjoy this view of a city with a skyline that’s more sky than line and with a distinct lack of bumper-to-bumper traffic on a Sunday afternoon. 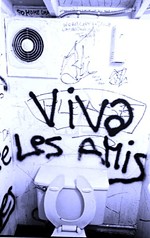