The Association of Alternative Newsmedia announced today its 2016 AAN Awards Finalists, including two nominations for The Austin Chronicle, for excellence in column writing and cover design.

Creative Director Jason Stout, recognized for his outstanding work on the covers below, is one of four finalists in the Cover Design category (circulation 45,000 & over).

Staff writer Kevin Curtin is a finalist in the Column category (circulation 45,000 & over), for his weekly music column, "Playback". He earned the nom for "Five Nights on Dirty Sixth," "Agents of Change: Downtown Clubs vs. Downtown Hotels," and "The FAQs of Austin Music 2015."

Additionally, Austin resident Jen Sorensen, whose Jen Sorensen Comics strip is syndicated nationally and in The Austin Chronicle, was recognized in the Cartoon category.

The year’s AAN Awards nominees were culled from a field of 821 entries, submitted by 70 alternative publications across the U.S. and Canada. Judging was conducted by the Philip Merrill College of Journalism at the University of Maryland. Winners will be announced at the annual conference, hosted this year by The Austin Chronicle July 7-9 in Downtown Austin. 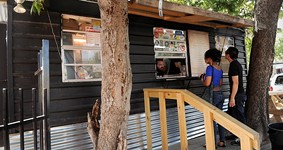