Parents of transgender students speak out against Patrick 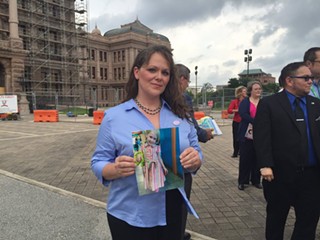 Kimberly Shappley holds up a photo of her transgender child. Shappley and other parents are calling on state officials to stop their anti-LGBTQ rhetoric. (Photo by Mary Tuma)

The anti-trans fervor in Texas isn’t slowing down.

This morning, Lt. Gov. Dan Patrick – who has led the charge against Ft. Worth ISD for its transgender inclusive policies – announced the next steps in his crusade against transgender rights. Patrick is requesting a legal opinion from fellow anti-LGBTQ state official Attorney General Ken Paxton to see if the ISD’s guidelines, which allow transgender students to use the restroom facility that corresponds to their gender identity, are illegal and whether or not Superintendent Kent Scribner had the authority to adopt the policy. Patrick signaled he and other lawmakers would delve into the transgender restroom issue during the next legislative session (but in what capacity is unclear). "When we have a rogue, runaway superintendent, and a rogue, runaway school board, then the Legislature this session will have to look at this issue," said Patrick during a Tuesday morning Capitol press conference. “… This fight is just beginning.”

Additionally, the lite guv plans to send a letter to Texas ISDs urging them to ignore the Obama administration’s recent directive for school districts nationwide to promote transgender inclusive guidelines. Earlier this month, he vowed to forgo billions in federal education funds in exchange for disobeying the feds. Today, he reiterated the state will not be “blackmailed” by Obama. Adding fuel to the fire, last week AG Paxton, along with 10 other states, filed suit to challenge the federal administration’s LGBTQ-friendly instruction.

The Chronicle asked Patrick if he believes transgender students deserve equal rights. In an answer underscoring his ignorance (willful or otherwise) about gender identity, Patrick said, “Transgender students deserve the rights of everyone else, but that does not mean they have the right to use the girls' room if they’re a boy.” The Chronicle followed up by asking Patrick if he personally knew any transgender residents. He admitted to not knowing any transgender people on a “personal basis.”

Outside the Capitol, LGBTQ allies and four parents of transgender youth responded to Patrick with their own heartfelt, intimate stories of struggles their children faced – including tantrums, depression, bullying, and thoughts of suicide and death – during a counter press conference, hosted by advocacy group Equality Texas. With candor, they also revealed overcoming their own prejudices and confusion about gender questioning. Holding up pictures of their children, they accused state officials like Patrick of stoking anti-trans hatred with dangerous rhetoric that places their vulnerable children in greater harm. One mother slammed the state for using transgender children like hers in a “literal pissing contest” and as pawns in a political game.

“We are private people. We are lifelong Republicans, and we are Christian. We only want to protect our daughter and live quietly. We did not want to speak out publicly, but the lieutenant governor has forced us out of our private lives and into the public arena to protect our daughter,” said Kimberly Shappley, mother of a 5-year-old transgender child, born a boy named Joseph Paul, and who now identifies as her daughter, Kai. “I want Texans to look at my little girl’s photo. Do we as a state really want to force her to go into the boys' bathroom? Why are we targeting innocent children for political games? I urge Lt. Governor Patrick and other leaders to sit down with me and families like mine and educate themselves about transgender children.”

Echoing Shappley’s frustration, Ann Elder, the mother of an adopted transgender child named Benjamin, said the state-level aggression is creating a hostile environment for her son and others like him. “I'm here to tell you, Dan Patrick: You are endangering my child's life. Because you have now told everyone in the state of Texas that it's okay to harass my child and that it's okay for the school district to stop supporting them."

Equality Texas board chairman Steve Rudner argued Patrick’s legal questions to Paxton aren’t necessary – while Patrick takes issue with the guideline that allows transgender identity to be kept private between school employees and students, Rudner says that’s already law. Students are afforded similar privacy protections when it comes to domestic abuse, for instance. And with high rates of LGBTQ children kicked out of their homes due to bigotry from families, the protection is a humane and important one. Rudner also refuted Patrick’s insistence that the rules were pushed through by a “rogue” superintendent. A local, democratically elected school board adopted the policies in 2011; Superintendent Scribner merely instituted guidelines for the pre-existing policy that had been adopted in accordance with laws and regulations, he said.

Considering Patrick has yet to meet a transgender resident (but remains comfortable dictating their rights), the parents of transgender children made a point to extend an open invitation to meet with Patrick and state officials so they could learn about the lived experiences of transgender children and make them understand why the restroom debate should be put to rest. However, something tells us Patrick and his anti-LGBTQ allies are more likely to flush the invitation down the toilet.