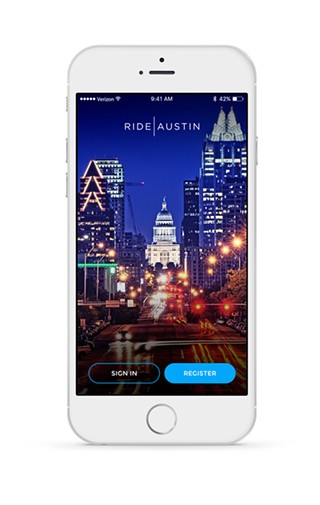 Adding to the growing number of ride-hailing options in Austin since Uber and Lyft’s wholesale evacuation, a new nonprofit, community-based app called RideAustin was introduced today at the Alamo Drafthouse on South Lamar.

The app is being described as “innovative,” as well as made “by Austin, for Austin,” according to Joe Deshotel, RideAustin’s PR representative.

The initiative is a collaboration of Austin-based tech entrepreneurs and community leaders, for service that “[brings] the community together to build local solutions for Austin’s ridesharing future.” Formed as a nonprofit, and led by billionaire Austin tech giant and Trilogy founder Joe Liemandt and Crossover founder Andy Tryba, RideAustin’s overarching goal to become a “community asset,” per Deshotel, begins with uniting tech advancement with social responsibility.

Only two weeks in the making – Deshotel himself joined the group a week ago – the app joins Get Me, zTrip, Wingz, and still-in-the-works Warp Ridesharing. The RideAustin app will go live for iPhone users this morning, with service starting in June. (The Android version of the app is also expected to roll out in June.) Prospective drivers can start the on-boarding process, and get themselves scheduled for fingerprinting.

Blue-sky success would involve a smooth scale out from its initial services areas: the Austin-Bergstrom International Airport and the Downtown area, for which exact parameters haven’t been set. Not having “to worry about shareholders” as a nonprofit, it “will allow drivers to earn more [RideAustin will take a smaller than industry-standard commission] and riders pay less while helping local charities.”

Initial ride pricing itself is unknown, but unlikely to be as low as Uber and Lyft, at least to start. As reported previously, the best current option, Get Me, has been struggling with driver/rider matches, often forcing riders to wait longer than 10 minutes – Uber took an average of three minutes – and pay significantly higher prices.

Two unique RideAustin app features include a fare roundup option and “optional surge pricing,” says Deshotel. The fare roundup feature would allow riders round their fares up to the next dollar over the fare, to be given to a choice of as-yet-determined charities.

The more interesting (and potentially problematic) feature, optional surge pricing, would allow riders to opt-in to surges, allowing them first ride at premium cost. Riders electing not to opt-in, or financially unable to do so, will remain in driver queues, placed behind those accepting surge pricing. Though RideAustin is surely a business in all contexts, even with its additional aims at targeting the underserved and disabled, locating balance will be paramount, and could throw its first-look presentation as community-facing into immediate question.

The oft-discussed background checks will include having drivers “fingerprinted beyond the city standards,” a cost RideAustin is paying for. At least four Austin locations have been tabbed as fingerprinting sites, with another potential site in Pflugerville. Extensiveness and markers for positive and negative background check outcomes are unknown/undisclosed.

Deshotel says drivers must maintain their own insurance, which as of Jan. 1, requires TNC drivers to have 50/100/25 coverage when the app is on, even if a rider isn’t present. This means $50,000 per person injured in a wreck, up to a total of $100,000 per accident and $25,000 in property damage per accident. RideAustin must also provide $1 million in coverage for drivers when they are providing rides.

Data collection and sharing is critical for the app, says Deshotel. RideAustin plans to “make all application data [short of rider identification] public,” including best times for rides for riders, usage data for driver use, and information useful to the city’s transportation planning efforts.

Look for more on RideAustin in this week's issue of the Chronicle. To visit the company's website, click here.

Editor's note: This story has been updated to clarify that RideAustin riders can round up their total to the next dollar amount and donate the difference to charity. Additionally, this story has been updated to correct the assertion that drivers must carry $1 million in insurance coverage while they're driving for RideAustin. It is RideAustin that must provide that portion of the insurance coverage.