Lt. Gov. calls for resignation of Ft. Worth superintendent 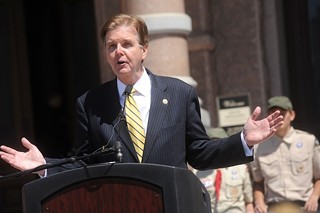 In protest of guidelines that would accommodate transgender students, Lt. Gov. Dan Patrick is bullying Ft. Worth ISD Superintendent Kent Scribner into relinquishing his position.

The anti-LGBTQ state official from Houston meddled in the Dallas-area school district after it approved rules in late April that requested school district employees acknowledge and support students' gender identity and expression, the Texas Tribune reported. Employees must also keep a student's actual or perceived gender identity and expression private (even when it comes to their parents) unless there’s a need-to-know basis or if the student allows it.

In response, Patrick attacked Scribner’s professionalism and urged him to resign. “After less than a year as superintendent, Dr. Scribner has lost his focus and thereby his ability to lead the Fort Worth ISD," said Patrick in a statement. "He has placed his own personal political agenda ahead of the more than 86,000 students attending 146 schools in the district by unilaterally adopting 'Transgender Student Guidelines.'” Scribner has held firm, recently telling the Ft. Worth daily he would not leave his post. “I’m proud of these guidelines,” he told the Fort Worth Star-Telegram today. “I think they provide educators with the ability to make all students more comfortable and confident in a learning environment." (To stir things up even more, Patrick plans to host a press conference at the ISD building this afternoon.)

The backlash from Patrick comes on the heels of legal shots fired by the U.S. Department of Justice and North Carolina over the state’s so-called bathroom bill that bans trans residents from using the restroom that corresponds to their gender identity. On Monday, Attorney General Loretta Lynch deemed the law “state-sponsored discrimination” and unconstitutional. Lynch said the anti-trans law imposes harm to an already vulnerable population: “What this law does is inflict further indignity for a population that has already suffered far more than its fair share. This law provides no benefit to society, and all it does is harm innocent Americans.”

Not moved by the compassion, Attorney General Ken Paxton issued his support for North Carolina Gov. Pat McCrory, shortly afterward, writing, “One’s sex is a biological fact, not a state of mind, and this threat to North Carolina is the latest in a long series of efforts by an unaccountable federal executive branch.”

Both Paxton and Patrick have cranked up the anti-LGBTQ fervor as of late. The two top state conservative officials recently denounced retailer Target for its trans-inclusive restroom policies ­– Patrick linked to a petition to boycott Target on his website while the AG warned the policies could lead to “illegal or inappropriate activity.” Patrick, who last session gave his full support to a resolution that opposed same-sex marriage and vigorously fought against Houston’s Equal Rights Ordinance, wrote on social media: “I'm totally disgusted with the threats from sports teams, entertainers, and some major corporations who want to punish cities and states who want to keep men out of ladies' rooms. The world has gone mad and we must stand and fight.” The lite guv has signaled he’ll boost legislation, similar to North Carolina, prohibiting transgender Texans from using the restrooms of their choice. And it’s likely he’ll get legal backing from the AG’s office, now stacked with anti-LGBT culture warriors determined to erode non-discrimination rules, thanks to Paxton.

“The Lt. Governor and Attorney General demonstrated today that they are blinded by transphobia,” wrote Chuck Smith, CEO of LGBTQ-rights advocacy group Equality Texas. “By fueling hysteria and creating panic where none need exist, the Lt. Governor appeals to the worst chapters of our history, in which discrimination runs rampant and understanding and compassion are absent.” The group notes the Ft. Worth ISD guidelines are consistent with federal law and Patrick’s uproar will only potentially jeopardize federal education dollars and pose the same economic risk now facing North Carolina.

“The demands by the Lt. Governor and the Attorney General that we should ignore federal law are not only dangerous and economically risky, but also demonize transgender students, many of whom are forced to drop out of school because of the constant bullying and aggression they face.”