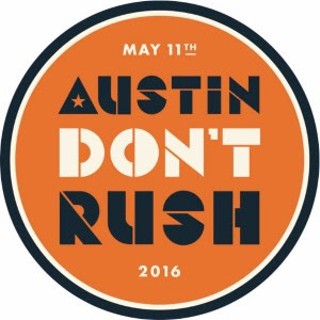 Mayor Steve Adler, as part of his efforts to decrease Austin's traffic misery, has announced that Wednesday, May 11 will be "Austin Don't Rush" day.

Adler, who asked that Austinites stay home on March 11 when President Barack Obama was in town for SXSW, is now working to convince drivers to avoid being in their cars during rush hour next Wednesday. "This is an attempt to recreate the traffic flow when people stayed home because the President came to town for SXSW, and Austin saw traffic times drop by half on MoPac and by about half that much on our downtown streets," Adler wrote in a press release.

To that end, the mayor's office announced today various incentives to convince commuters to take part. (Strangely enough, none of them involve Uber or Lyft. Wonder why that is.)

Service on all CapMetro buses, trains, and special access vehicles will be free all day May 11.

Austin B-cycle will offer free 24-hour memberships to people who use the code 051116. Those taking advantage of the deal will also receive a code to access one free month of Austin B-cycle's Local 30 membership.

Zipcar is offering $15 memberships from now until May 11, as well as a $25 credit. (Click here for details.) The mayor's office notes that the purpose of this particular deal is to help people who want to leave their cars at home during rush hour, but might need a car available once they're at work.

Car2Go is currently offering free registration and 15 free minutes with the promo code C2G15. Membership can take between 2-4 days to activate, so you probably need to register soon to be able to use this particular deal next week.

Metropia users (the mayor's office helpfully explains that "Metropia is an app that helps you plan your travel and avoid traffic") will get bonus points for not driving during the hours of 7-9am and 4-6pm or for carpooling.