He hopes to be declared innocent of the Yogurt Shop Murders

Attorneys for Robert Springsteen were in Texas’ 3rd Court of Appeals last Wednesday, April 27, to argue that their client should, under Texas’ Declaratory Judgment Act, be given the opportunity to prove his innocence in a civil suit. 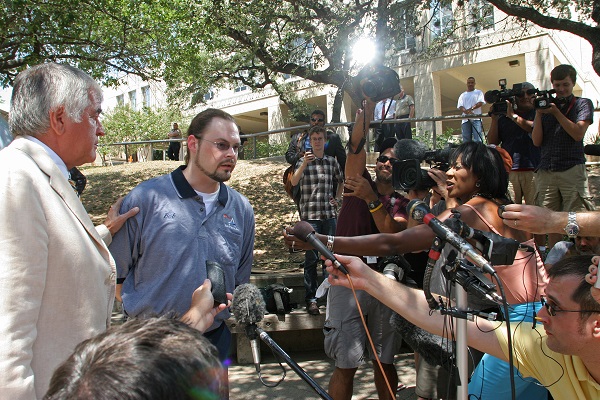 Robert Springsteen speaks at a press conference following his release from prison in 2009. (photo by Jana Birchum)

Springsteen, one of four arrested for the 1991 Yogurt Shop Murders, was convicted and sentenced to death on May 30, 2001. Although Springsteen initially confessed to the murders, he had, by the time of his trial, recanted, saying his confession was coerced. Springsteen’s death sentence was converted to life in prison after the U.S. Supreme Court in 2005 ruled that juvenile offenders could not be put to death. (Springsteen was 17 at the time of the murders.)

In 2009, the Travis County District Attorney’s Office dismissed the charges against Springsteen – as well as another defendant, Michael Scott – after new DNA testing revealed the profile of an unknown male taken from a vaginal swab collected from one of the four victims. Since, he has twice sought compensation for his wrongful imprisonment (a total in excess of $700,000); however the state comptroller has denied his claims due to the fact that Springsteen has not been declared actually innocent.

Such a declaration was at the heart of last Wednesday’s hearing. Springsteen’s lead attorney Broadus Spivey argued that, given the opportunity, he could absolutely prove Springsteen’s innocence in the murders. Springsteen is appealing the Travis County District Court’s ruling denying him a civil trial; he has also tried and failed to obtain a new trial in Bexar county court, and in federal court. Travis County prosecutors have been hesitant to declare Springsteen innocent in part because they say he is still considered a suspect in the murders and subject to new charges. They argued before the appeals court’s three justices that Springsteen should not be granted an appeal because civil courts lack jurisdiction to issue rulings on criminal charges.

Springsteen, who now lives in West Virginia, was not present at the hearing. Spivey told the Chronicle that Springsteen won’t return to Travis County unless granted the protection afforded to him at trial.

The court has no designated date in which it needs to issue a ruling. Spivey said that a decision could come next month, or in three years.