Adler to Vote "Against" Prop. 1

Mayor Stephen Adler took a break from celebrating the anniversary of his wedding Monday to proclaim his official opposition to the tenets of Proposition 1. “I believe such a vote puts Austin and the rideshare companies constructively back at the negotiating table,” proclaimed Adler during a press conference outside of City Hall.

The Mayor’s endorsement against the proposition – a transportation network company-scripted ordinance that would re-establish the previous Council’s rules for TNCs (as first agreed upon on a temporary basis in the fall of 2014) as a permanent standard of city law – on the first day of early voting for the May 7 election, which is devoted solely to Prop 1. Adler stressed that the proposition is a city divider in its most basic form, one that will present a clear-cut winner and subsequent loser. He considered that neither option – support for Prop 1 or a vote against the TNCs’ efforts – “delivers by itself what we need.” His rejection of Prop 1 derives from the fact that a failure to pass the proposal would give the city and the TNCs more time to negotiate a happy medium.

City staff has spent much of the past year-and-a-half going back and forth with Uber and Lyft in an effort to find that happy medium, but have thus far been unsuccessful. The most recent large-scale failure – a January effort from the mayor to implement a Thumbs Up program offering rewards and incentives to drivers who choose to get fingerprinted (appeasing the city to the ire of Lyft and Uber) – fell flat both at Council and the negotiating table. Questioned Monday why future negotiations may prove more fruitful, Adler stressed that the Thumbs Up concept came during a stressful time in the TNC saga, and that he may have been guilty of issuing a proposal to Council without giving those along the dais enough time to vet the idea. He thought that a more open-ended negotiating period, conducted at a time in which posturing among the two parties wasn’t riding quite so high, may yield better results.

Former Mayor Lee Leffingwell, who joined the pro-TNC coalition Ridesharing Works for Austin in a paid capacity as chairman this month, responded shortly Adler’s announcement. “Our leaders and voters should … protect against being distracted from the real issue by special interest groups and outside influences,” said Leffingwell, whose coalition has received more than $2 million in funding from Lyft and Uber, both of which are headquartered in San Francisco. "We need to focus on how this issue affects Austin.”

“I cannot disagree more with the U.S. National Chamber’s message, and their tactic,” he said. “The great irony is that I was traveling with the Secretary of Transportation Anthony Foxx all of last week speaking in three countries about how Austin is an international leader in innovation. The Secretary’s mobility challenge deals not only with new technologies, but also with finding the right compact between government and business on issues such as Open Data, avoidance of proprietary systems, standardization, and I believe, with finding the right place for government to support the new sharing peer-to-peer economy without abdicating in public safety responsibility.” 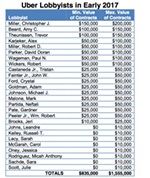