Council Recap: A Dissent Into Satanism

The next time a constituent complains about Council wasting time, last week’s unnecessary debate will surely be high on the list of examples. 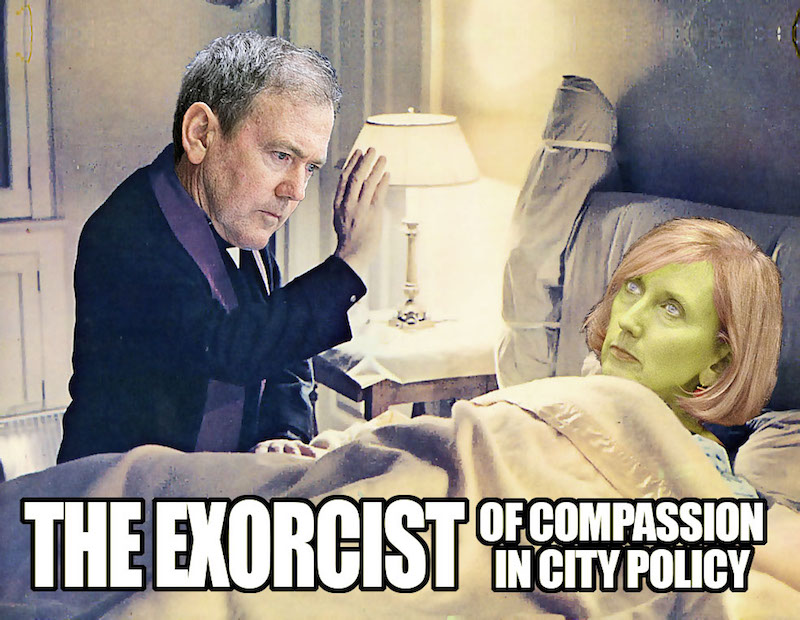 What should have been a non-controversial, simple vote on a largely symbolic, feel-good measure turned into a ridiculous dissent regarding its parallels to Satanism, thanks to CM Don Zimmerman. On Thursday, April 14, Council considered a resolution (Item 5) to include the City of Austin in the "Compassionate Communities Campaign," a program adopted in other Texas cities such as Dallas, Houston, and San Antonio, that encourages treating all human beings with “justice, equity, and respect,” and promotes taking care of the earth by recycling and following environmental sustainability.

As the Chronicle previously reported (“Council: Members Spar on Affordable Housing, Meaning of Compassion,” April 15), Zimmerman, a devout Christian who isn’t sold on the science behind climate change, criticized the measure as too religious, while also bashing it for promoting idolatry of the Earth but not Jesus Christ. He also took issue with its supposed implication that Austin is not a compassionate city. CM Ann Kitchen, again reiterating the resolution wasn’t meant to be religious nor a statement that implies we don’t encourage compassion, respectfully took his concerns into account and revised the resolution. Among the changes to placate Zimmerman: de-capitalizing the “E” in Earth; replacing "spiritual" with "emotional"; removing "Serve The" before Earth; and deleting its aim to help especially those "most at risk.”

But Zimmerman had changes of his own in mind. Knowing it wouldn’t fly with Council, but trying to make a very convoluted, time-consuming point, Zimmerman sought to add, “Jesus of Nazareth recorded in the New Testament as saying, the scriptures say, you must worship the lord your God, and serve him only.” He also moved to amend the resolution by adding, in part: “One should strive to act with compassion and empathy towards all creatures in accordance with reason; One’s body is inviolable, subject to one’s own will alone; the spirit of compassion, wisdom, and justice should always prevail over the written or spoken word.” After Kitchen accepted the latter amendment but not the former, overtly religious one, Zimmerman revealed he had played us all with a gotcha moment: While displaying the webpage on a screen, Zimmerman divulged the language came straight from a Satanic Temple website. The point? To show how similar it was to the Charter for Compassion, the text the resolution is based on, and thus, its religiosity.

The Charter’s clauses are accepted, “under the excuse that they're not religious,” said Zimmerman. “But they are religious. I think you would insult my Satanist constituents … so I can't understand why the biblical reference can't be accepted.” After about 30 minutes of debate Mayor Steve Adler tried shutting down the absurdity. “My concern is that we're spending, one, a lot of time on this … I just don't want to allow a meme that says that we had an amendment that the author sourced back to a Satanic website, just because I think it will cloud the overall message of the symbolic measure that we are trying to pass,” said Adler. Or, for a stronger indication of Adler’s mood: 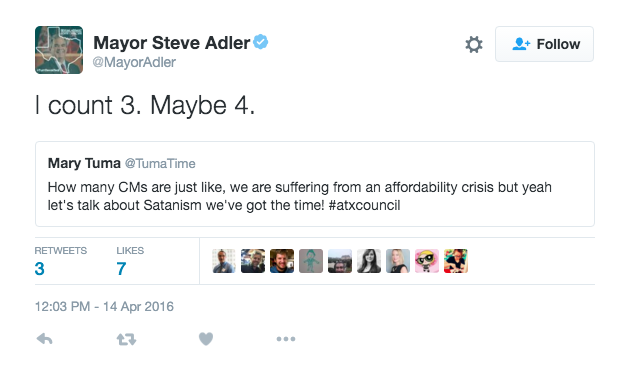 In the end, Zimmerman decided he couldn’t side with the Beelzebub-loving camp. “I'm virtually certain I have a few constituents that are, you know, Satanist worshipers, but I just can't go with them on this one … I can't represent everybody. I can't go with the devil on this,” he said. We’d like to add, “Be it resolved, amen.”

In non-Satanic Council news: CMs passed a resolution (Item 3) to ensure employees and contractors at the [re]Manufacturing Hub at 10108 FM 812, an economic redevelopment project meant to attract remanufacturing, recycling, and reuse businesses, will be given living wages. The resolution directs the city manager to develop a solicitation process that gives preference to businesses that hire in low-income, high-unemployment areas, and construction contractors and subcontractors that are Better Builder certified. It also favors businesses that opt for “labor peace” agreements, which discourage bosses from stopping unionization if employees don’t picket. CMs Ora Houston, Ellen Troxclair, Sheri Gallo, and Zimmerman voted against the Greg Casar-sponsored resolution. Gallo and Houston saw the measure as rushed through and complained that there wasn’t enough time for businesses in their districts to bid for contracts at the Hub while Troxclair and Zimmerman criticized the wage standards for possibly hurting taxpayers. Arguing that the higher wages could result in contractors charging the city more money, Zimmerman said, “I see no statement in here about how our taxpayers are going to be affected by this requirement.”

And what was expected to be a heated debate on gentrification and encroachment on an Eastside neighborhood was delayed. Discussion on rezoning property (Item 16) to make way for One Two East, a controversial development on E. 12th and I-35, was postponed until Aug. 4, at the request of the developer. (Developer Steve Drenner asked to move it to May while Robertson Hill neighborhood resident Erin Stanrich requested September; August stood as the compromise.)

Council also gave the second stamp of approval to an ordinance (Item 6) that limits public testimony time at City Council and Committee meetings to 90 minutes for each agenda Item and tacked on an additional rule that limits testimony time after the 20th speaker from three minutes to one minute.

-Passed a resolution (Item 7) that directs the city manager, in collaboration with Capital Metro, stakeholders, and city boards and commissions, to develop recommendations for a transit priority policy. Goals and metrics for transit priority (like improved safety and efficiency of transit service); identifying which corridors should be focused on; and possible service agreements with Capital Metro are among the considerations. A final report to the Council Mobility Committee is due by Oct. 5.

-Approved a resolution (Item 4) to direct the city manager to develop recommendations and funding options for Child Care Continuity Services, which provides services for those currently seeking employment after graduating from a workforce development program or dealing with recent job loss.