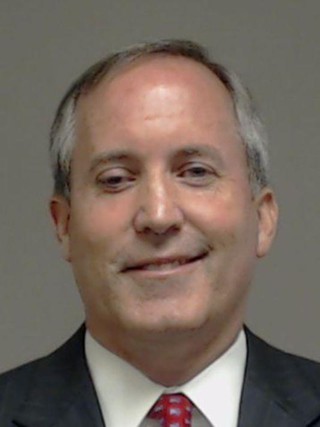 Ever wondered what Ken Paxton was thinking about when they took his mugshot?

The Exxxotica event in Dallas is one of four yearly shows, with others held in Columbus, Ohio; Edison, New Jersey; and Chicago. After a successful event in 2015, organizers Three Expo Events LLC wanted to return in 2016. However, in February the Dallas City Council voted to deny them access to the center. The firm immediately fired back with a lawsuit arguing that this it is a public space, and therefore denying them access just because the council didn't like their (perfectly legal) content was a violation of the First Amendment.

In a statement, Paxton said, “The City of Dallas, through its democratically-elected officials, has rightfully decided that its convention center should not be home to an event where obscenity and criminal activity occurs. A federal court should not overturn that decision by elected officials.”

The brief tries an intriguing end run on Exxxotica's constitutional argument. Basically, it comes down to where the city puts the convention center in its budget: under key focus area 2 ("economic vibrancy") rather than 4 ("Culture, Arts, Recreation, and Education.") Their argument is that the center is a commercial, not public, endeavor, and so the city can pick and choose customers. Since Exxxotica might scare off, say, the National Anti-nudity Association's annual convention.

Paxton added, “It is vital that governmental entities have the ability to exclude sexually-oriented businesses from property that they own.”

Now, no one wants to accuse Paxton of rank hypocrisy (not like, for example, Ted Cruz's former roommate Craig Mazin calling the presidential hopeful out on Twitter for a newfound opposition to people who "stimulate their genitals"). However, this does raise an old specter for Republicans from the 2015 session. During the 84th Legislature, Rep. Jason Isaac, R-Dripping Springs, authored House Bill 3866, which would force local authorities to rent out publicly owned venues to gun shows, and do so at the lowest possible rate.

Now the bill never even passed out of the House, and then-Sen. Paxton never got a chance to vote on it, but it's hard to imagine that there won't be a few awkward conversations there (especially in the wake of UT Austin's extremely apposite cocks not glocks protest against guns on campus. In fact, when Exxxotica filed the suit against Dallas, attorney Roger Albright said, "For the same reason the City Council can’t ban a gun show, it can’t ban an Exxxotica show.”

So if an HB 3866 successor turns up in the Legislature next session, the author better be hoping that Paxton et al lose. After all, if they win, then the argument is that city councils and local authorities can deny a commercial client if they think they will damage the overall attractiveness of the venue to other potential lessors. Paxton argues that Exxxotica is out of line with local business interests, but the number of "no guns here" signs in Austin supports the idea that many local firms think firearms are bad for business. Considering Travis County has already had this argument, it's easy to see where a pro-Dallas ruling could help them.