Farewell to Junior the Wendy's Guy 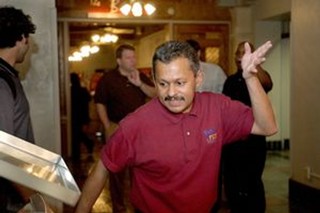 Junior the Wendy's Guy, a UT institution (Image via GoFundMe)

For years, he was a friendly face around the Texas Union: running around with a smile, taking everyone’s orders, and making a fast food joint into something a little special. To staff and students, he was Junior the Wendy’s Guy, and he sadly passed away on Monday.

Junior (his real name was Ishmael Mohammed, but everybody always knew him as Junior) was always there with a big smile and a handshake, so well liked and well known that he won a Best of Austin: There's even a short film about this larger-than-life, record setting personality (see that below.)

Sadly, he faced some tough times in his later years. After over a decade at the Texas Union Wendy’s, he left Austin to return to his native New York. However, he came back and ended up tragically homeless in 2014. Back then, the community came together, launching a massive fundraising operation to get him in temporary housing. That's how much he meant to people, just from selling fast food with love and energy. His daughter, Kimberly Guerin, said, “His life was that Wendy’s job. It really kept him going, and when he was no longer there, he was not the same person.”

Junior was found unconscious at a bus stop on Friday in Austin, and medical examination showed that he was suffering severe bleeding in the brain. Unfortunately, surgery was unsuccessful, and he passed on Monday morning.

Since his death, Guerin has launched a GoFundMe campaign. Initially, Guerin was planning to use the money to pay for her father’s funeral. However, since then the company that her half brother, Zachariah Ishmael Mohammed, works for has said it will cover the costs of the cremation. So now Guerin has decided to use the money to pay for a celebration of her father, and a chance for everyone who knew him to come together and share stories.

While he was not always a part of her life, she and his surviving relatives know that he was beloved by many, and she wants the event to be an opportunity for everyone he touched to be connected. “That’s what he would have wanted,” she said, “for everybody to get together. He was a very social person.”

To contribute to the memorial event fund, visit the GoFundMe campaign. We'll have details of the celebration of Junior's life as soon as they are available.