Police have made an arrest in the murder of 18-year-old University of Texas student Haruka Weiser. Friday morning, the Austin Police Department confirmed that 17-year-old Meechaiel Khalil Criner will be charged with first-degree murder. 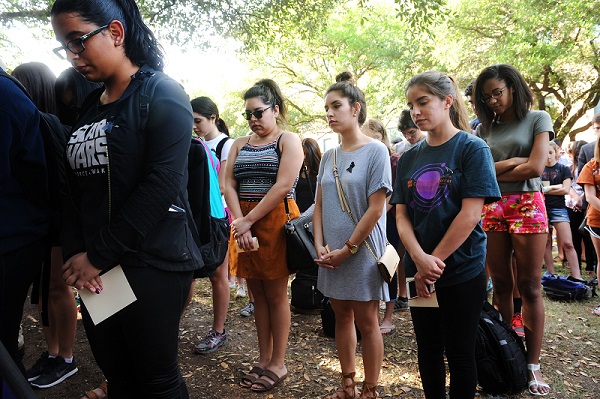 A vigil on the UT campus was held for Haruka Weiser April 7. (photo by John Anderson)

Criner is the same person police identified on campus surveillance cameras as a suspect in the murder. He was booked into the Travis County Jail at 2:05am Friday, April 8, after authorities apprehended him at the LifeWorks South Austin Youth & Family Resource Center on South First Street.

Authorities knew Criner was at the shelter because APD officers delivered him there on Monday. He was found that day near the scene of a trash fire on the 2900 block of Medical Parkway that brought out the Austin Fire Department and APD. An officer who spoke with Criner determined that he was homeless, and gave him a ride to the South Austin shelter. At a press conference Friday, Police Chief Art Acevedo said that Criner possessed the red or pink girl’s bicycle mentioned at Thursday’s press conference, as well as a small blue backpack that resembled the one Weiser carried. (AFD took the bike into its possession at the scene of the fire.)

Firefighters at AFD Station 3 – 201 W. 30th Street, near campus – were reminded of the call to Medical Parkway after seeing the surveillance footage APD released from the night of the murder on Thursday. They noted the similarities between the man seen on the video and the man found near the fire, and alerted APD.

Investigators brought up the DMAV footage recorded from Criner's ride to the shelter on Monday and determined he was the same person on the surveillance cameras; he was wearing the same pants and shirt, and still carried what looked to be Weiser’s bag. An officer went out to the scene of the fire and located several items Acevedo says APD believes belonged to Weiser.

APD then sent another officer to LifeWorks, where Criner was detained without incident for tampering with evidence (trying to burn Weiser’s belongings) and brought in for questioning. Criner is now being held at TCJ, where he’s expected to formally booked on murder charges this afternoon. Acevedo said he expects additional charges to be levied against Criner.

Acevedo said that the investigation is ongoing, and declined to reveal any more information about Weiser’s murder. He suggested that the UT community can rest a little easier now. “We are very certain that the person we have in custody is responsible for the death of this young woman,” the chief said.