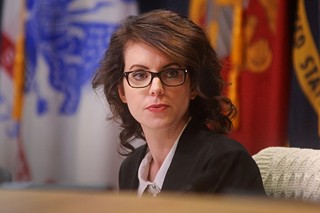 With Mayor Steve Adler back on the dais, City Council passed measures during its April 7 meeting related to affordable housing, ground transportation chauffeurs, excessive water bills, and zoning to allow for a Boys and Girls Club facility in District 1.

As requested by Council Member Ann Kitchen, Council passed through the first part of an ordinance (Item 17) that requires ground transportation chauffeurs (i.e. taxi, shuttle, and limo drivers) to submit national criminal background checks, rather than just Texas-based checks, when applying for permits. The measure brings chauffeurs up to speed with the same requirements as TNC (Uber, Lyft) drivers, who must also submit national checks. The second and more controversial part of the ordinance, which listed the specific offenses that would bar chauffeurs and TNC drivers from operating, is being held and worked on. CM Greg Casar noted that banning drivers based on some of the listed offenses, like one-time theft, could be seen as too harsh.

A measure (Item 24) by CM Delia Garza asks the city manager to explore the feasibility of using part of the unallocated 2013 affordable housing bond ($30 million of the total $65 million) for permanent affordable housing aimed at residents at or below 80% of the median family income – in other words, middle-income residents currently unable to afford homes at market rent. Garza’s resolution additionally directs city management to convene a working group that includes the UT-Community and Regional Planning Department, the Austin Board of Realtors, AISD school districts, affordable housing advocates, experts in land-use policy, and others to craft other policy ideas to widen opportunities for homeownership for residents between 80-120% MFI. Initial findings should come before Council by June 14 and a final report no later than Aug. 2.

Expectedly, CM Don Zimmerman – a vociferous opponent of subsidized housing – slammed the feasibility measure as giving way to “permanent government dependency” and “institutionalizing permanent economic segregation.” Adler took a moment to calmly counter Zimmerman’s indignation: “I would need to disagree … If we don’t do something [about rising housing prices], we will lose diversity. We won’t be the live music capital of the world because musicians won’t be able to afford to live here. We will continue to lose people and communities. I think when you exercise a program like the one in this resolution you create not segregation but opportunity for geographic dispersion for affordable housing.” Needless to say, Zimmerman stood as the lone (and enthusiastic) dissenting vote.

Council members got on board with an adjustment policy by CM Ellen Troxclair that seeks to remedy unexpected, unusually high water usage bills. Last summer, several Austinites started getting hit with excessive bills – from Aug. 23, 2015 to Jan. 1, 2016, Austin Water received calls from 23,944 customers related to high water charges. Troxclair’s Item 23 would allow customers experiencing bills three times their average to submit an application and, if approved, get a credit up to 50% of the water usage once every two years.

Tensions ran high during a zoning case (Items 35 and 36) that proposed changing single-family to community commercial to make way for construction of a Boys and Girls Legacy Club building in East Austin’s University Hills Neighborhood. Former and current Boys and Girls Club members testified before Council on the positive and meaningful impact the youth-oriented nonprofit, which serves children below the poverty line, has had on their lives while University Hills Neighborhood group leaders criticized the plan as ruining the fabric of their community. The building would lead to increased traffic and stymie opportunities for affordable housing in the lot, group members testified. CM Ora Houston quelled neighborhood group’s fears that the proposal was just an “attempt to increase underlying entitlements on the property” by striking a trade-off that prevents most of the uses the zoning allowance permits (with the exception of outdoor and indoor sports recreation) in the event the Boys and Girls Club for some reason sells off the land after the zoning change takes place. The measure passed on first reading. Houston, speaking critically of how land development code is negotiated (rather than enforced) and thoughtful neighborhood plans are chipped away when land speculation comes into play, asked CMs to consider a January 2015 column by Chronicle publisher Nick Barbaro: “This Council can do us all a favor, and cut their workload in half at a stroke, if they just send a clear message to the Planning and Development Review Department that they're going to stop entertaining idiotic contested zoning change requests, and treat existing zoning as what it is – the law – rather than as a starting point for negotiations, or as one side in an expected 'compromise' between what the developer wants, and what the law says they can build,” Houston read.

In a lengthy executive session, CMs continued their ongoing talks about City Manager Marc Ott’s performance. The conversations have been “good and constructive,” said Adler, issuing the only hint of progress.

• Following recommendations from the City Clerk, Council voted to revise electronic campaign finance form rules (Item 6) to align with the same deadlines as the Texas Ethics Commission filings and reformat all forms to PDF. A trio of amendments by Kitchen requires a candidate or political action committee to stick to the city’s deadline, essentially disclosing independent expenditures (changed to “direct campaign expenditures”) twice. Noting that the city’s reporting is more frequent than the state’s, Kitchen applauded the alignment but sought to maintain transparency with the amendments. Under an amendment by Adler, candidates who loan personal funds to their campaigns in the amount of $10,000 (previously $25,000) nine days before 5pm on the day before an election must adhere to the new rules.

• Passed measures (Items 28 and 29) allowing developers of student housing to relocate the historic Dabney-Horne House in West Campus (507 W. 23rd) to sit next to the Clyde Littlefield House at 901 Shoal Cliff Court, a property once owned former UT track coach Clyde Littlefield. Council also allowed historic zoning for the Twenties-era Littlefield home. The Dabney-Horne House spot will turn into a new, 175-foot student housing development with 10% reserved for affordable housing at 60% MFI. Houston said she wasn’t able to support historic designation for the Littlefield House due to the Texas Relays history of prohibiting African-Americans from participating during segregation. Houston said she could not be part of allowing historic designation of a house “honoring that kind of legacy in our city and university.”

• Passed an ordinance (Item 19) on first reading that limits public testimony at both Council and committee meetings to 90 minutes for each issue.

• Approved purchase of furniture and fixtures for the new Central Library (Items 13-15).

• Approved a contract with the Sustainable Food Center to increase funding (not to exceed $110,156 for a total contract amount of $179,436) for the Double Dollar Incentive Program to help SNAP/WIC recipients purchase fresh produce at SFC Farmers' Markets.

• Authorized a $160,000 social services agreement with the Salvation Army for childcare and supportive services for homeless families in the Passages Program.

You can check out the agenda items and video of the full meeting here.