In a win for social service and health advocates, City Council passed two separate items during its Thursday, March 31 meeting that direct funds to assist vulnerable populations – but not without a fight (or, at least some heavy questioning) from conservative-leaning Council Members Don Zimmerman and Ellen Troxclair. 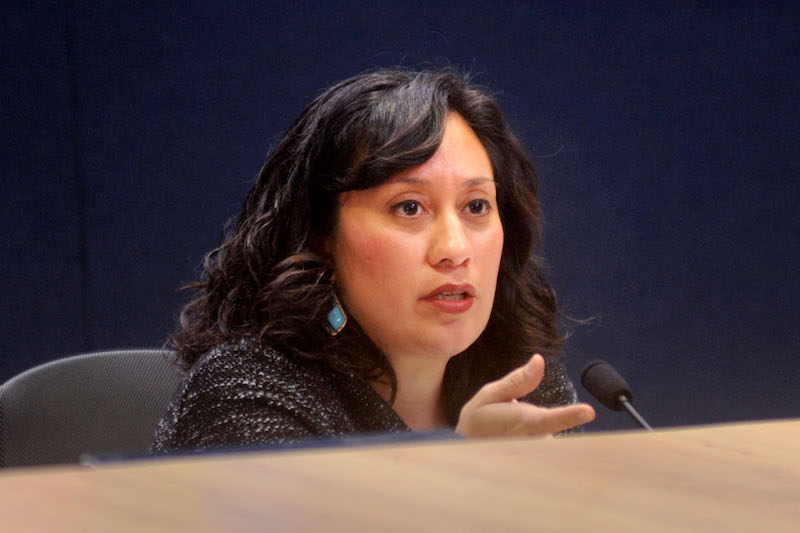 Council Member Delia Garza: “We can continue to support our low-income families or we can become a city where only wealthy people can live." (Photo by John Anderson)

The first measure (Item 19) approved agreements with 13 agencies – including Caritas, Any Baby Can, and Child Inc. – to increase funding for “self-sufficiency social services” by $2,282,238 for a total combined amount of $40,319,844 for a 37-month term from Sept. 1, 2015 through Sept. 30, 2018. It comes after Council vowed in December 2014 to up its investment in social services, adopting a policy goal of giving $15,763,307 of added funding for social service contracts within three to five years. They followed through in the 2015-16 budget negotiations by green-lighting $1,825,000 in additional funding for those contracts. Based on service provider input collected in December 2015, the city’s Health and Human Services Department, as part of its allocation strategy, said it would increase existing social service contracts by 6%, with some exceptions. Item 19 was simply the implementation part of that strategy and so, to most council members, already a done deal.

But Zimmerman, hesitant as ever to invest taxpayer money, took issue with what he considered weak performance metrics and a lack of accountability. “I am dumbfounded that we would be asked to approve negotiation and execution and give up $40 million dollars of taxpayer money with absolutely no evidence that we will achieve anything,” said Zimmerman, echoing his concerns from Tuesday’s work session. (The CM tried unsuccessfully to negotiate the performance objectives separately). Troxclair also chimed in later with a similarly critical line of questioning.

In retort, Council Member Ann Kitchen slammed Zimmerman’s critique as a “gross overstatement” – to say there is no accountability for the $40 million is simply not true, she said. She added later, the professional nonprofits aren’t just “acting on a whim.” CM Delia Garza also spoke in favor of the programs, saying they’re research-based and have demonstrable evidence of helping families in poverty. The boost in dollars, she reminded, is a result of trying to amend a historically underfunded HHS. “We can continue to support our low-income families or we can become a city where only wealthy people can live,” she said, to applause from audience members in support of Item 19. CM Leslie Pool said the role and mission of city government is to ensure “residents at the bottom end are not left in dire poverty.”

On the agency side, Jo Kathryn Quinn of Caritas, speaking on behalf of One Voice Central Texas, defended the program’s transparency and metrics, pointing to a 75% success rate of the 13-member coalition’s homelessness prevention program that serves some 2,500 vulnerable Austin residents a year. “All of these contracts intersect with the poorest, most vulnerable people in our community and they yield solid results year over year. This is one of the best investments our city can make,” said Quinn. The measure passed 8-2, with Troxclair and Zimmerman voting against and Mayor Steve Adler off the dais on city business.

The second related action (Item 20) approved an $1,050,000 agreement with six social service agencies to provide community based health prevention and education programs for a 12-month term beginning April 1. Mama Sana/Vibrant Woman Maternal Health Equity Program, UT’s Alliance Wellness Program for African American Health, and allgo’s LGBTQ People of Color Sexual Health and Wellness are among the agencies awarded funds. The increase in dollars were helped spurred by a May 7 resolution that gathered information on the city’s health and economic disparity and developed an “equity tool” to be used during the budget process. HHSD subsequently released a report assessing the racial and ethnic health disparities in the community. In December, the department put out a call to community-based groups that assist with maternal and infant health; African-American health; the elderly; LGBTQ residents of color; community and immigrant mental health. The item passed with Zimmerman and Troxclair again voting against.

In attendance, roughly 50 members of a coalition that includes Mama Sana/Vibrant Woman, allgo, ICE Out of Austin, and the Alliance for African American Health in Central Texas came out to support the health and social services items. Mama Sana and coalition partners have stood as dogged advocates of a funding increase for the vulnerable and marginalized, pushing the May 7 resolution after releasing their own report that posed the question, “Austin: A Family-Friendly City, but for Whom?” that highlighted stark minority health disparities, including high rates of poor prenatal care and infant mortality among women of color: 47.5% of Latina women and 36.5% of black women in Austin receive late or no prenatal care, compared to 16.7% of white women, they found.

Kellee Coleman of Mama Sana/Vibrant Woman testified in support of the item and said she’s pleased with the outcome but also dismayed with the level of opposition. “I felt like [Zimmerman] was being blatantly disrespectful to the most vulnerable of the vulnerable. There are about 5,000 people in his district affected by poverty, they are going to benefit from this,” Coleman told the Chronicle.

On a brighter note, Coleman believes the investment could not be achieved by the former Council and is a testament to 10-1’s commitment to bridging economic and health disparities. “This council is being more reflective of affordability. They are seeing we aren’t talking about wealth here, we’re talking about basic quality of life.”

Item 21: Approved a proposal by the developer of a Plaza Saltillo TOD to opt for a partial fee-in-lieu under the Density Bonus Program affordable housing requirements. The $93,000 fee will go toward building an affordable home on-site.

Item 7: Allowed a search for a construction contractor to renovate three sets of restrooms at ABIA.

Item 11: Approved a construction contract for improvements to the Davis Water Treatment plant.

Item 16: Postponed an ordinance that would revise the rules on how candidates fill out electronic campaign finance forms for April 7.

Item 29: Postponed a proposed contract for graffiti removal at city facilities and parks for April 7.